When Will 12oz Mouse Season 3 Premiere? 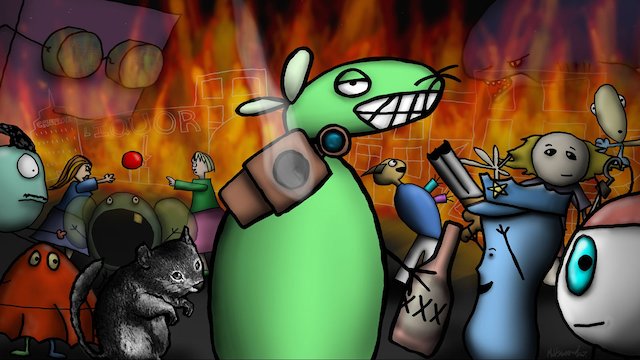 ’12 oz. Mouse’ is Adult Swim’s (AS) animated television series created by Matt Maiellaro (‘Aqua Teen Hunger Force’). Its original version aired on the channel from October 23, 2005, to December 17, 2006, spanning two seasons. After almost 12 years, in 2018, AS released a new clip from the series, while announcing the revival of the show. The rebooted edition is all set to hit screens this year and here’s everything you need to know about it.

Mouse Fitzgerald aka Fitz, the protagonist, is voiced by Matt Maiellaro. Fitz is an alcoholic, amnesiac, and anthropomorphic green mouse who constantly struggles to make sense of the world he feels trapped in. Shark, voiced by Adam Reed, is the owner of an employment agency and at times, takes the help of Fitz to do various odd jobs. Skillet is basically a chinchilla who never speaks while Rectangular Businessman (Kurt Soccolich) is a haughty pink male square. Buzby is voiced by Dana Snyder.

Rhoda, voiced by Dave Willis, is the one-eyed bartender and serves Fitz’s regular order of 12 beers. Man/Woman (Bonnie Rosmarin) works at the diner while Peanut Cop (Nick Weidenfeld) is a blue peanut-shaped policeman who is terrible at his job. Liquor (Matt Harrigan) owns Fitz’s regular alcohol store and Producer Man (Matt Thompson) is a loud, obnoxious guy who appears in many episodes.

Eye (Nick Ingkatanuwat) is a giant eye who recruits Fitz to murder Golden Joe while Golden Joe (Vishal Roney) is a loudmouthed wizard with a knack for rapping. Ms. Lady is an annoying woman in a green blouse and the New Guy is a weird red umbrella. Roostre (Scott Luallen) is a corn dog farmer and Pronto is a short, crude man without a torso. Rounding up the list of main characters is Lady Mouse (Melissa Warrenburg) who is Fitz’s imaginary wife while Birmingham is a mysterious person whose identity has not been yet revealed in the show.

In season 3, we meet a very old Fitz, who has now grown a mustache and is struggling with amnesia. He lives in a new city and Shark and Square Guy also make an appearance. They are planning to kidnap Fitz so that they can come back to the real world with the help of exterminator bee. Skillet, Roostre, Peanut Cop, Golden Joe, and The New Guy must escape the simulation with Fitz before Shark and Square Guy get to him first. The story takes off from here and follows the journey of the protagonists in this new quest.