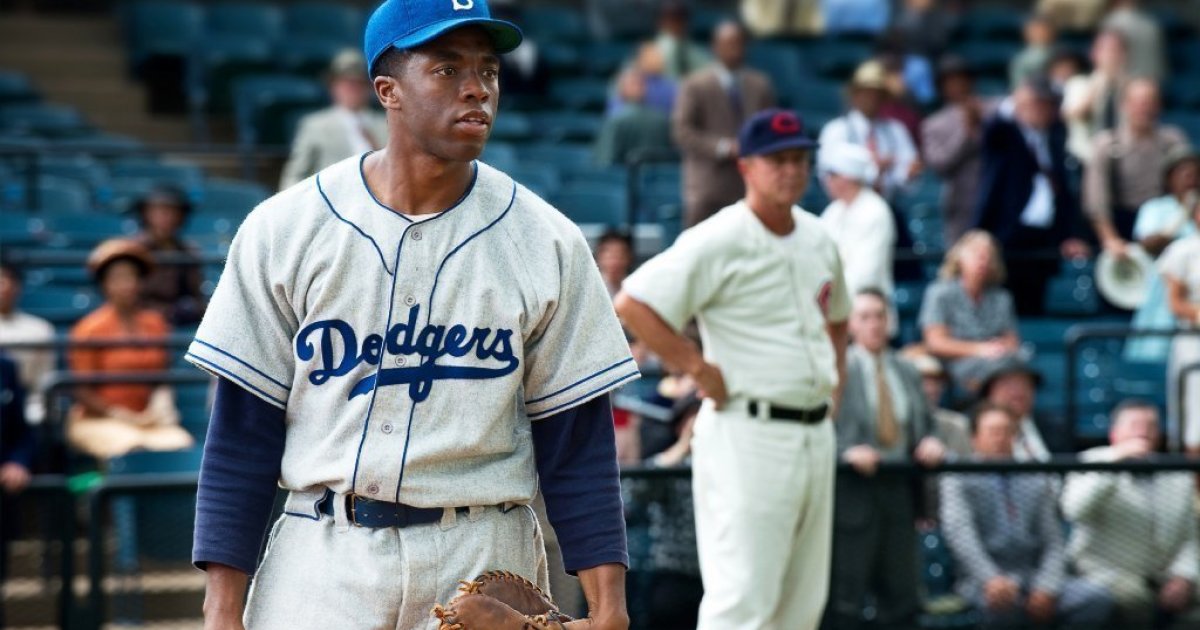 Sports stories are always great since they speak of a team effort and individual greatness. In ’42,’ the American biographical sports movie, we learn about the racial integration of Jackie Robinson, the professional baseball player. The title of the film refers to his jersey number, 42, which he wore throughout the career. It is an inspiring story, and you might be wondering where to stream the movie. We’ll get to that in a bit, right after we acquaint you with the premise.

’42’ tells the powerful story of Jackie Robinson, the first baseball player to break the color barrier in MLB. He joins the Brooklyn Dodgers, but before that, we see flashes of Robinson’s assertive side. When his teammates are at a gas station, the attendant denies Jackie the chance to use the washroom. In retaliation, Robinson states that they can find another gas station to fill up their vehicle, hearing which, the attendant relents.

Jackie’s stint with the Dodgers is not smooth either, with several players unwilling to play with him. The crowd’s hostile too, but Robinson has some people in his corner to show him the way. Ultimately, Jackie delivers some stunning performances, including a home run against the Pittsburgh Pirates. It sends the Dodgers to the World Series, where they go on to lose to the New York Yankees.

Netflix has a laudable roster of films and shows meant to cater to different viewers. ’42’ is not on the platform, but you can check out ‘Million Dollar Baby.’ Maggie enters the life of Frankie Dunn, who’s going through a painful estrangement with his daughter. His outlook changes when he sees Maggie’s determination in going pro and getting Frankie and his team to help her in the process.

Hulu keeps making smart additions to the platform and has the edge over a lot of streamers. The subscribers are rarely let down, but you cannot stream ’42’ on the site. We recommend that you check out ‘Creed II,’ which is a spin-off of the ‘Rocky‘ franchise. Adonis Creed faces the challenge of his life going up against the son of the man who killed his father.

Amazon Prime sources content from all around the world. It caters to different viewers, who are rarely dissatisfied with the content available. You can’t stream ’42’ on Prime, as is, but you can always rent or buy and watch the movie. Check it out here.

Where to Watch Stream 42 Online?

If you don’t have access to Amazon Prime, you need not worry. Check out ’42’ on iTunes, Google Play, the Microsoft Store, FandangoNow, YouTube, Redbox, and Vudu.

Where to Stream 42 For Free?

Sorry, but there is no way to watch ’42’ online for free at the moment. You have to wait until it arrives on a platform with a trial period. At this juncture, we’d like to urge our readers to pay for all the art you consume.