‘9-1-1: Lone Star’ is a procedural drama television series and a spin-off of ‘9-1-1.’ The show revolves around the first responders across fire, police, and ambulance departments of Station 126, specifically keeping firefighter captain Owen Strand in focus. He is a firefighter and a divorcee who moves from Manhattan to Austin (Texas) with his son. Created by Ryan Murphy, Brad Falchuk, and Tim Minear, the show initially premiered in January 2020.

Although the action drama received favorable reviews from the critics, it was criticized for its stereotype-laden portrayal of Texas. But on the whole, the series has gained a solid fanbase who are looking forward to more seasons of the show. The question is: will there be a ‘9-1-1: Lone Star’ season 2? Here is everything you need to know! 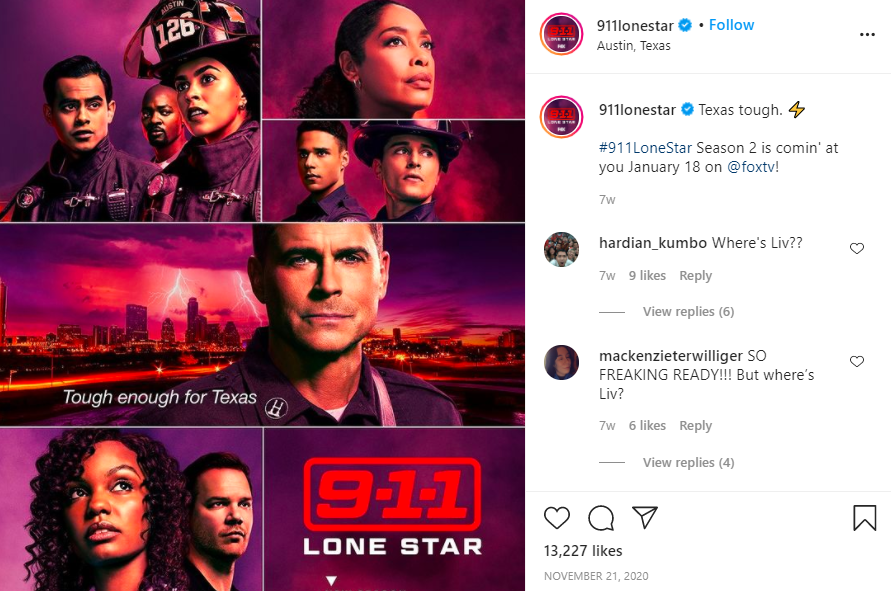 The ensemble cast of the show is helmed by Rob Lowe (Owen Strand). Ronen Rubinstein plays Owen’s son, Tyler Kennedy Strand AKA TK. The cast of the show also includes Sierra McClain (Grace Ryder), Jim Parrack (Judson “Judd” Ryder), Natacha Karam (Marjan Marwani), Brian Michael Smith (Paul Strickland), Rafael L. Silva (Carlos Reyes), and Julian Works (Mateo Chavez). Most of these principal cast members will be returning for season 2. Liv Tyler, who essays the role of Michelle Blake, will not be seen in the next season since the actress was unable to travel from London to Los Angeles for filming due to COVID-19.

Gina Torres has joined the cast to portray Tommy Vega, whereas Derek Webster will play Charles, Tommy’s husband. In season 2, we will also see Lisa Edelstein as Owen’s ex-wife and TK’s mother, Gwyneth. Season 2 includes a cross-over episode with ‘9-1-1.’ Therefore, Oliver Stark (Buck) and Ryan Guzman (Eddie) from the original show will make a guest appearance.

Season 1 ends with the Station 126 crew dealing with the aftermath of a solar storm. Michelle is in shock when she finds her long lost sister, Iris, living in a camp for homeless people. Even though Michelle and her mother try to bring her back home, Iris decides to continue living there. TK and Carlos reconcile after hitting a bump in their relationship.

As for season 2, here is what we can expect. In the season premiere, the Station 126 crew will respond to emergencies of a human pile-up and a military tank on the loose. The Coronavirus global pandemic will be a part of the upcoming season, especially as to how it affects the crew members of Station 126 individually. Gwyneth’s arrival is bound to shift dynamics in the Strand family as they will quarantine together, possibly rekindling some romance between Owen and Gwyneth.

Since Liv Tyler has exited the show, her departure will have to be incorporated into the upcoming season’s storyline. However, Minear has assured the viewers that the door will “always be open” for Tyler’s return. With the introduction of Gina Torres and Derek Webster, the series will put the spotlight on new characters, Tommy and Charles, respectively. Fans of the ‘9-1-1’ franchise have a surprise coming their way as the third episode of season 2 will be a cross-over with the original ‘9-1-1’ as the two teams battle a massive wildfire.