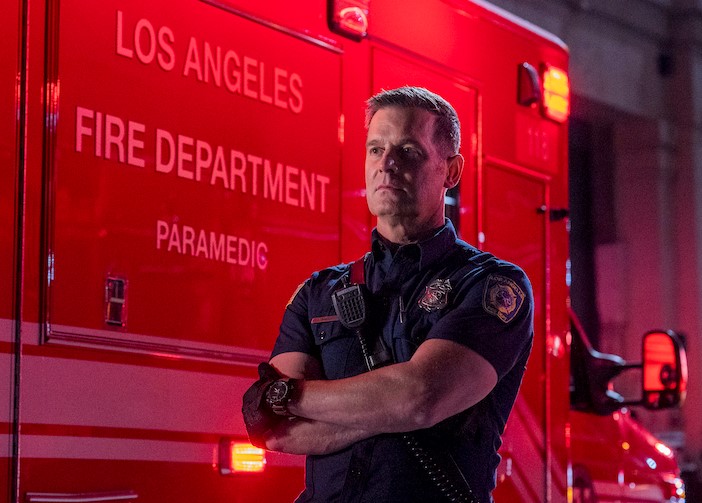 In the third episode of ‘9-1-1’ season 5, the blackout continues to spread its darkness as Michael and Athena pull every string they can to find their son. Jeffrey has kidnapped Harry, and the pair are nowhere to be found. However, they run into a woman who immediately senses that something is wrong and thus makes a video of the pair and posts it online. To read more on the episode, check out the recap. Now, here is all that you need to know about the fourth episode!

Cable users can watch ‘9-1-1’ season 5 episode 4 on Fox at the aforementioned date and time. You can also stream it on Fox’s official website or the Fox Now app. You can also stream the latest episodes of ‘9-1-1’ live on YouTube TV, SlingTV, Fubo TV, DirecTV, Hulu+Live TV, Xfinity, and Spectrum. Those who have a subscription to Hulu can watch the latest episodes here. Moreover, you can watch the upcoming episode by purchasing it on Amazon Prime Video, iTunes, Microsoft Store, or Vudu. If you want to catch up on the previous seasons, you can do so using Google Play.

In the fourth episode, titled ‘Home And Away,’ the 118 will get an emergency call regarding a truck accident in a high school homecoming parade. The previous episode has left a deep scar on Harry, which will be equally devastating for Michael and Athena as they try to help him cope with it. They might have to be patient with the kid because he isn’t ready to talk about his experiences as of now despite Michael’s affectionate behavior towards him.

Elsewhere, May will encounter an important figure from the history of the call center, which may leave her feeling intimidated. Bobby will try to comfort Chimney as he deals with Maddie’s deteriorating condition. Here’s a promo you can watch as you await the release of the upcoming episode!

In the third episode, titled ‘Desperate Measures,’ the city-wide blackout finally comes to an end. In the initial moments, we see how Jeffrey managed to abduct Harry to seek revenge from Athena. Even when he calls her just to provoke her, Jeffrey refuses to let Harry go. Therefore, the harrowed mother takes Michael on a manhunt for the vile kidnapper.

The scene takes an interesting turn when Harry runs into a woman during a pointless but determined attempt to escape. She records a video of Jeffrey subsequently dragging Harry to the vehicle and posts it online. Eventually, May eventually finds the video. Using existing clues and other resources, Athena finds Jeffrey but accidentally kills him. Harry is later found at a housing development and brought home. Although he is safe, he sits with Michael wearing a disturbed expression.

Elsewhere, Eddie drops the bomb on Ana during breakfast. He comes clean about his panic attacks and his inability to deal with their fast-moving relationship. Hence Ana has no choice but to leave after saying goodbye to Christopher. Maddie takes Jee-Yun to Chimney’s workplace but forgets to bring the child back with her. Chimney receives a recording of Maddie saying that she is incapable of caring for her child.