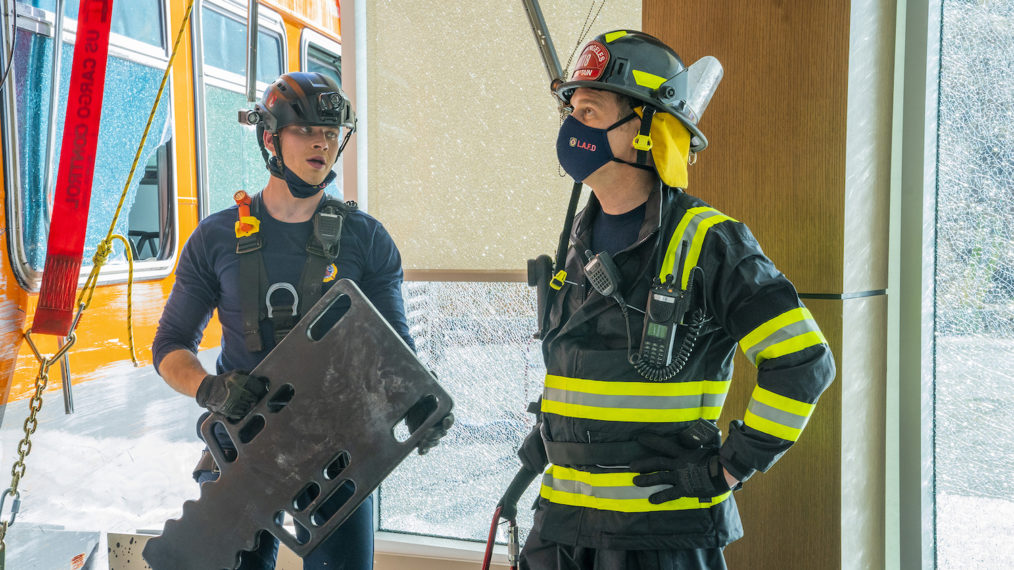 ‘9–1–1’ on Fox is a hit procedural series created by Brad Falchuk, Tim Minear, and Ryan Murphy. It revolves around the lives of first responders in Los Angeles, which comprise firefighters, paramedics, and police officers. The show enjoys a solid fanbase that loves the thrilling and adrenaline-pumping action sequences. The strong cast and the performances are guaranteed to hold one’s attention, although the series tips towards melodrama at times.

The award-winning action series has been criticized for a few inaccuracies in the medical emergencies the show depicts. The enthralling show first hit the screens on January 3, 2018, and has given us four entertaining seasons so far. If you are awaiting an update on the fifth season, we are happy to share with you everything we know!

If you are looking forward to the fifth season, we have good news. Fox announced the renewal of the show for season 5 on May 17, 2021, a week ahead of the season 4 finale. Taking into account that ‘9-1-1’ is one of the top scripted shows on the network, its renewal for another season was inevitable. Excluding the season finale, the fourth season had 6.5 million viewers tuning in on average, making it the most-watched scripted drama on Fox. Despite facing the challenges due to the Coronavirus pandemic, the first-responders drama series has sustained its impressive ratings.

🚨 Your official announcement that the BEST show on television will be returning for Season 5. 🚨 #911onFOX pic.twitter.com/hv8GG3zKME

It is important to note that Fox has not yet disclosed an official release date for the upcoming season. However, the network is determined to fall back into its usual release schedule, which is why the fifth season has been included in the Fall 2021-22 lineup by Fox. Therefore, fans can expect ‘9–1–1’ season 5 to release sometime in Fall 2021.

In the fourth season, we see the first-responders attending to several heart-stopping emergencies. However, they also have a lot going on in their personal lives. Hen and Karen give up their foster child in season 4, whereas Maddie and Chimney become new parents. Athena and Bobby learn to adjust to a new normal as May moves out. However, all is not well for the couple, as their marriage seems to have hit the rocks. The penultimate episode of the season also leaves everyone in shock as Eddie’s life hangs in the balance after being shot by a sniper.

In the fifth season, we will continue to see how Maddie and Chimney balance their work life and family life. Hen and Karen’s relationship might undergo some changes, and they might even consider fostering another child. We will also learn where Bobby and Athena stand vis-à-vis their relationship. Although May has chosen to live sober and independently, it might not be as easy as she thought. While all of this might be explored in season 5, we will also see the first-responders in Los Angeles serve the community to the best of their abilities. Additionally, the President of Entertainment at Fox, Michael Thorn, teased a crossover event with ‘9-1-1: Lone Star’ in season 5.