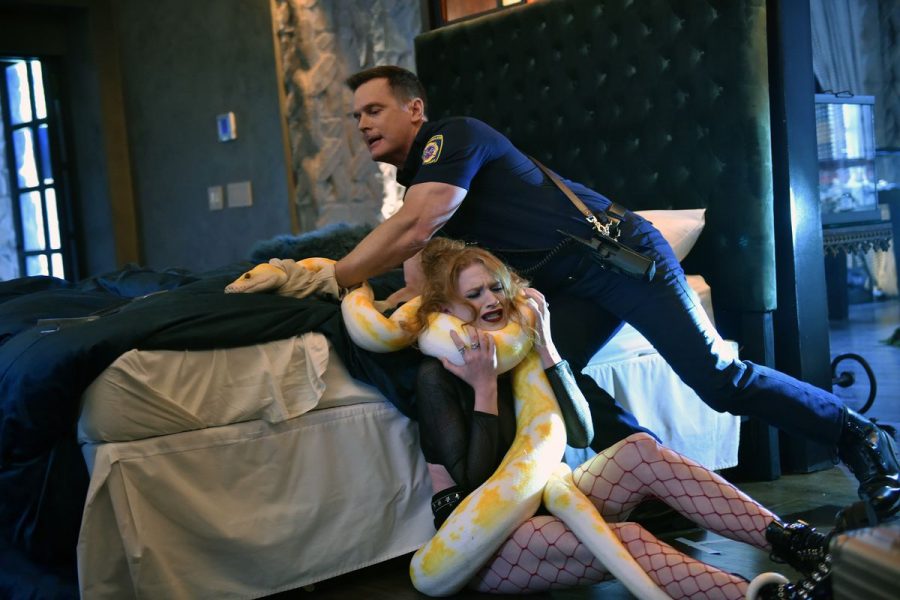 Emergency first responders often have to carry out their jobs at tremendous risk to themselves. Theirs is not a life of comfort and the intense work pressure often has adverse consequences for their personal lives. Ever wondered what that feels like? Well, ‘9-1-1’ is one show which explores the lives of first responders with quite some nuance.

Created by Ryan Murphy, Brad Falchuk, and Tim Minear, ‘9-1-1’ is an American procedural drama that follows the lives of some cops, paramedics, firefighters, and dispatchers in Los Angeles. A relatively new show which airs on Fox, Season 1 of ‘9-1-1’, comprising 10 episodes, premiered on January 3, 2018 and immediately struck a chord with critics and viewers alike. The Season 1 of the show has a rating of 70% on Rotten Tomatoes that summarizes all the critical response of the series as: “9-1-1 occasionally veers into melodrama, but is redeemed with a top-tier cast, adrenaline-pumping action, and a dash of trashy camp that pushes the show into addictive guilty pleasure territory.”

As far as the future of the show goes, fans should know that the show enjoys a brilliant rating of 2.6 among those in the 18-49 years demographic, and has a multi-platform viewership of over 10 million. Given this fact, Fox is unlikely to pull the plug on the show, and it would not be wrong to expect more seasons in future.

‘9-1-1’ boasts a great cast, and leading the pack is Angela Bassett as Los Angeles Police Department (LAPD) patrol sergeant Athena Grant. Peter Krause stars alongside her as Bobby Nash, the captain of the Los Angeles Fire Department (LAFD) Station 118. Other firefighters in the show include Oliver Stark as Evan “Buck” Buckley, while Aisha Hinds and Kenneth Choi play the roles of Henrietta “Hen” Wilson and Howard “Chimney” Han, respectively, who are firefighter/paramedics.

The aforementioned people make up the main cast of the show, and they are joined by a large number of actors and actresses in supporting roles or episodic roles. In Season 3, we expect most of the main cast members to make a comeback and reprise their roles.

‘9-1-1’ explores the lives of the aforementioned first responders who are thrust into some of the most frightening, shocking, and potentially life-ending situations. From minor accidents, to towering infernos, earthquakes, building collapses, and gun violence, the show throws unbearably tense situations at viewers in every episode, and it is an adrenaline-filled journey through the lives of the men and the women who devote their lives to protecting others.

These tense situations are interspersed with the difficulties that the protagonists have to endure in their personal lives, which range from abandonment issues, to friends losing their lives, and children trying to commit suicide. The lives of these first responders also often get intertwined with the lives of those who they aid, thereby giving the show and added dose of drama. Yet, the show is not all doom and gloom, and has several moments of genuine hilarity that lift the edge off its otherwise intense premise.

Further, the brilliant performances delivered by Bassett, Krause, Stark, and others endear them to the viewers, and you will inevitably find yourself involved in their lives and caring about their future. Overall, the show boasts compelling plotlines, a never-ending stream of emergencies, and solid performances, and is bound to draw you into its intense world. We expect more emergencies, more drama, and more laugh-out-loud moments in the upcoming season.

Understandably, its quality has not escaped the eyes of critics – ‘9-1-1’ enjoys a solid overall score of 85% on Rotten Tomatoes, with Season 2 having a perfect score of 100%. Viewers, too, have responded positively to the show, and it enjoys an overall rating of 7.6/10 on IMDb.

Here’s the trailer for 911 Season 3 to get you excited.