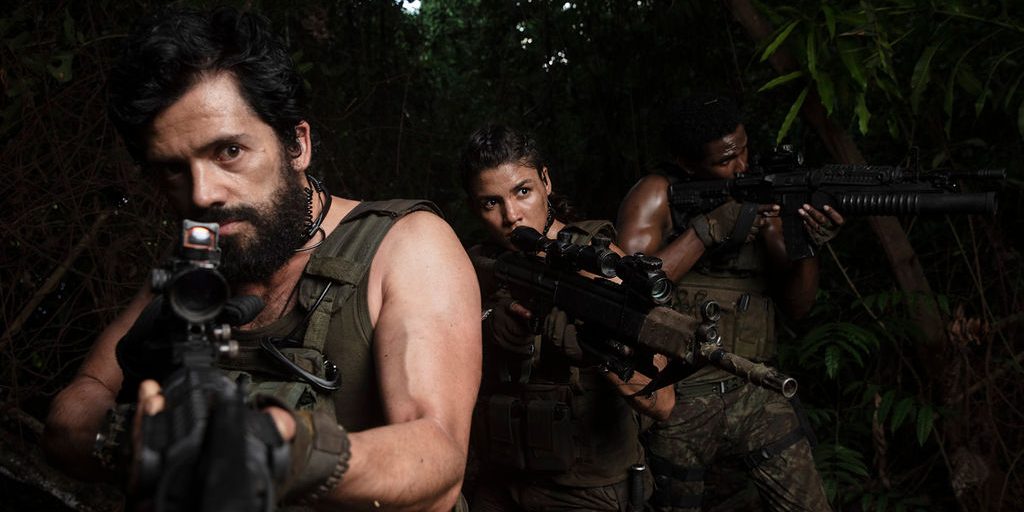 HBO Max’s horror thriller series ‘A Thousand Fangs’ (‘Mil Colmillos’) unveils a sinister mystery hidden deep beneath the dense jungles of Amazon. Created by Guillermo Escalona and Jaime Osorio Marquez, the series follows a skilled commando and his motley team in a mission of hair-raising tension. They have to penetrate into a militant community in the labyrinthine rainforest, eliminate the targets, and withdraw from their positions. The task seems reasonably easy until the soldiers face an invisible threat. The enemy always stays one step ahead, while the jungle turns into a dystopia when soldiers get mysteriously killed.

With the mission turning on its head, the commando team gasps for a way out of hell. Following its premiere, the show gained widespread popularity for the fresh treatment of the material and the ambiance of natural horror. Many also believed it to be seemingly inspired by Joseph Conrad’s ‘Heart of Darkness.’ However, as the first season has come to a close, you must be wondering about the prospects of a follow-up installment. If you are keen to know the release date and other developmental aspects of the sophomore season, let us probe into the matter.

‘A Thousand Fangs’ season 1 premiered in its entirety on December 9, 2021, on HBO Max. The first season packs seven episodes with runtimes ranging between 44 and 54 minutes per episode.

Let us now get into the development of the second season. Although HBO Max has not officially announced the renewal, there have been speculations that the series will get another season in the least. Other original shows by HBO Latin America such as ‘Sr. Ávila’ has been showered with accolades, including an Emmy. Therefore, the network has enough incentive to extend its first fictional foray into the Colombian landscape. A crew member shared a post on his Instagram account, the caption of which indicates that season 2 is already in production.

The above post features a few cast and crew members posing in front of a picturesque blue house, seemingly a pub. The caption translates to: “The direction and production staff in the filming of the second season of #MilColmillos.” Filming presumably commenced in November 2021. If production wraps up by early 2022, we can expect ‘A Thousand Fangs’ season 2 to premiere sometime in late 2022 or early 2023.

A Thousand Fangs Season 2 Cast: Who can be in it?

Almost all prominent cast members whose characters remain alive in the aftermath of the first season will possibly make a comeback. The series relies on a sprawling cast ensemble led by Claudio Cataño (of Colombian telenovela ‘La Viuda Negra’ fame) as Rojas, against Andres Londono of ‘Narcos: Mexico’ fame in the role of Castillo.

The series also stars Alejandro Buitrago (Diaz), Jaisson Jeack (Jackson), Andrea Olaya (Pardo), Hector Sánchez (Doc), Jarlin Javier Martinez (Barragán), Carolina Ribón (Flor) and others. Most of these members will hopefully reprise their roles in the follow-up installment. There may be some changes, which will be revealed in the course of the development.

A Thousand Fangs Season 2 Plot: What can it be About?

The first season of the horror series plunges the audiences into the heart of the Amazonian rainforest for a damning discovery. A group of commandos cut their way across the jungle to locate and eliminate an extremist demigod. The rumors are that the mysterious and charismatic personality is gathering an army in the middle of the forest.

As their path becomes narrower, they become outnumbered and hunted. In the process, they come to discover a spine-chilling secret hidden in the forest for 500 years. In the final moments of the inaugural season, Rojas and Castillo are held captive and taken to the revered pyramid, while the other commandos are trapped in their respective psychological hells.

The second season will possibly pick up the story from the explosive ending of season 1. We shall get further glimpses into the horrors of the jungle as light pores through the fabric of a bizarre reality. In the cliffhanger finale of the first season, the soldiers are afraid and hysterical as they seem feeble against the threat. We are yet to see whether or not the remaining soldiers make it out of the jungle alive. Moreover, there remains more to be revealed about the enigmatic personality in the epicenter of the drama. Rest assured, the second season will possibly be more atmospheric, sinister, and enthralling.

Read More: Is A Thousand Fangs Based on A True Story?