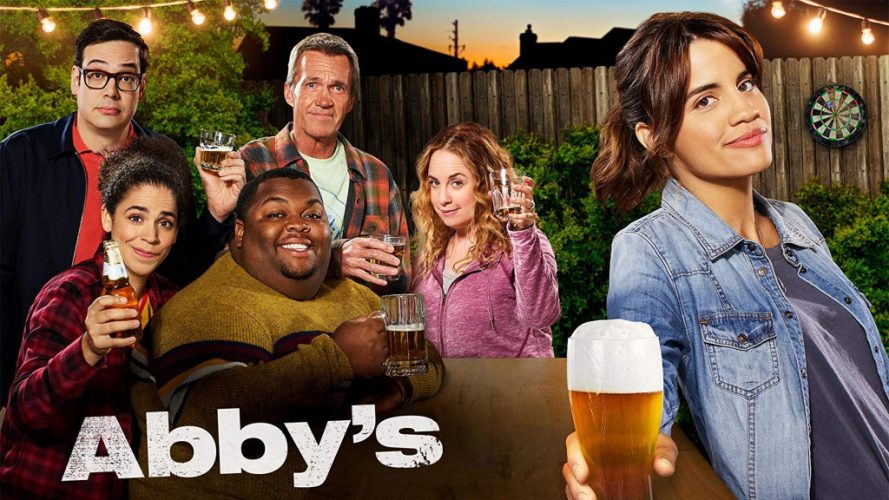 Abby’s is a comedy sitcom that airs on NBC and first premiered on March 28, 2019. The show is created by Josh Malmuth, who also serves as the executive producer along with Pamela Fryman, Michael Schur, and David Miner.

American actress Natalie Morales stars as the protagonist Abby. She has appeared in shows such as The Middleman and White Collar. Her notable movies include Wall Street: Money Never Sleeps and Going the Distance. Additionally, Morales has featured in The Grinder and Parks and Recreation.

Neil Flynn features as Fred. This American actor and comedian is recognized for his roles in TV series like Scrubs, The Middle, That ’70s Show, CSI, and Smallville. His notable films include Home Alone 3, Mean Girls, Indiana Jones and the Kingdom of the Crystal Skull and The Resurrection of Gavin Stone.

Nelson Franklin portrays the character of Bill. He is best known for featuring in The Millers, Traffic Light, The Office, New Girl, and Veep. American actress Jessica Chaffin — who enacts the character Beth —  is famous for her parts in Ronna and Beverly, The Heat, and  Man With A Plan. Leonard Ouzts features as James and Kimia Behpoornia stars as Rosie.

Abby’s Plot: What is it about?

The central plot of this sitcom revolves around Abby and her bar –Abby’s. She has created this unlicensed, makeshift establishment in her backyard and everyone is welcome here to spend some time away from the daily humdrum of their busy lives. However, to stick to its code, Abby’s has certain set rules — which includes no cell phones and no outside connections via social media. One has to face certain challenges to rise up on the hierarchy ladder and secure a seat at the bar. Failure to abide by the rules or losing challenges have their own repercussions.

To give a bit of background on Abby, she is an ex-military official who hosts both her friends and new members in her club. However, her sanctuary is invaded when the new landlord Bill — who has recently acquired the house from his dead aunt — suddenly appears and points out that this whole business is illegal. But once he starts mingling with the members of the club, he soon begins to like it and allows Abby to continue her venture if she follows certain norms.

Among the frequent visitors in the bar, there is Fred, who loves his beer and bits of conversation and Beth, who is a mom and comes to relax here for a while, away from her home. There is also Rosie, who knows all the 162 rules by heart and is proud about it, and James, the polite bouncer, who is scared of the slightest confrontation.

Abby’s, interestingly, is ABC’s second sitcom which features a bisexual female lead — after Eleanor Shellstrop on The Good Place. Another twist is that Abby’s is a multi-camera comedy — that for the first time is shot outdoors in front of a live audience.

In the words of Morales, “Abby worked at a lot of bars and she didn’t like people telling her what to do, so she decided to do her own thing. Eventually, people just started hanging out at her house and they’d pay her a few bucks for a drink. This turned into Abby making a bar in her backyard.”

Abby’s Season 2 Release Date: When will it premiere?

Abby’s season 1 premiered on NBC on March 28, 2019. The first installment of the show comprises a total of 10 episodes. The show seems to be fun and inspiring at the same time. A bar. A businesswoman. A tough landlord. It seems the right cocktail of successful tv show.

As far as the next season goes, we have bad news for the fans. On May 30, 2019, NBC announced the cancellation of the show. Considering the declining viewership of the show, it was expected that NBC may not continue for another season. Though, fans should not lose all their hopes. There’s still a possibility that some other network picks up the show. If that happens, we will update you about Abby’s season 2 release date.

You can check out the official trailer of the series below: