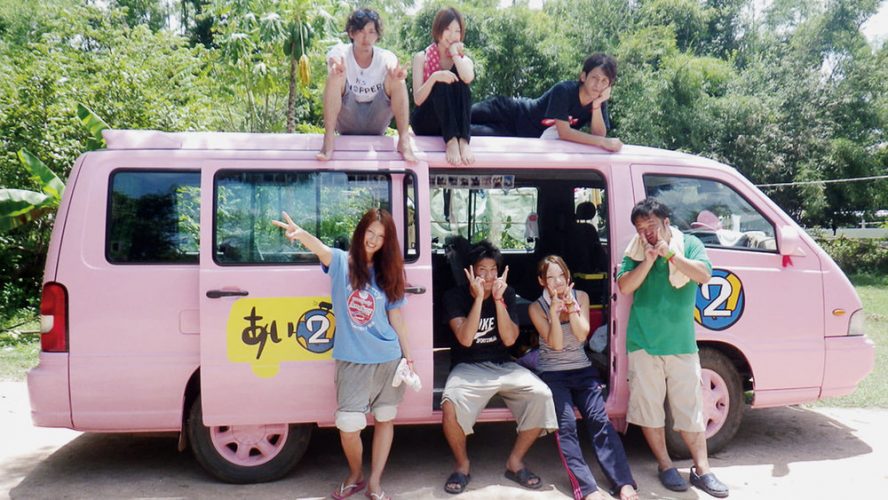 ‘Ainori Love Wagon: Asian Journey’ is a romance reality web series that centers around the lives of 7 people who are looking for true love. The first season premiered on October 26, 2017 on Netflix. The reality show revolves around seven young, single adults – three girls and four boys – who embark on a journey on a pink minibus across countries in Asia in a bid to find the love of their lives.

While Netflix’s version of the show is a rather recent one, it is an extension of the Japanese show ‘Ainori’, literally translating to “car pool” or “love ride”, which made its debut on Fuji TV in Japan on October 11, 1999. ‘Ainori’ had a brilliant run, and the original show ended on March 23, 2009. As of March 2009, the show had covered journeys through 90 countries, and 44 couples had found love through it – eight of them even ended up getting married.

Subsequently, the reality show made a return on December 25, 2010, under the name ‘Ainori 2’. Apart from Japan, the concept of the show under the ‘Ainori’ franchise has been reproduced in Vietnam too, and even there, the show has enjoyed tremendous success, becoming a highly rated television show for Ho Ch Minh City Television and Hanoi Television. Meanwhile, Netflix’s reboot of ‘Ainori’ under the name ‘Ainori Love Wagon: Asian Journey’ has got off to a good start. After Season 1 was received favorably, Netflix quickly announced the second season, which is currently airing.

Ainori Love Wagon: Asian Journey Cast: Who is in it?

Season 1 of the show starts off with four young, single men – Yuchan, Wedding, Hatomune, Taka – and three young, single women – Yumechin, Depparin, Asuka – as participants. As the show progress, some of these participants go home empty handed, while new ones join their place. Among men, the show later sees the likes of ShyBoy, Akira, Tom, and Shacho come in. Kasuga, Kanya, and Yuchan join the women later. Season 2 sees some of these same participants present, while new members like Isamuchan, Rya, AI, Sakurako and others join.

Ainori Love Wagon: Asian Journey Plot: What is it about?

In essence, ‘Ainori Love Wagon: Asian Journey’ is a dating-via-travel show wherein the participants enjoy shared experiences and try to find love among each other. The show, for them, ends when they fall in love. They have to confess their feelings to their intended, and if he/she accepts, the couple heads back to Japan together. If someone confesses and their intended rejects them, the one who has been rejected has to head back alone, and is replaced by another participant.

In Season 1, the “Love Wagon” travels across six countries, namely Vietnam, Myanmar, Taiwan, Thailand, Malaysia, and Singapore, and the participants, in their search for love, undertake myriad activities from fun, recreational ones to learning about the world and Japan’s place in it. It is perhaps here that ‘Ainori Love Wagon: Asian Journey’ stands out. Rather than being an out-and-out and drab romance reality show, the series puts a lot of stress on contemporary issues of relevance. For instance, Season 1 has episodes wherein the participants learn about history, culture, global warming and climate change, LGBTQ issues…the season also has long sections dedicated to discussing the importance of family and how to be happy in this late capitalist world.

While we cannot expect any news about Netflix’s plans anytime soon, there are some things to consider. The ‘Ainori’ franchise is a long-running one and has been an immense hit particularly among Asian audiences. Further, Netflix’s reboot of the franchise does appear like an effort to reboot it in the streaming era. Considering these two factors, it’s unlikely that Netflix will not renew the show for a third season. If we were to guess, we would say ‘Ainori Love Wagon: Asian Journey’ could also see a sixth season. That said, nothing can be confirmed till Netflix makes an announcement.

However, it remains to be seen when Netflix announces the renewal of the show. We will update this section with news on production and release dates when information about the same surfaces. So, do check back to stay in the loop.

While we wait for news on ‘Ainori Love Wagon: Asian Journey’, here’s the trailer of the show to give you a glimpse into what its all about. We will update this section with the trailer of Season 3 if and when Netflix releases the same.