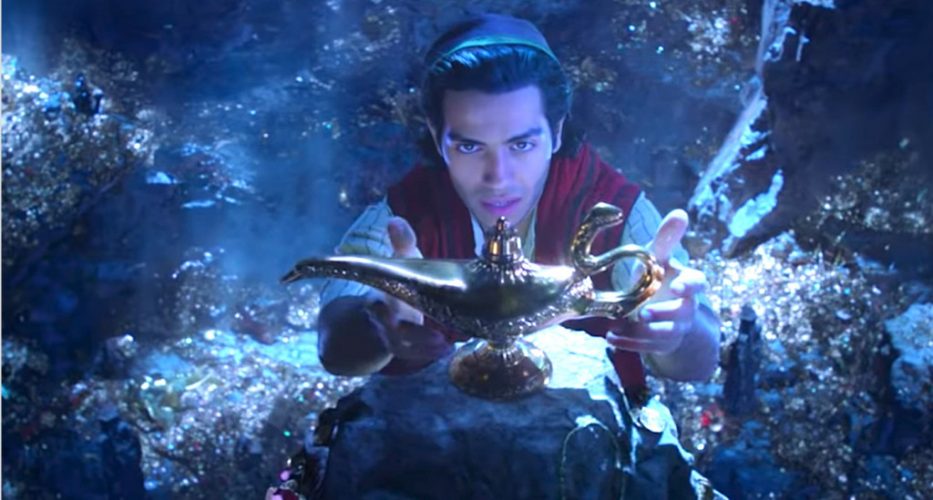 ‘Aladdin‘ has dropped its first official trailer and it is guaranteed to turn around the many misgivings fans might have originally harbored towards the Disney movie. With the film slated to release on May 24, 2019, there is just a little over two months to go and Disney has taken the opportunity to allow the trailer to show off the upcoming ‘Aladdin’.

Directed by Guy Ritchie and based on a script by John August, this movie borrows from the 1992 animated classic where Robin Williams played the role of the genie. While the trailer is no barometer for the entire film, what we do get to see is Ritchie’s unique take on how the film will play out. The trailer shows us Mena Massoud’s Aladdin on the streets attempting to escape the authorities. Ironically, his moves remind us a little of ‘Prince of Persia’. The trailer hints at the captivity of Naomi Scott’s character Jasmine and her eventual fierce assertion of freedom as she escapes with Aladdin in what will be a recreation of the iconic magic carpet sequence. However, the biggest revelation of the trailer has to be Will Smith‘s genie who will be doing a lot more than crossing his hands and granting wishes. What really struck us about the genie is how Smith is using humor and pointing out the grey areas that come with wishes in general, especially when Aladdin wants the genie to make him a prince. With scenes including ostrich riding and kind of playing wingman to Aladdin, Smith shows that his take on the genie will be vastly different from Williams portrayal and the trailer just might have won the grudging respect of even the harshest critics. The trailer also shows Marwan Kenzari as Jafar, as he schemes away and more importantly we get a look at his parrot Iago that transforms into a giant bird of prey.

The trailer follows the first look that the studios unveiled in October and followed it up with a teaser during the Grammys. Both of these previous looks were met with a mixture of disappointment and outrage. While Disney is best known for its visual effects, the first look had only shown us bits of rocks and deserts, highly unimpressive by Disney’s standards. When it came to the teaser, Will Smith’s blue genie drew the ire of a lot of fans despite the actor pleading to give the role a chance. It appears as though the trailer has managed to shut up the naysayers. However, the movie has a long way to go and has to shoulder an additional burden of representation.

To take a more nuanced look at the politics of representation in ‘Aladdin’, the story itself is an example of the European view of Asia. Born of multicultural influences in Hollywood, the original story’s first source was Antoine Galland, who included it in the 18th-century translation of ‘1001 Nights’ claiming that it was heard first hand from a Syrian storyteller. While the original ‘Aladdin’ was set in China, American and European storytellers gradually shifted this to the middle east and Hollywood played a huge role in this retelling. The original 1992 film shifted the city of Agrabah to somewhere along the Jordan river and brought in Indian influences by basing the Sultan’s palace on the Taj Mahal. However, the 1992 film was problematic insofar as it enforced Oriental stereotypes and the film reeked of exoticizing the Oriental Other. Agrabah is not only described explicitly as a ‘city of mystery’, something that the European gaze has always treated Eastern nations with, but also explicitly described the land as ‘barbaric’. The heroes in the tale were shamelessly Westernized, playing to the savior complex that the West has always felt. When ‘Aladdin’ releases it will not only have to bear the burden of historic misrepresentation but will also have to disprove the casting controversies that have plagued the film.

‘Aladdin’ releases at a time when the progressive fight for inclusivity and multiculturalism is facing a severe onslaught from extreme practitioners of conservative politics. Disney, being a powerhouse with immense outreach, has the opportunity to shape the perception of the Middle East for generations to come. Unfortunately, Ritchie is a director more known for his choppy street action than his cultural nuance. However, if the bazaars of Agrabah that we saw in the trailer is anything to go by, the director seems to have done justice to the film and the politics surrounding the representation. You can check out the trailer for yourself below.