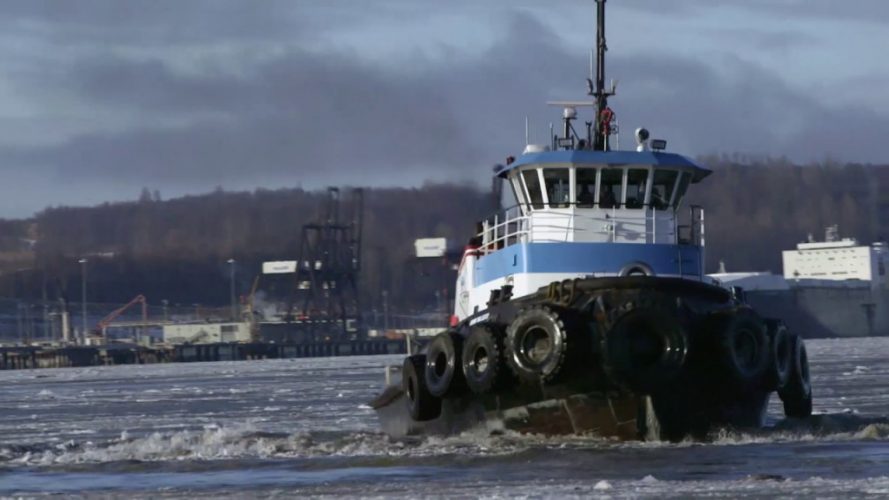 Alaska Mega Machines is an American documentary series which got released on 27th April 2016 on Science Channel. Season 2 premiered on 1st March 2018. You will find inspirational landscapes and beautiful ice mountains in Alaska. However, it also has rugged landscapes and remote locations which make living impossible here. But some people have to work in this state to make money. Surviving in such weather conditions becomes a task as well as a challenge.  For living in such a harsh environment, residents also need machines to keep the roads and water clear from the excessive ice.

The show centres around one of the biggest machines on earth in the state of Alaska. The show also tries to portray how these enormous machines are engineered. In this show, Michael Churton explores each and every corner of Alaska to discover the toughest machines and features on the show. He travels 20,000 miles from Dutch Harbor to Barrow to Sitka under the temperature of -40F to film stories of how the machines and the people are keeping Alaska sustainable during the brutal winters. He has also travelled to other cities like Fairbanks, Anchorage, Homer, Whittier, Anchorage, Deadhorse, Juneau, Kodiak, Clear, Akutan, and Delta. He has tapped numerous machines which include Tutusmena, Ferry, Port of Anchorage, Chinook Helicopter, Coast Guard Cutter Spar, Alaskan Railroad, Trident Fish Processing Plant, and mighty tugboats.

Alaska Mega Machines Season 3 Cast: Who is in it?

The main cast of this series is Michael Churton. The other cast for this show is not included. We will update this section soon when we have more information on this subject. Stay tuned for more updates.

Alaska Mega Machines Season 3 Plot: What is it about?

The show focuses on gigantic machines and equipment which thrives in extreme weather condition. In the first season, a strong North American ship is built to withstand tsunami size waves that run on highways. In the arctic circle, the fleet of machines has to battle against heavy floods. The machines also have to combat against the strong wind turbines in Alaska. Mighty tugboats chew through ice pieces on Alaska. During the coldest months, Yeti is a machine with 588 sharp teeth helping in running the American airport in the coldest months.

The engineering experts of Alaska build a huge dam in the isolated island of Sitka to provide power to the town. Below the surface of Alaska, explosive machinery produces big rewards 800 feet below. In a remote island, a mega fish factory produces 3 million pounds of seafood daily. In the wild parts of Alaska, a flying ambulance saves lives of people 14,000 feet above. The series also featured an episode where an airport was built from nothing but water and ice. In the next episode, sixteen missiles support the land to prevent nuclear disaster. In the second season, the series featured Ice beasts, Giants of the Bush, Ice Road Goliath and many such other unparalleled innovations.

Alaska Mega Machines Season 3 Release Date: When will it premiere?

The season 3 for Alaska Mega Machines is not renewed yet, so the air date has not been disclosed either. Season 2 concluded on March 15, 2018. One could hope for season 3 to be renewed in 2019. Stay tuned for further updates.

Alaska Mega Machines season 3 is not announced. For now, you can watch a short video on a machine that is the only one of its kind, The Yeti machine.