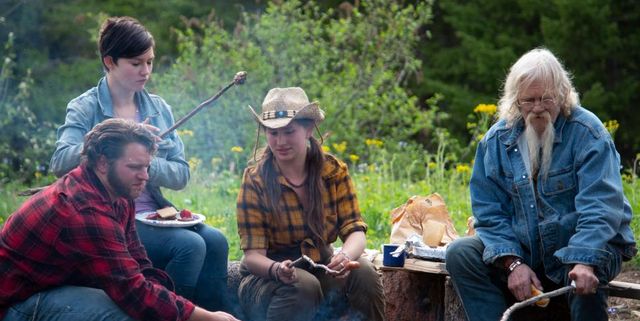 Growing up in the wild and surviving each day is no simple matter. However, you can trust the Brown family to do it day in and day out, with cameras rolling all around them. Regardless of the many controversies about the veracity of the show, ‘Alaskan Bush People‘ is wildly entertaining and keeps drawing viewers who want to see what outdoorsy living actually entails.

Now that the show is back for the eleventh season, we get to see their adventures unfold in the Pacific Northwest. The new season promises to offer completely new and unique challenges that the Brown family has to face. As we already know, the matriarch’s cancer treatment forced the family to leave their abode in Alaska, titled Browntown.

The family is now trying to set down new roots by making a self-sustaining village. The family is joined by the Brown children, who are all eager to establish themselves. The family is growing, meanwhile, with new members being welcomed, and the new season will try and show how the family dynamics get affected as a result. However, one thing is for certain. The family sticks together in all situations, which can be seen in the recent and upcoming episodes.

Episode 1 is off to a strong start in this regard, but before we recap, let us walk you through when and how to watch Episode 2 of ‘Alaskan Bush People’.

‘Alaskan Bush People’ Season 11 Episode 2 is slated to release on December 11, 2019, at 8 p.m. ET on the Discovery Channel. The episode has been titled “Bears of a Feather”. According to the official synopsis of the episode, we know that “When a hungry bear breaks into Noah’s tent and spooks the livestock, the Browns suspect it is being attracted by the ranch’s new arrivals, three young ostriches. Later, the windmill assembly takes the siblings to dangerous new heights.”

As is evident, we will be getting new episodes every Wednesday, at the same time.

‘Alaskan Bush People’ is a Discovery Channel show, so obviously you can watch it on television if you are subscribed to it. In the absence of a cable connection, you can still watch the live stream of the Discovery Channel, that is, Discovery Go if you pay for the services.

If you want to use one of the cable-free, live television streaming services, head over to PhiloTV, FuboTV, and SlingTV since they offer Discovery as part of their channel packs.

The first episode of ‘Alaskan Bush People’ has been aptly titled ‘Wind and Water’. This is because a lot of the episode centers around trying to get a windmill in place. Building one’s village in the wilderness is not easy but the Browns are determined to make their new Browntown better than before.

Primarily, we are given inklings of the ambitious plan that the family hits upon, to conquer the mountain and build their homestead. The action in the episode revolves around how Bear and the other siblings have to throw caution to the wind as they go about disassembling and then transporting a 50-foot windmill that they have salvaged. Obviously, as a source of power, the windmill is an important thing that needs to be set up, and the later episodes will definitely show more challenges surrounding it.