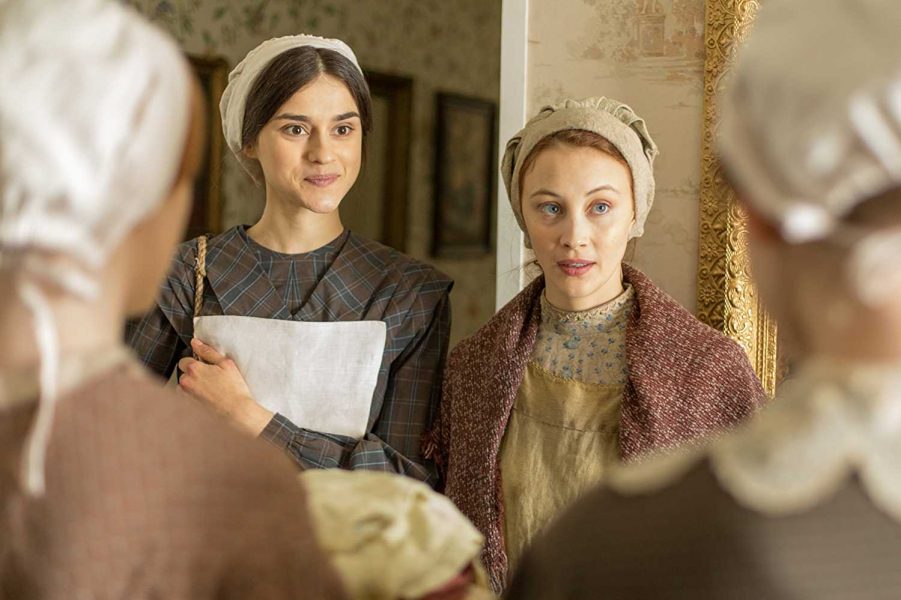 ‘Alias Grace’ is a Canadian drama television series that used to air on CBC Television and is available on Netflix worldwide. Written by Sarah Polley and directed by Mary Harron, the show is based on famed Canadian author Margaret Atwood’s award-winning 1996 historical fiction novel of the same name. As far the show goes, it is a pretty close adaptation of Atwood’s novel, and fictionalizes a notorious murder that took place in mid-19th century Canada. Notably, ‘Alias Grace’ marks the third television adaptation of an Atwood novel, with the previous two being ‘The Handmaid’s Tale’ and ‘Wandering Wenda’.

A relatively new show, the first two episodes of the show was aired at the 2017 Toronto International Festival, which was held between September 7 and September 17. Subsequently, the first season of ‘Alias Grace’, consisting of six episodes, premiered on CBC Television on September 25, 2017, and a couple of months later, on November 3, 2017, the entirety of the first season was released on Netflix. Upon release, ‘Alias Grace’ received outstanding reviews from television critics, while viewers too praised the quality of the show and the performances put in by the cast. It thus comes as no surprise that many are hoping for a second season of the critically-acclaimed show. Here’s everything we know about it thus far.

Alias Grace Cast: Who is in it?

Rebecca Liddiard, meanwhile, plays Grace’s old friend and mentor, Mary Whitney, who used to work as a serving girl with her, while Zachary Levi steps into the shoes of travelling magician and “neuro-hypnotist” Jeremiah the Peddler. Further, David Cronenberg plays Reverend Verrenger and Kerr Logan plays convicted murderer James McDermott. Finally, Paul Gross and Anna Paquin play Thomas Kinnear and Nancy Montgomery, around whose murders the plot of the show revolves. This wraps up the list of main cast members.

Additionally, the show also has several recurring cast members, some of whom include Martha Burns as Mrs. Parkinson, Will Bowes as George Parkinson, Sarah Manninen as Mrs. Humphrey, Stephen Joffe as Jamie Walsh, and Michael Therriault as Mr. McDonald. Interestingly, Margaret Atwood herself also appears in the show in a cameo, playing the role of an old woman at a church.

Read More in TV Preview: The Good Cop | The Haunting of Hill House

Alias Grace Plot: What is it about?

Like the novel, ‘Alias Grace’ fictionalizes the notorious murders of wealthy farmer Thomas Kinnear and his housekeeper Nancy Montgomery in 1843 in Canada West, for which two servants of the Kinnear household, Grace Marks and James McDermott, were blamed. Although both get convicted of the murder, Grace gets a life imprisonment sentence while McDermott is hanged to death.

With this background, the events in the show take place years after Grace’s imprisonment, at a time when Grace has been hired out of prison to serve as a domestic servant in the home of the Governor of the penitentiary. Owing to Grace’s model behavior while in prison, several members of the Methodist church try to get her pardoned and released. For this purpose, psychiatrist Dr. Simon Jordan is assigned to evaluate Grace, to determine whether she suffers from some sort of hysteric ailment or whether she conscientiously murdered Thomas Kinnear and his housekeeper, Nancy Montgomery.

Having no memory of what happened on the night of the murders, Grace starts narrating the events of her life to Dr. Jordan. With each session, Dr. Jordan starts getting a glimpse into Grace’s past, right from when her family immigrated from Ireland to Canada, to incidents involving Grace’s alcoholic and abusive father. He learns when Grace left home to find work, and what it meant for her. Dr. Jordan also learns about Grace’s friendship with another maid, Mary Whitney, who later died from complications arising out of her pregnancy, despite Grace’s attempts to save her. As Grace reveals more and more about her life, Dr. Jordan starts developing romantic feelings for her. Yet, at the same time, he inches closer to the truth about what went down on the night of Kinnear and Montgomery’s murders, and the end of the show focuses on this “truth”, Dr. Jordan’s evaluation of Grace, and Grace’s ultimate fate (we’re not giving away any spoilers).

The plot of the show, undoubtedly, is pretty interesting, but what is perhaps more interesting is the number of issues it touches upon. As Grace narrates her life story to Dr. Jordan, the show touches upon important and relevant themes of class, gender, identity, mental health issues, and corruption, providing viewers with insightful social commentary.

Thus, it is not surprising that ‘Alias Grace’ enjoys a place of respect among critics – the show has a brilliant score of 99% on Rotten Tomatoes, with the critics consensus reading, “Biting social commentary and Sarah Gadon’s hypnotic performance make Alias Grace a worthy addition to the Margaret Atwood adaptation catalog.” Viewers, too, have largely praised the show, and it enjoys a good rating of 7.6/10 on IMDb, based on over 18,000 votes.

Season 1 of ‘Alias Grace’, consisting of six episodes, premiered on CBC Television on September 25, 2017. Given the quality of the show, its social commentary, and the brilliant performances by cast members, it is perhaps not surprising that many were hopeful about seeing another season.

Unfortunately, the possibility of Alias Grace Season 2 is quite unlikely as the show was produced as a six-part limited series based on the novel. Having said that, popular shows like Alias Grace often are brought to life by writing fresh stories independent of its original source. So, its renewal chances are slim, we won’t be surprised if Netflix brings back the show sometime in 2020 or 2021.

While we wait for any news on season 2, check out the season 1 trailer to refresh your memories. You can catch all the episodes of season 1 on Netflix.