All or Nothing: The Dallas Cowboys Season 3: Premiere Date, Cast, Recap, Update 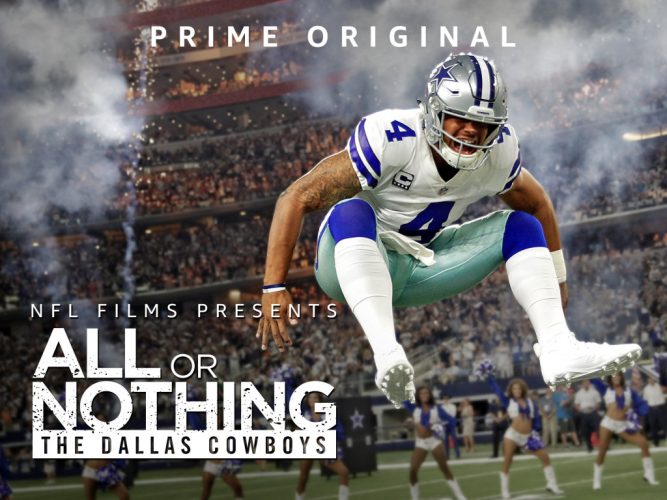 All or Nothing: The Dallas Cowboys is a new American documentary mini TV Series directed by Shannon Furman, Steve Trout, Jay Jackson, and Terrell Riley. This sports documentary series centres around the rowdy campaign of 2017. This series also features every game they play in every season. In the previous seasons, they participated in various Super Bowl aspirations and later on, exited the one game short of the playoffs after some controversies rose. IMDb gave it a 7.8 rating out of 10 in the previous seasons. Starring Jerry Jones, Dak Prescott, and Jason Garrett, season 1 takes fans inside the locker of the players. The series also featured the sidelines and off the field for an extraordinary look inside the team of NFL. In season 3, the series follows around the Dallas Cowboys. Last year was not the best year for the team. Their team had to face horrible defeats in the game, but this year, they are all prepared to defeat their rivals football teams.

All or Nothing: The Dallas Cowboys Cast: Who is in it?

All or Nothing: The Dallas Cowboys Plot: What is it about?

In the third season, the Cowboy season starts with a bang. All the teams are well prepared for the matches. The Dallas Cowboys are looking forward to winning in this season. Last year was not one of their greatest because they had to deal with national anthem protests, not making the playoffs, Ezekiel Elliott’s suspension and much more. They have their first match in Denver, but due to unexpected circumstances, they are badly defeated by their rivals. Later on, they have to make crucial decisions in this season as their longtime opponents come to town. In the next episode, the Dallas Cowboys kick the butts of their opponents.

In Dallas, Tony Romo returns home for his first broadcasting season in the Cowboys game. The game doesn’t go according to the plan for Dallas when a team member Ezekiel Elliott is suspended, and many players face several injuries. The Dallas Cowboys are losing their grip in the game, but still, they have made a firm decision to stand together in their traditional holiday home game. In the next episode, the Cowboys and Dak Prescott get caught up into a fight. The team also tries to keep their game positive and enthusiastic when the game starts in the fall. In the last episode, Ezekiel Elliott returns after his suspension has lifted. The teams start planning for their big game. They gear themselves up for the final battle in the playoffs against their rivals.

All or Nothing: The Dallas Cowboys Release Date: When will it premiere?

We can’t yet pin an air date on All or Nothing: The Dallas Cowboys season 4 for obvious reasons. Fans of Dallas Cowboys will be rooting for their team same as ever, and we will expect the show to be back soon. Till then stay tuned!