When Will ‘Altered Carbon’ be Back on Netflix?

Based on Richard K. Morgan’s book of the same name, ‘Altered Carbon’ is a sci-fi drama set 360 years into the future. It follows the story of a man named Takeshi Kovacs, who had been a part of a rebel group. The story is adapted for the screen by Laeta Kalogridis, who also served as the showrunner for the first season. For the second season, Alison Schapker has taken over the mantle, as the story enters a different phase. The first season was received well, which has increased the anticipation around the second season. Let’s find out more about it. 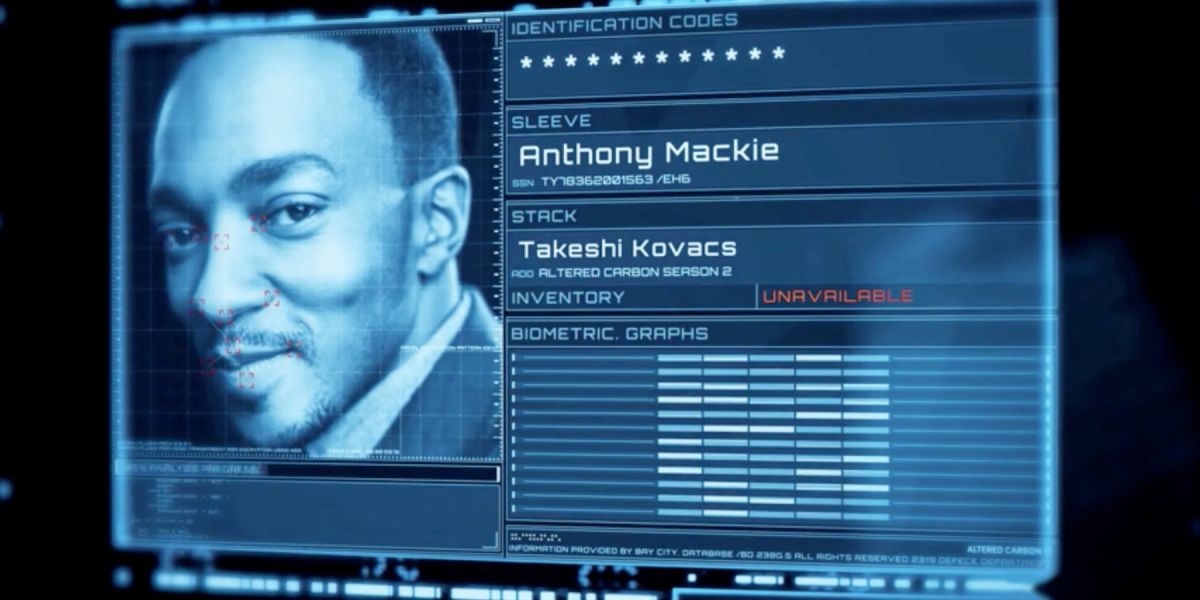 The story of ‘Altered Carbon’ revolves around the ability of people to switch bodies which keeps them alive for a long time. The protagonist is a man named Takeshi Kovacs. In the first season, Joel Kinnaman plays the lead role.

In the second season, Anthony Mackie, takes over the mantle from him. The new cast also includes Simone Missick as Trepp, Dina Shihabi as Dig 301, Torben Liebrecht as Colonel Ivan Carrera, James Saito as Tanaseda Hideki and Lela Loren as Danica Harlan. Reprising their roles from the first season are Chris Conner as an AI Edgar Poe, and Reneé Elise Goldsberry as Quellcrist Falconer. Will Yun Lee, who played the original Kovacs in the first season, is also expected to reprise his role, even if in flashbacks.

The first season of ‘Altered Carbon’ ends with the resolution of the mystery that Takeshi Kovacs had been tasked to uncover. It also gives him the hope of reuniting with his lost love. In the second season, we find him closer to locating her. Originally, it was expected that the series would follow the order of the novels and the second season would be based on ‘Broken Angels’.

However, the show has diverged from the storyline of the books, which also makes sense, considering the extent to which everything expands in the second book. Bringing all of that drama and detail on the screen would have been extremely difficult if not impossible.

Taking a turn of its own, the second season has Kovacs in a new sleeve, returning to his home planet, Harlan’s World. Once again, he finds himself in pursuit of a murderer. To his utter disbelief, he discovers that the closer he gets to finding out the person behind the brutal murders, the closer he is to finding Quell. He has been hoping to reunite with her for a long time, but a lot of time has passed since he last saw her. In the end, the Quell he finds might not be the one he was looking for.

Altered Carbon Season 2 Release Date: When will it premiere?

‘Altered Carbon’ Season 2 is set to release on February 27, 2020 at 12:01 am PT on Netflix. The first season had been planned as a standalone. However, considering the success of the series as well as the potential of exploring the storyline, Netflix decided to give it another go. The creator of the show, Laeta Kalogridis said, “We want to do something surprising with the second season that is not in the same place with the same people. I think the universe of these books gives you more latitude… Richard [K. Morgan] and I have a plan, I don’t know how people will feel about the plan, but we do have one!”

Speaking of the plan, we expect ‘Altered Carbon’ to stick around for a long time. Some time ago, Morgan had expressed the plan to create four additional seasons. This means that there is still a possibility for the show to turn back to the books. Netflix has not renewed the series for a third season yet, but if they are in sync with Morgan, then there is a renewal announcement on the horizon.

Considering the time it took to make the second season, the third season is expected to drop sometime in 2022. The showrunners not only have to create a new arc for the characters, but if they stick to the formula of changing the lead with every season, they will also be on the lookout for a new cast. All of this can easily take 2 years. When we receive more information about it, we will update this section.

Netflix hasn’t yet released a trailer for ‘Altered Carbon’ Season 2, but they did release a teaser, announcing the new cast. Have a look at it here: