The ’90s was a magnificent decade for world cinema. The romcoms reigned the box office. Critics and viewers fell in love with the same movies. And most importantly, people enjoyed the habit of ‘going to the movies’. Here is the list of really good 90s movies on Amazon Prime that are available to stream right now: 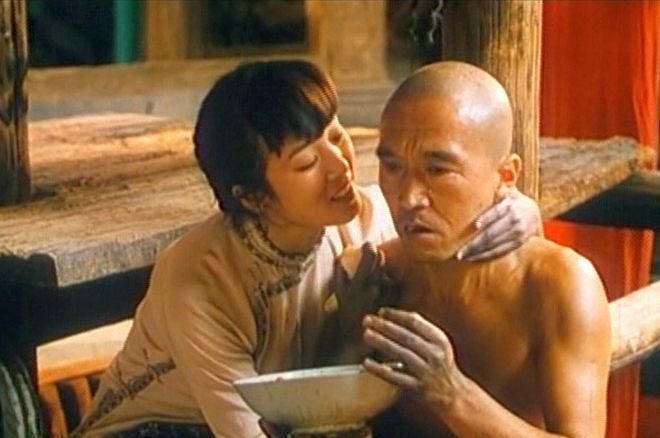 ‘Ju Dou’ is a Chinese drama which follows the desperate life of a Chinese woman, Ju Dou. Married to the ruthless and impotent owner of a dye mill in a remote Chinese village, she conceives a boy with her husband’s nephew. But she does not reveal the truth behind the boy’s birth as it might land the mother and son in trouble. So, she raises her boy as the mill owner husband’s legitimate son. But hiding the truth for a long time is nearly impossible as the old mill owner is very keen about his infertility and his craving for a legitimate heir to hand over his wealth. The movie culminates in an inevitable tragic end of the boy’s parental masquerade. Directed by Zhang Yimou and Yang Fengliang, ‘Ju Dou’ is the first Chinese film to be nominated for an Academy Award for Best Foreign Language Film. 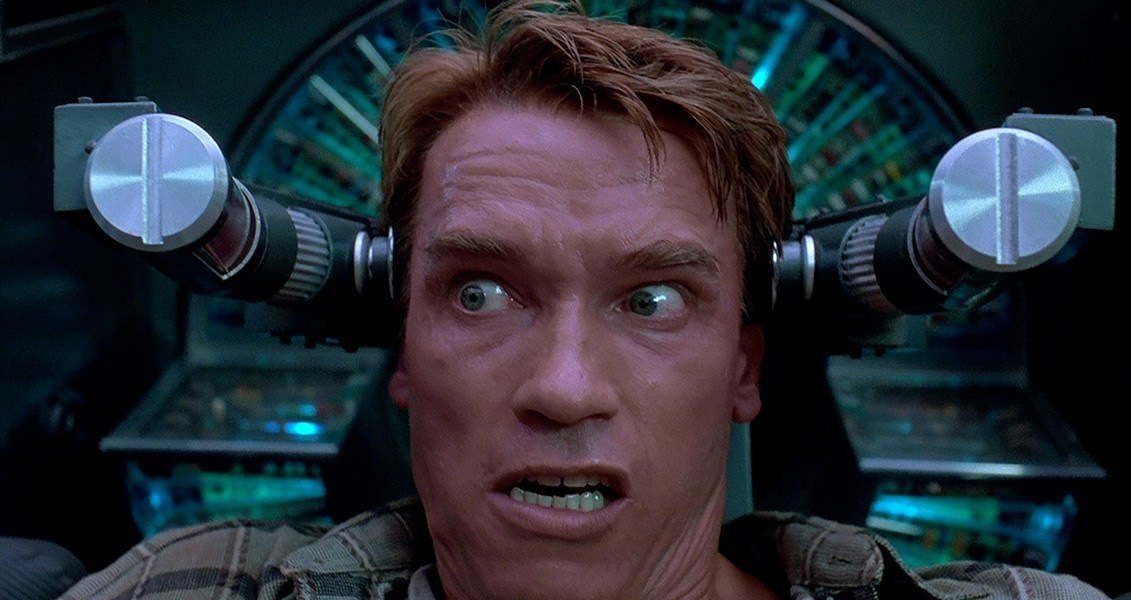 ‘Total Recall’ tells the story of Douglas Quaid who is haunted by a recurring dream about a space journey. In an attempt to escape the dream, Quaid seeks help from Rekall Inc., a firm known as the leaders in memory implantation technology. But memories of a secret mission to Mars rush to his mind after the implantation session. Soon, he discovers a mysterious object in his brain which causes recurring dreams and illusions. He embarks on a journey to Mars to find the secrets behind his weird dream about the red planet. Douglas Quaid, who is a construction worker in the present life, finds out that he was a secret agent named Carl Hauser in the past and his memory was erased by some anonymous people to cover up a conspiracy. But Quaid finds himself at the core of a deadly scheme for triggering an interplanetary war. Directed by Paul Verhoeven, ‘Total Recall’ features Arnold Schwarzenegger, Rachel Ticotin, Sharon Stone, Ronny Cox, and Michael Ironside in the lead roles.

‘Thelma & Louise’ is a road movie that revolves around its titular characters, who are best friends. The two high-spirited girls hit the road for adventure but the trip ends up in a cat-and-mouse game with the police. The carefree weekend getaway soon becomes a nightmare when Louise shoots a rapist who tries to assault Thelma. Soon, the girls find themselves as two criminals on the run. Their only hope is the faraway Mexican border. With the policemen on their tail, Thelma and Louise speed up through Arkansas and the Grand Canyon. ‘Thelma & Louise’ ends with a touching and unexpected climax. Geena Davis and Susan Sarandon play the titular lead pair in the movie. 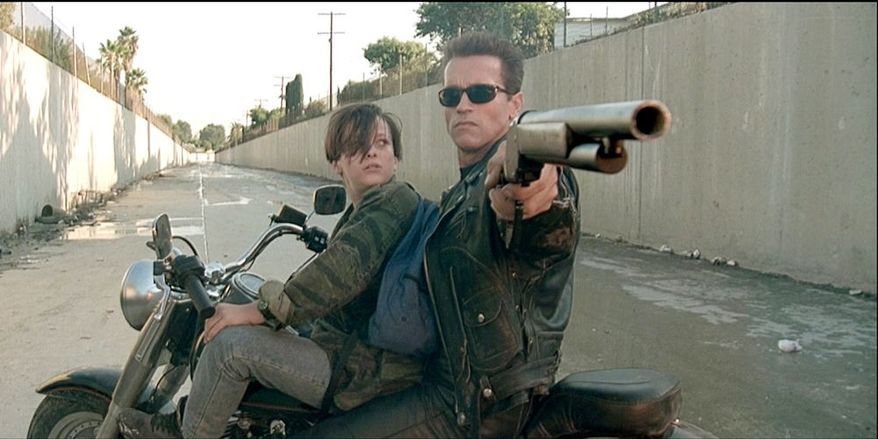 ‘Terminator 2: Judgment Day’ is a sequel to the 1984 film ‘The Terminator. The movie follows Sarah Connor who returns as the mother of the 10-year-old John. From the year 2029, the defeated machines send an advanced Terminator, the shape-shifting T-1000, to hunt down and eliminate John. The mission aims to prevent John from organizing the human resistance which would lead to the fall of the machines in the future. But sensing the danger, John also sends the less advanced Terminator back in time to protect his childhood version. 10 years have passed since the events in the first movie and the T-1000 clashes with T-800. ‘Terminator 2: Judgement Day‘ is directed by James Cameron from a script he co-wrote with William Wisher. The movie stars Arnold Schwarzenegger, Linda Hamilton, Robert Patrick, and Edward Furlong in major roles. 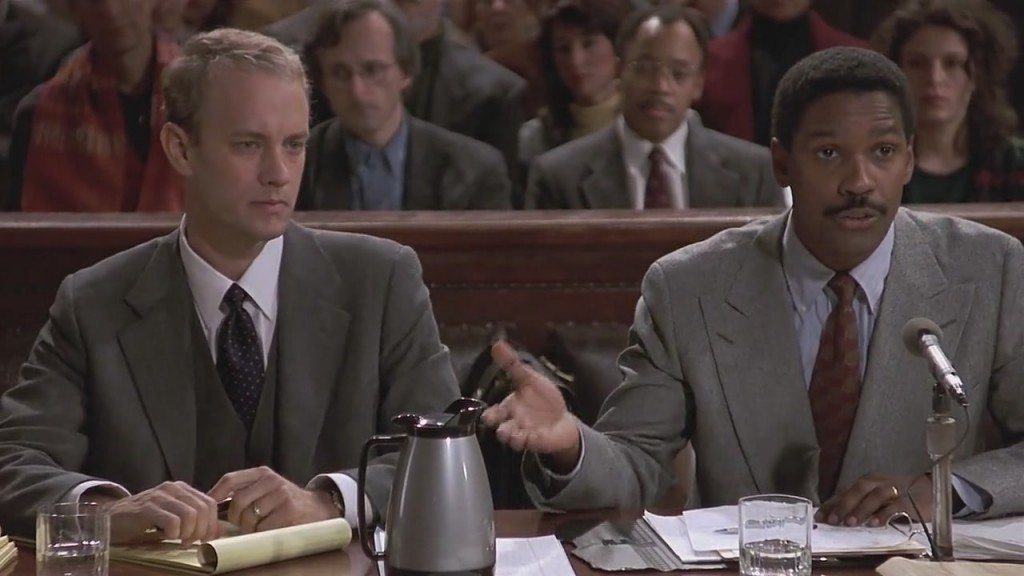 ‘Philadelphia’ is a legal drama set in the backdrop of a homophobic law firm in Philadelphia. The plot follows two lawyers in the firm who compete with each other. One of the promising lawyers, Andrew Beckett has a secret to hide from his colleagues. Due to career concerns, Beckett keeps his homosexuality and HIV status as a top secret. But other lawyers find his fears and secrets and Beckett is fired from the organization. He decides to fight back the discrimination and injustice and teams up with his competitor Joe Miller, who is the only lawyer to stand by his side. In the legal battle that follows, both the lawyers develop an unlikely friendship and they expose the prejudice and corruption prevailing in the system. Directed by Jonathan Demme, ‘Philadelphia’ stars Tom Hanks and Denzel Washington in the lead roles. The movie earned Hanks the Academy Award for Best Actor for his portrayal of Andrew Beckett.

‘The Shawshank Redemption’ is based on the 1982 novella ‘Rita Hayworth and Shawshank Redemption’ by Stephen King. The movie follows the banker-turned convict Andy Dufresne and fellow inmate and smuggler Ellis ‘Red’ Redding. Andy is charged with the double murder of his wife and her lover. His knowledge in banking and accounting helps him get close to the corrupt jail warden at the Shawshank prison. Over the years of his sentence, Andy earns the goodwill and friendship of the other inmates and jail staff. But he has other plans hidden behind his pleasing composure. ‘The Shawshank Redemption‘ is directed by Frank Darabont and it stars Tim Robbins, Morgan Freeman and Bob Gunton in major roles. 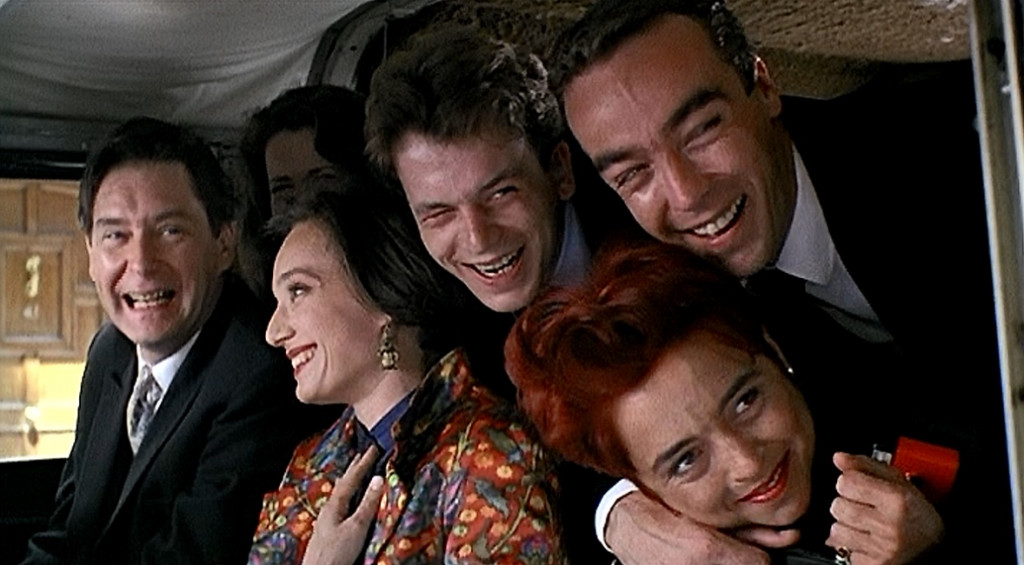 ‘Four Weddings and a Funeral’ is a romantic comedy that features a British man named Charles and his love interest, Carrie. Charles and his friends never believe that they will find the love of their life. But he meets up with Carrie, an American woman, and falls head over heels in love with her. But Carrie never accepts his love and the couple goes through an ordeal of four weddings and a funeral before realizing they are made for each other. 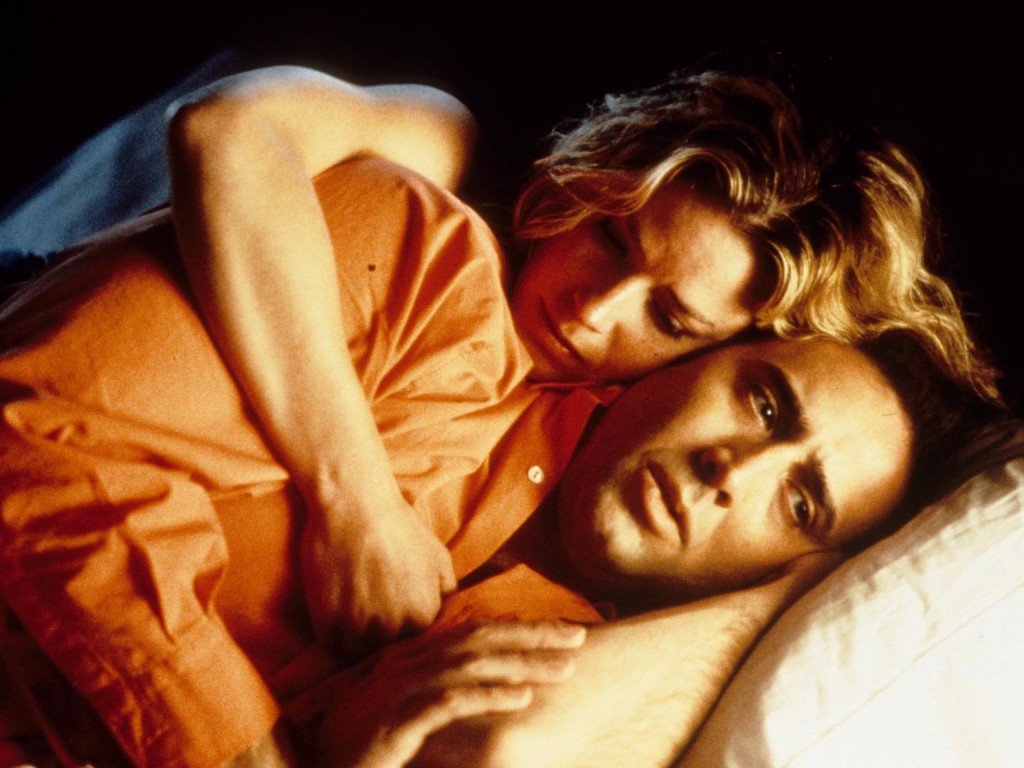 ‘Leaving Las Vegas’ tells the story of a suicidal alcoholic, Ben Sanderson. He is a screenwriter in Hollywood. Ben’s wife recently left him and she took their son with her. Ben becomes so lonely and depressed that he decides to commit suicide. He moves to Las Vegas to drink himself to death. But a chance encounter with Sera, a prostitute, turns the course of his suicidal life. Ben establishes a reluctant friendship and a pact with Sera. The couple move in together and start a new life, but not without problems. After a painful breakup and an emotional reunion, their story ends in an inevitable tragedy. ‘Leaving Las Vegas’ is directed by Mike Figgis based on a novel by John O’Brien. The movie features Nicolas Cage and Elisabeth Shue as the lead pair. Cage won the Golden Globe Award for Best Actor – Motion Picture Drama and the Academy Award for Best Actor for his portrayal of Ben.

‘GoldenEye’ marks Pierce Brosnan’s iconic debut as the superspy James Bond, 007. The movie also brings in new cast members like Judi Dench as the first woman to play M and Caroline Bliss as Miss Moneypenny into the franchise. ‘Goldeneye’ is the first Bond movie made after the dissolution of USSR and the plot unfolds in the backdrop of the collapse of the Soviet block. Agent 007 is on a mission to expose the mysterious head of the Janus Syndicate in ‘Goldeneye.’ He faces an ex-MI6 agent and defector who possesses Goldeneye, the lethal satellite weapon designed by the Soviet Union during the Cold War. The ex-MI6 man plans to cause a global economic crisis with the attacks to settle his old scores with Britain and MI6. Pierce Brosnan pairs up with the new Russian Bond girl Natalya Simonova. Sean Bean plays the deadly villain, Alec Trevelyan. 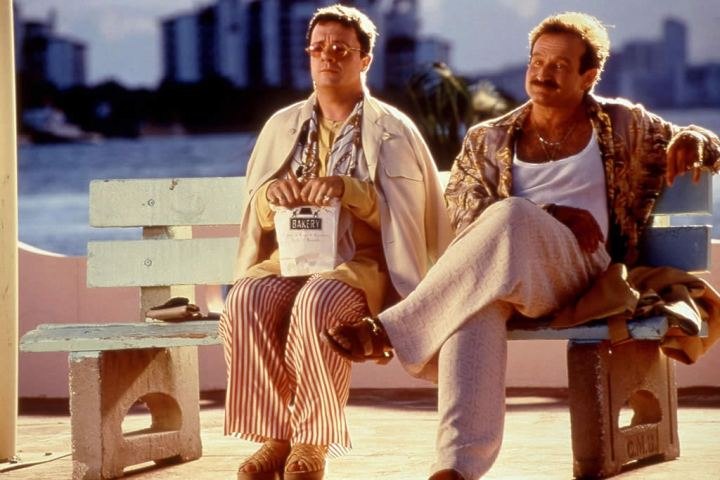 ‘The Birdcage’ is a comedic take on the 1978 Franco-Italian production ‘La Cage aux Folles.’ The plot revolves around an openly gay cabaret owner Armand Goldman and his partner Albert, the real person behind club heartthrob Starina. They live in an apartment above the drag club known as ‘The Birdcage.’ Armand has a son who wants to marry Barbara, the daughter of ultra-conservative Republican Senator Kevin Keeley. Armand and his partner agree to play a drama in front of Barbara’s right-wing moralist parents. The Senator and his family come to The Birdcage to meet ‘the parents’ of their daughter’s lover. ‘The Birdcage’ is directed by Mike Nichols and it stars Robin Williams, Gene Hackman, Nathan Lane, and Dianne Wiest. 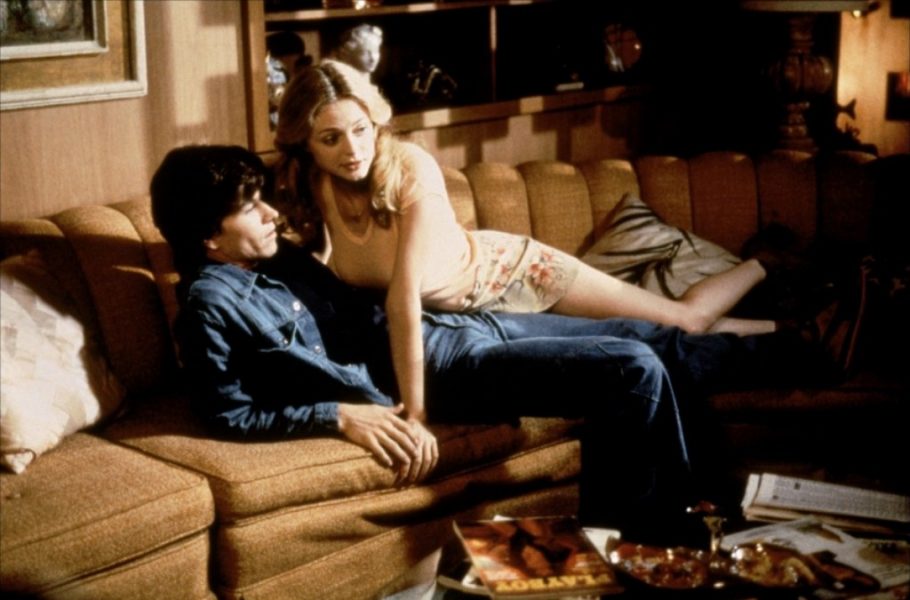 ‘The Sweet Hereafter’ centers on a tragic bus accident that splits a small community into pieces. The incident kills most of the kids in the town. A lawyer then lands in town to help the parents launch a suit. The townspeople prepare a class action suit against someone they can blame, only to multiply their grief and anger. One young girl, who’s been living in a wheelchair after the accident, comes forward to guide the entire small town. She opes the eyes of the lawyer with her little wisdom and courage. Atom Egoyan directs the movie based on the novel of the same name by Russell Banks. Ian Holm, Sarah Polley and Bruce Greenwood play the key roles. 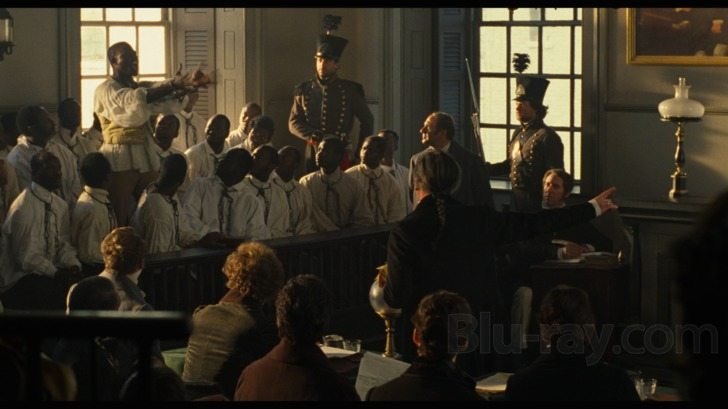 ‘Amistad’ tells the heart-wrenching true story of the slave ship La Amistad. In 1839, abducted Mende tribesman take control of the ship after a mutiny. La Amistad is on its way to the northeastern coast of America, the nerve center of the slave trade from the Cuban coast. They kill the crew and continue to sail towards Africa. But they are lost in the sea and reach the American coast. Almost all the rebels are arrested and imprisoned. When their cases come to the supreme court, the legendary John Quincy Adams appears to defend him, and the rest is history. 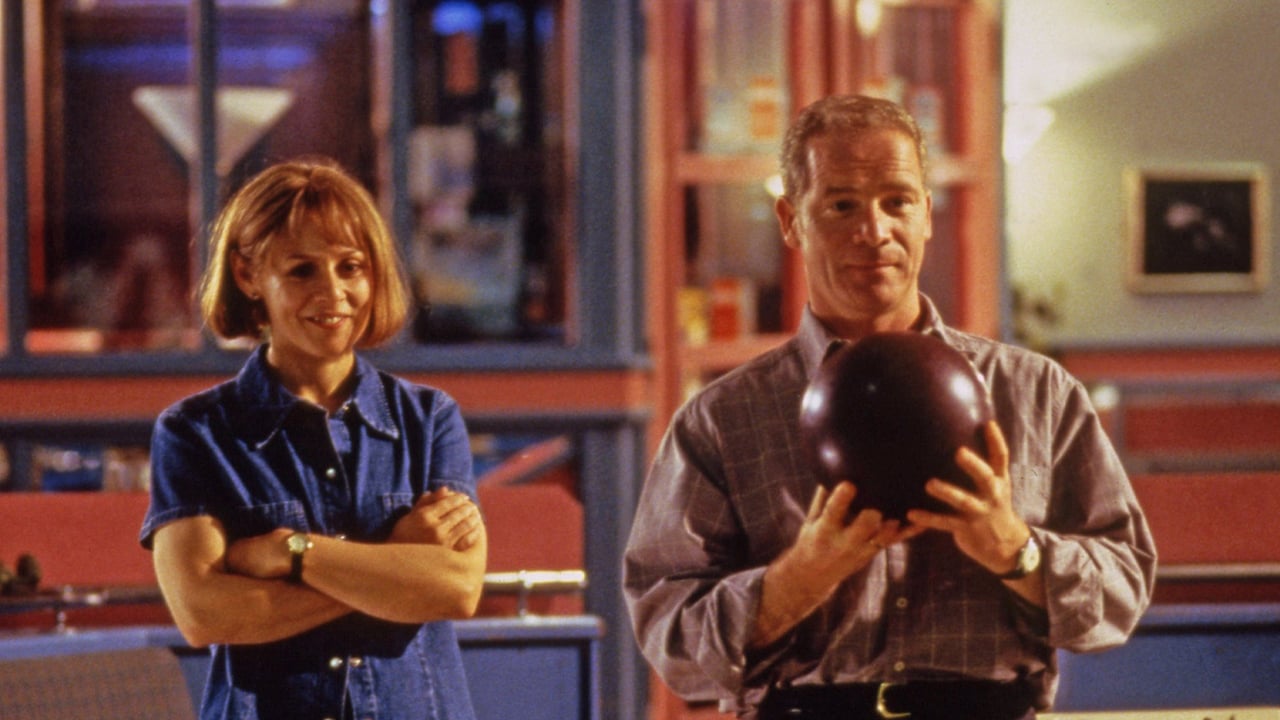 ‘My Name is Joe’ is set in one of the most dangerous neighborhoods in Glasgow. Most of the inhabitants in the area have a criminal and drug background. Joe Kavanagh is an unemployed young man recovering from alcohol addiction. He serves as the coach of Scotland’s below average football team. He meets Sarah, a dedicated social worker, and they fall for each other. But life is not as easy as they imagined. One of Joe’s friends, Liam, brings in more crime and gore into the family and their life reaches a dead end. The movie is directed by Ken Loach. Peter Mullan, Louise Goodall and David McKay play the lead roles in the film. Mullan won the Best Actor prize at the 1998 Cannes Film Festival for his portrayal of Joe. 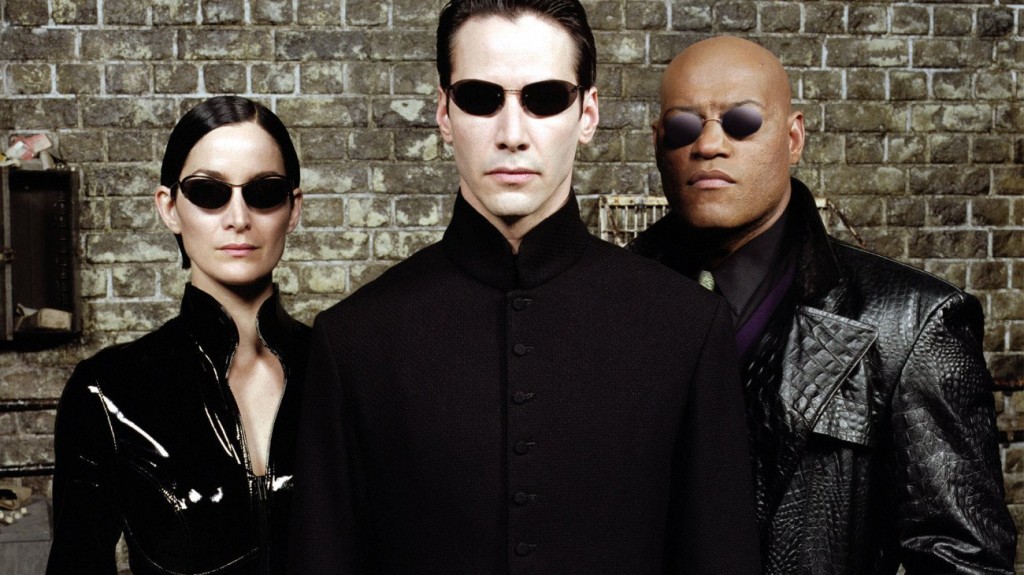 ‘The Matrix’ is set in the 22nd century and the world is controlled by self-improvising algorithms. The plot follows Thomas A. Anderson, who is an ordinary computer programmer by the day and a hacker, Neo, by the night. His mundane life turns upside down when the legendary computer hacker and most wanted rebel leader Morpheus pays a visit to his den. The visit places Neo under the scanner of the police. He then escapes to the real world which is a wasteland ruled by an advanced version of intelligent machines. They extract heat from human bodies and possess the control of human minds with the help of artificial reality called the Matrix. Neo joins a group of underground rebels fighting against the Matrix. A human rebellion against the machines rises from the ashes. ‘The Matrix‘ is written and directed by The Wachowskis. The movie features Keanu Reeves, Laurence Fishburne, Carrie-Anne Moss, Hugo Weaving, and Joe Pantoliano in major roles.