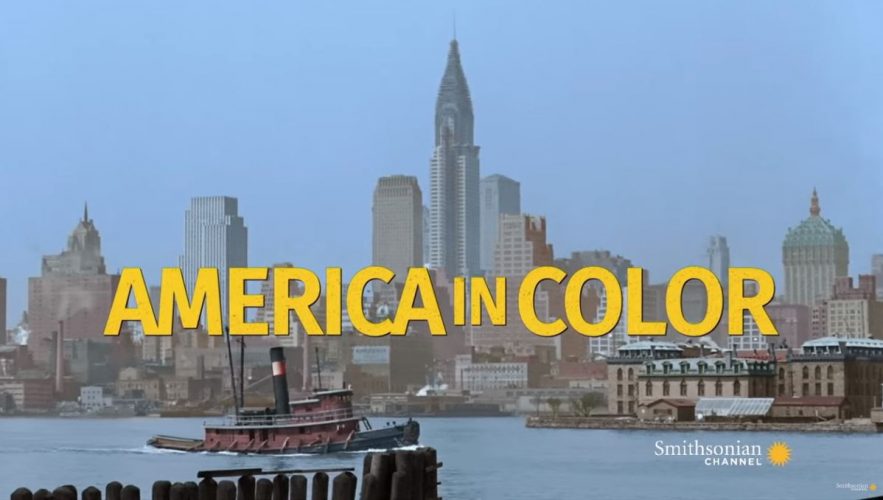 The story of America isn’t something that can be written by one writer. It is a revolution. From nothing to everything. America evolved from the 1920s to 1960s the most, and each and every achievement, every milestone was fortunately captured. All these tapes were in black and white naturally due to the absence of colour television back in the 20s. Watching historical videos without colour could surely be a nostalgic watch but the fact that the videos that were originally shot without colour, can now be enjoyed with color, is an achievement for American television itself, and one of the key elements that reiterate the greatness of America.

America in Colour is an intense recollection of all the historical changes, benchmarks and events that shaped the United States of America as we know it, but in colour. America in Colour has rare footage of President Franklin D. Roosevelt, the surprise military strike- The attack on Pearl Harbor, the debate of Kennedy and Nixon. All the events are thoroughly researched by the producers to maintain accuracy in the colouring of the footage, in order to keep the integrity of its history intact. The first season of the show premiered on July 2, 2017, on Smithsonian Channel, and the second aired on November 18, 2018. Here’s everything we know about America in Color season 3.

Since America in Color is a grand compilation of history, it comprises of the original footage of events, which makes us hop onto a time machine and be taken all the way back to early America. The series is narrated by Liev Schreiber, actor, director, screenwriter and producer who has appeared in multiple independent films. In the pilot of the series, he starts out by saying, “This is the story of America, seen in colour, for the first time”, as a middle-aged woman shrieks in the background with joy, “what is the greatest country in the whole world?”, followed by other women, excitedly yelling, “America!”

What is America in Color About?

Christopher Columbus was determined to find a direct water route west from Europe to Asia, a direct connection and even after four trips starting out in 1492, he failed miserably. Instead, he accidentally stumbled upon the Caribbean islands, now called the Bahamas, and also fortunately on a piece of land, which now is considered as a leading nation, in all aspects of life, The United States of America. Fast forward almost a millennium, and this is where our story begins.

America in Colour lays out events from the early 1920s in the pilot of the series that focuses on the booming economical and technological success. From Henry Ford igniting the automobile industry, Charles Lindbergh making the first solo transatlantic aeroplane to disastrous Wall Street Crash of 1929, also called Black Tuesday, it covers all events of significance that transpired during the period.

The show jumps a decade in the second episode as it explains The Great Depression, which had thousands of Americans living on streets and starving. It was considered the greatest economic shock America has ever received. At the end of Prohibition, we see America celebrating, dancing, swirling with joy, seen for the first time in colour. We follow the story of America through the 1940s where World War II had a significant impact on the economy and workforce of the States.

Next, in the 1950s, there was some peace and quiet, America experienced huge economic prosperity as they silently worked harder to build a collapsing nation. As they say, it’s quiet before the storm, and the storm struck as the Chinese attacked the American forces. Racism, hatred and division followed. The last episode of the season 1 has us following a nation that is very similar to what we see now when we look at America – highly developed on all grounds, standing tall with every tool at their disposal. A significant event of the 50s was the Vietnam War which divided the nation, leading to mass killings and assassinations.

Season 2, which aired nearly a year after the first season’s finale, explores the various possibilities for a new and developing America in the early 20th century. It gives us a closer look at the families of America who witnessed the evolution with their own eyes, over the course of 70 years. The season involves us in matters of corruption and organised crime. It focuses on giving us the taste of the lives of people who were directly or indirectly affected by several changes that took place over the years. Episode 4 is all about the society and its ideals. Further episodes portray the conquests of the likes of the Rockefellers and Vanderbilts, with the series culminating into a riveting finale that has us drooling over the golden age of Hollywood.

America in Color Season 3 Release Date: When will it premiere?

America in Color season 3 is set to premiere on November 17, 2019 on Smithsonian Channel. Don’t forget to mark your calendars.

Check out the season 1 trailer of the show to refresh your memories. If you haven’t seen the show yet head over to Smithsonian Channel that has all previous seasons available on it. You can even watch it on Prime Video.