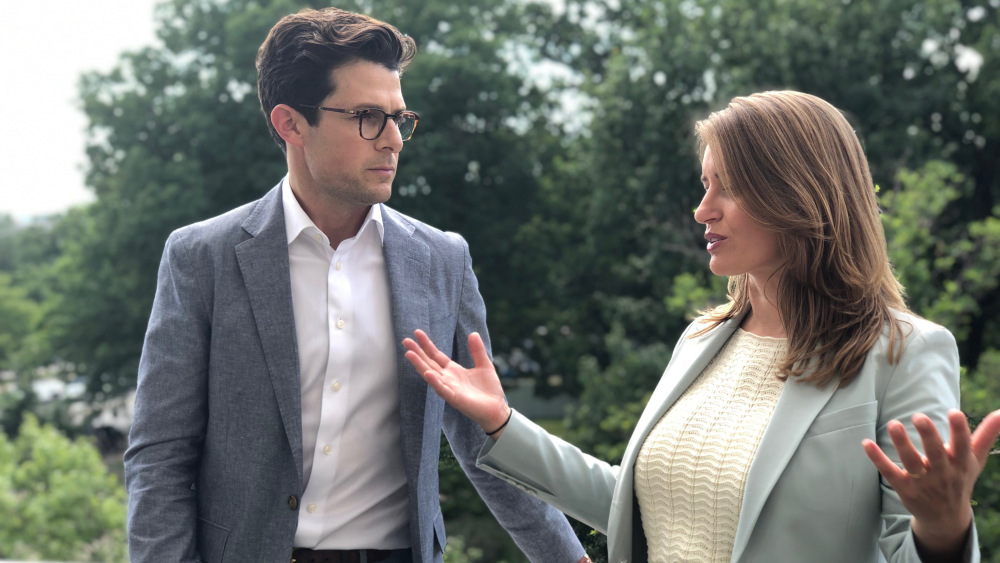 ‘American Swamp’ is a documentary series that airs on MSNBC. The series follows NBC News journalists Katy Tur and Jacob Soboroff as they travel across the United States and explore areas of political dysfunctionality. More precisely, the journalist duo try to investigate the reality behind United States President Donald Trump’s new controversial chant, “Drain the Swamp”. Here is what we know so far about the series.

American Swamp Cast: Who is in it?

The documentary series is hosted by the famous NBC News journalist duo Katy Tur and Jacob Soboroff. Katy Tur is an American author and broadcast journalist working for NBC News. She anchors for MSNBC Live and has reported for Early Today, Today, NBC Nightly News, Meet the Press, WNBC-TV, MSNBC, and The Weather Channel – all of which are NBC news platforms. She also wrote the 2017 book called ‘Unbelievable: My Front-Row Seat to the Craziest Campaign in American History’.

Jacob Hirsch Soboroff also works for NBC News and MSNBC as a correspondent. Previously, he was the host of YouTube Nation and the co-host of TakePart Live on Pivot TV. He was also one of the founding hosts for HuffPost Live, which is The Huffington Post’s live streaming network.

American Swamp Plot: What is it about?

The show follows NBC News journalist duo Katy Tur and Jacob Soboroff as they go around the United States of America, interviewing both present and ex-senators and those involved with US politics, in order to try and uncover the reality behind Donald Trump’s famous chant, “drain the swamp.

Katy Tur says, “What Jacob and I wanted to figure out was why the Congress doesn’t pass that may bills. Or why don’t many people feel Congress is working for them? Why we have only a 43 percent turnout for elections. And why is there so much corrupting money in politics, and how did it get there? Big questions that have been out there for a long time, and we’ve tried to tackle them in an engaging way.” Soboroff adds to this by saying, “What we’re exploring is the disconnect between Washington and everyday American lives.”

The term draining the swamp comes from a time when malaria was a big threat in both the United States and Europe and draining the swamps were an effective way of dealing with the problem by stopping the spread of the disease. It was Ronald Reagan in 1980 who created the Grace Commission that identified $424 billion wasteful government spending and gave the call to “drain the swamp” in Washington. Rebecca Harington reported in the Business Insider that, “The kicker is that Washington wasn’t even built on a swamp. That’s a common misconception, since the city’s in a low-lying area between the Anacostia and the Potomac rivers, as urban historian Don Hawkins explained in The Washington Post. Furthermore, draining the swamp is the worst thing you can do to it, environmentally speaking. It’s even against the law in some municipalities of the US. Draining an actual swamp can take necessary water from the environment that plants, animals, and other creatures need to survive. It sure is catchy though.”

American Swamp Season 2 Release Date: When will it premiere?

‘American Swamp’ Season 1 premiered on July 28, 2019, on MSNBC. A four-part series in a very novel format caught viewers attention as they got to hear from people inside American politics who shared their perspectives on what draining the swamp meant.

As far as the next season goes, MSNBC hasn’t made any announcement yet. It is possible that the duo Katy Tur and Jacob Soboroff come back for some another subject that needs some attention. Though, show’s renewal is not completely out of question, especially, considering the fact that 2020 is an election year. Whatever be the case, we will update you about ‘American Swamp’ Season 2 release as soon as we come to know about it.

While we wait for an update on season 2, here is the trailer for ‘American Swamp’ Season 1: