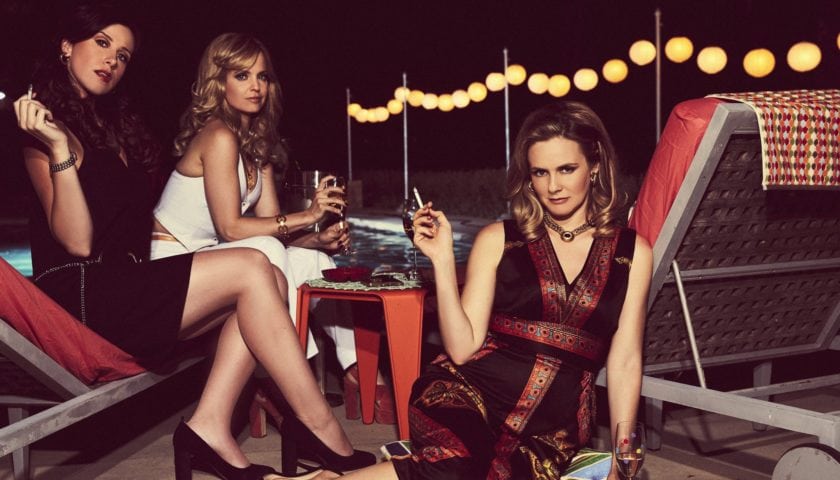 ‘American Woman’ is a comedy-drama television series that airs on the Paramount Network. The show first premiered on June 7, 2018. It has been created by John Riggi of ’30 Rock’ fame, and the premise is based on the life and childhood of the reality star and actress Kyle Richards, who is known for works like ‘Little House on the Prairie’ and ‘The Real Housewives of Beverly Hills‘.

The show revolves around second-wave feminism movement that gained traction in a changing ’70s America. Bonnie decides to leave her unhappy life and raise two kids on her own with the help of her best friends. She has to balance her personal needs and those of her family as she attempts to find her own brand of independence in a society that is reluctant to give it to her.

With so many discourses cropping up around feminism, a lot of feminist narratives are finding their way into popular culture and its representation as well. One only needs to think of ‘Jessica Jones‘, or ‘The Handmaid’s Tale‘, or even the controversy Daenerys Targaryen’s character arc sparked in ‘Game of Thrones‘. While ‘American Woman’ could have been right up there with them, especially due to the fact that its content is based in reality, the execution was not quite good and critics pointed this out, saying, “Stereotypes and ambiguity shadow the well-meaning intentions of ‘American Woman’, though the nostalgic period setting is cute.”

American Woman Cast: Who is in it?

Since ‘American Woman’ is a woman-centered show with feminist themes, it is only natural that the main cast is solely made up of women. We have Alicia Silverstone of ‘Batman & Robin‘ and ‘The Killing of a Sacred Deer‘ fame, who appears in the role of the protagonist Bonnie Nolan. Her two friends, Kathleen Callahan and Diana Vaughan are played by Mena Suvari, of ‘American Beauty‘ and ‘Six Feet Under‘ fame, and Jennifer Bartels, respectively. Makenna James of ‘Teen Wolf’ fame appears as Becca Nolan, the intellectual but rebellious older daughter of Bonnie, while Lia McHugh is seen as Jessica Nolan, the younger daughter.

There are several recurring characters who help set the tone of the show, but the most notable is James Tupper of ‘Revenge’ and ‘Big Little Lies‘ fame, who plays the role of Steve, Bonnie’s ex-husband. If there is an upcoming season, hopefully, we will get to see the main characters return and maybe some new cast members will be thrown into the mix to keep things interesting.

American Woman Plot: What is it about?

According to the official synopsis of the show, ‘American Woman’ is about “Bonnie, an unconventional mother struggling to raise her two daughters after leaving her husband amid the rise of second-wave feminism in the 1970s. With the help of her two best friends, Kathleen and Diana, these three women each discover their own brand of independence in a glamorous and ever-changing world reluctant to give it”.

When we are first introduced to the show, we see Bonnie leave her husband after she discovers him with another woman, not to mention the fact that he was under investigation for something shady. Without any marketable skills, she finds herself rather alone in the world, except for her friends and daughters. The portrayal of friends is important since one of them is idyllic while the other is pragmatic and knows that the real world is not too kind to a working-class woman.

Despite showing potential, the series distinctly lacks any voice that might draw and bind the viewers to the tale it is about to convey. It might have its heart in the right place, but the execution is not at all proper. Considering the time the show came out in, you must be thinking to yourself that somehow we can tie the narrative of the show to either the #MeToo movement or the Time’s Up movement. However, that would be reductionist, since the series deals with primarily white women going through some minor inconveniences. This is not to say that their stories do not deserve to be told. Of course, they do, but the stories could be told much better with a lot more nuance. What is even more frustrating is the fact that a show that categorizes itself as a comedy has very few moments of laughter initially. However, the final critical nail in the coffin would have to be the show’s unsure nature as to what it wants to reflect regarding popular culture.

RogerEbert.com echoes my sentiments about the show, saying, “It’s unclear who ‘American Woman’ is for, whether the show’s producers are aiming to get caught up in the wave of shows and films tapping into the discontent and anger of women in the U.S. and elsewhere, or hoping to capitalize on the “Real Housewives” fanbase—and those things aren’t mutually exclusive, either. Whatever the goal, the result is the same: A sadly thin, tonally inconsistent series that’s unsuccessful as a comedy, off-putting as a drama, middling as a period piece and far too shallow to be anything resembling social commentary. At least it looks great—and as its lead would tell you, between declarations of independence, looking great is a requirement.”

American Woman Season 2 Release Date: When will it premiere?

‘American Woman’ Season 1 premiered on June 7, 2018. While the show started off with positive ratings in terms of viewership, the numbers soon declined, and this prompted the network to cancel the series after one season. While there is always a chance in today’s day and age that a show might be picked up later and aired elsewhere, for now, Season 2 stands canceled. If anything changes, and the show does get renewed, we will update this section with ‘American Woman’ Season 1 release date.

Checking out the trailer of ‘American Woman’ season 1 below. If you have not seen the series, we recommend you watch something else for comic relief.