Will Animals Return For Season 4 or Has it Been Cancelled? 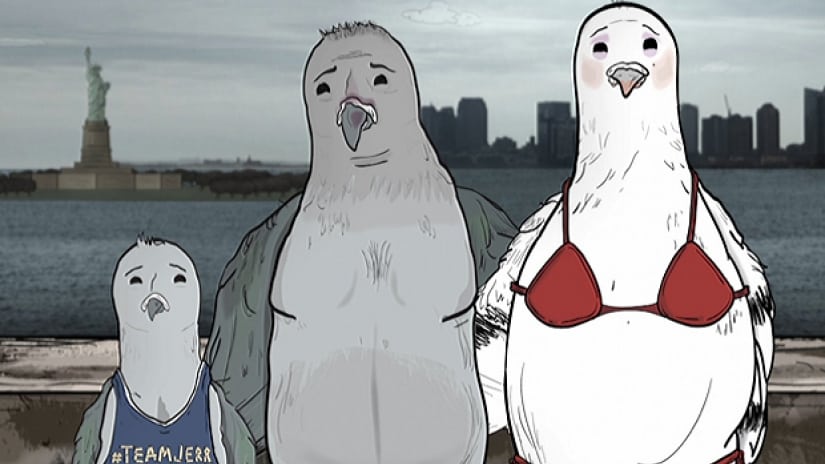 ‘Animals’ is an American animated comedy television series that has been created by Phil Matarese and Mike Luciano. After proving its worth on the big screen, animation has made its way to our television screens also. This show is one such animated comedy series. As the name suggests, you will find animals of every variety, be it cats, dogs, pigeons, flies or squirrels. After its independent premiere at the Sundance Film Festival, the show was made a television series, which has been quite successful. Each season follows a different storyline. Various comedy artists lend their voices for the show.

The series used to air on HBO and first premiered on February 5, 2016. Using animals in an animated format to tell stories that are pertinent to human society is not a novel concept. In fact, Wes Anderson has done it several times, be it in ‘Fantastic Mr. Fox’ or ‘Isle of Dogs’. If you have seen these films, you can begin to grasp the direction in which the show tries to take us, displaying that the woes of non-human urban species are strikingly similar to our own.

Naturally, this approach intrigued audiences and the show managed to gather a decent fan following. Critics too praised it, saying that the deadpan approach that this series takes makes the off the wall comedy all the more delicious. They also described the series as being brilliant and batty and turning a lot of notions upside down. Read on about this show here.

Animals Cast: Who is in it?

The cast of ‘Animals’ is led by Phil Matarese and Mike Luciano. Not only do they appear as themselves, but they also lend their voices to the characters of various humans and animals. Over the seasons, there have been several notable recurring and guest characters. One of the most notable recurring characters has been Demi Moore of ‘Indecent Proposal‘ and ‘A Few Good Men‘ fame, who appears as The General, the human antagonist in the third season of the show.

Among the recurring animal characters, is Lauren Lapkus of ‘Orange is the New Black‘ fame, who is seen in the role of Jacob, CO298. However, the most notable part of the show is its guest cast which has had a host of celebrities over the seasons. It speaks tons about the show’s popularity to know that so many famous people have been involved with it. Some of the names that stand out include Aziz Ansari of ‘Master of None‘ fame, Emilia Clarke who is now known worldwide for playing the role of Daenerys Targaryen in ‘Game of Thrones‘, Awkwafina of ‘Crazy Rich Asians‘ fame, Dan Harmon and Justin Roiland of ‘Rick and Morty‘ fame, Jonah Hill of ‘The Wolf of Wall Street‘ fame, and Cobie Smulders, who is best known for playing Robin in ‘How I Met Your Mother‘ before she became Agent Hill in the popular MCU movies. There are several others like Usher and Whoopi Goldberg who have also been involved in the show.

Animals Plot: What is it about?

The plot of ‘Animals’ is basically reflecting human problems, and very postmodern ones at that, through the lens of animals living in an urban space. Be it lovelorn rats, aging bedbugs who are suffering a midlife crisis, or gender-questioning pigeons, the show manages to mirror the moral ambiguity we face every day, the awkward small talk we are forced to make to keep up semblances of social interactions, and the existential woes of urban living. Every season has a separate story arc, and sometimes we get to see live action sequences.

The first season shows a corrupt mayor and the events that lead to his reelection, while the second season is based on a reporter who investigates a virus outbreak that has been triggered by a mad scientist called Dr. Labcoat. This gas he has released can wipe out all life forms in New York, and the season after that takes the story to three years after this incident, now dubbed ‘Green Day’. We see that animals have formed governments and they are observed by two soldiers who begin to lose their grip on reality.

While the comic tone of the show started being sardonically detached and akin to boundary dancing, it quickly resembled a lot of other shows, like those on Adult Swim. As a result, there is some static sameness to the show, and the presentation can get a little dreary as everything seems to be set against a perpetually rainy New York City. The Hollywood Reporter sums this well, saying, “Despite its lack of revelation, it’s a funny show and settles into its wheelhouse whenever there’s a combination of sex, swearing, disaffected voyeurism and some spoofing of bro behavior. It’s one of those shows that lead you to realize over the long term that there’s more to it in the narrative ambition, a la Netflix’s ‘Bojack Horseman‘ and the spot-on laconic weirdness of ‘The Life & Times Of Tim’ “.

Animals Season 4 Release Date: When will it premiere?

‘Animals’ Season 3 premiered on August 3, 2018. As far as the next season goes, we have bad news for the fans. In October 2018, HBO announced that the series had been canceled. This is probably because of the hit or miss nature of the show, and it was a miss during the time it aired. It was one of the lowest rated and least watched original shows on the network, which made its cancelation an inevitable eventuality.

Though, fans should not lose all their hopes. There’s still a possibility that some other network picks up the show. If that happens, we will update you about ‘Animals’ Season 4 release date.

While we wait for any positive news on ‘Animals’ Season 4, check out the season 3 trailer below. If you haven’t seen the show yet, head over to HBO to catch all the episodes of the previous seasons.