Where to Stream Annihilation? 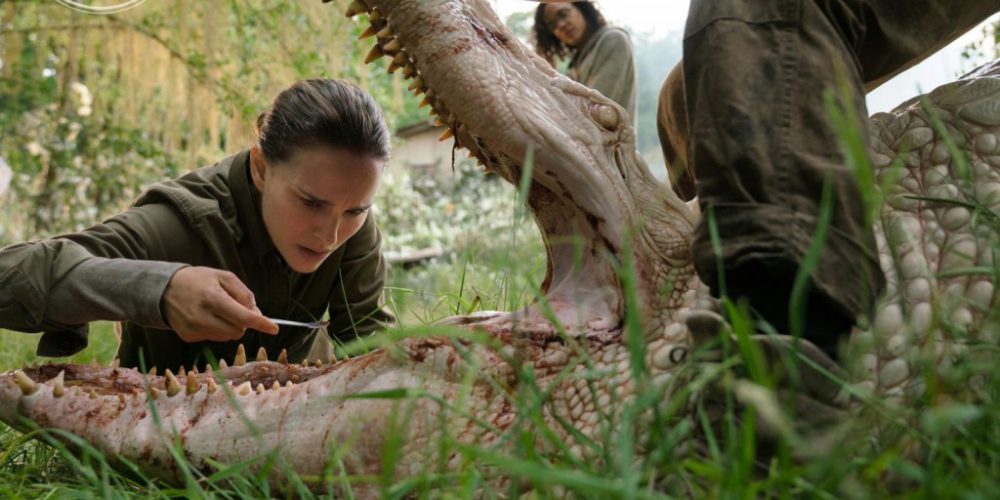 Science fiction has always pushed the boundaries of human curiosity, daring to ask questions that we normally do not ask in everyday life. In today’s world, science fiction has evolved to more than just outer space, and has begun to encompass psychedelic and psychological aspects of human nature into its tales, making it thoroughly more enjoyable and all the more bone-chilling. The 2018 film ‘Annihilation’, which is based on Jeff VanderMeer’s novel of the same name, is a prime example.

What happens when you step into the unknown and emerge as a different person? What happens when the unknown changes you, or changes something within you into the unrecognizable? What lies at the heart of this unknown? These are all questions raised in the movie and tackled wonderfully as the narrative unfolds and we see the praiseworthy visuals, direction, acting, and the thought-provoking storyline. Critics have addressed the nature of the story, saying that it speaks about “depression, grief and the human propensity for self-destruction”.

This is definitely one of the better sci-fi movies to have come out in recent years, almost in the same league as ‘Arrival‘. And if you have not seen ‘Annihilation’, you definitely need to watch it. If you have seen the film, you must realize that it has many layers to unpack, and deserves a re-watch. Either way, we have got you covered about where to watch the movie, but before that, let us try and explain the plot of ‘Annihilation’.

What is Annihilation About?

When the story of ‘Annihilation’ begins, we see Lena (played by Natalie Portman), a cellular biology professor and an ex-US soldier, being questioned. It turns out that she was part of an expedition to an anomalous zone called ‘the Shimmer’ and was the only one who managed to return. What is ‘the Shimmer’, you might ask. Well, it emerged from a meteor and has been expanding its boundaries. Though many expeditions had been arranged, only Lena’s husband managed to return, but his health began to quickly deteriorate, which prompted Lena to undertake an expedition to the heart of the mystery. She is accompanied by three other women, a physicist, Josie, a paramedic, Anya Thorensen, and a geomorphologist called Cassie “Cass” Sheppard.

When the group enters ‘the Shimmer’, they quickly find that their communication equipment ceases to function, and they run into various mutated plants and animals, like an albino alligator with shark-like teeth. They also find a tape from Lena’s husband’s expedition showing that ‘the Shimmer’ affected team members from the last expedition as well. The group theorizes that this territory is a prism for DNA and can thus change anything within its boundaries. Anya is overcome with paranoia and turns against the group. However, a persistent mutated bear that had killed Cass, returns, and lures Anya away, killing her as well. Josie uses this opportunity to shoot and kill the bear herself.

Ventress, the physicist, heads to the center of ‘the Shimmer’ trying to get to the bottom of the mystery, and Lena follows her, only to discover another videotape that seems to indicate that her husband Kane committed suicide and a doppelganger took his place. Ventress meets her end, and Lena tangles with one of these humanoid forms, which seems to oscillate between copying Lena and attacking her. However, using a grenade, she gets the better of this creature, and ‘the Shimmer’ also dissipates. When Lena returns and asks Kane’s doppelganger if he is really Kane, she has the question thrown back at her. The film ends on an ambiguous note as Lena does not answer, embracing Kane instead, and we see their irises shimmer.

Is this merely sorrow, or are they both doppelgangers now? To find out and come up with your own theories, you have to watch ‘Annihilation’. So allow us to tell you where you can see the film.

Is Annihilation on Netflix?

Netflix has a fantastic library hosting a range of diverse content, and sci-fi is no exception. However, the premier streaming platform does not have ‘Annihilation’ available in the US region though it is available elsewhere. Don’t let this get you down. If you are in the mood for sci-fi, check out ‘I Am Mother‘, or ‘The Cloverfield Paradox‘, and if you want something truly mind-bending, then we’d recommend ‘Black Mirror: Bandersnatch‘.

Is Annihilation on Hulu?

Hulu has a splendid and fast-growing library, and they have been quick to add ‘Annihilation’ to it. Thus, if you have a Hulu subscription, you are good to go and can watch the movie here.

Is Annihilation on Amazon Prime?

Amazon Prime has one of the most enviable libraries, right after Netflix. But it seems as though the streaming platform has one-upped its competitor in this case, because you can watch ‘Annihilation’ with your Prime subscription. Catch the movie here.

Where Can I Stream Annihilation Online?

Where Can I Watch Annihilation Online For Free?

How could we forget about the freeloaders? There are a bunch of sci-fi movies coming out all the time, and if you are a fan of the genre, you have to pick and choose sometimes. Although ‘Annihilation’ has been well received, there might still be those who are skeptical about financial commitments before they watch the movie. We recommend you try the free trial periods offered by Hulu and Amazon Prime, and watch the movie within the one-week time-frame.

However, considering the amount of money and effort that goes into making sci-fi films, and the fact that ‘Annihilation’ is actually a very well made and thought-provoking movie, we strongly urge our readers to pay for what they consume.