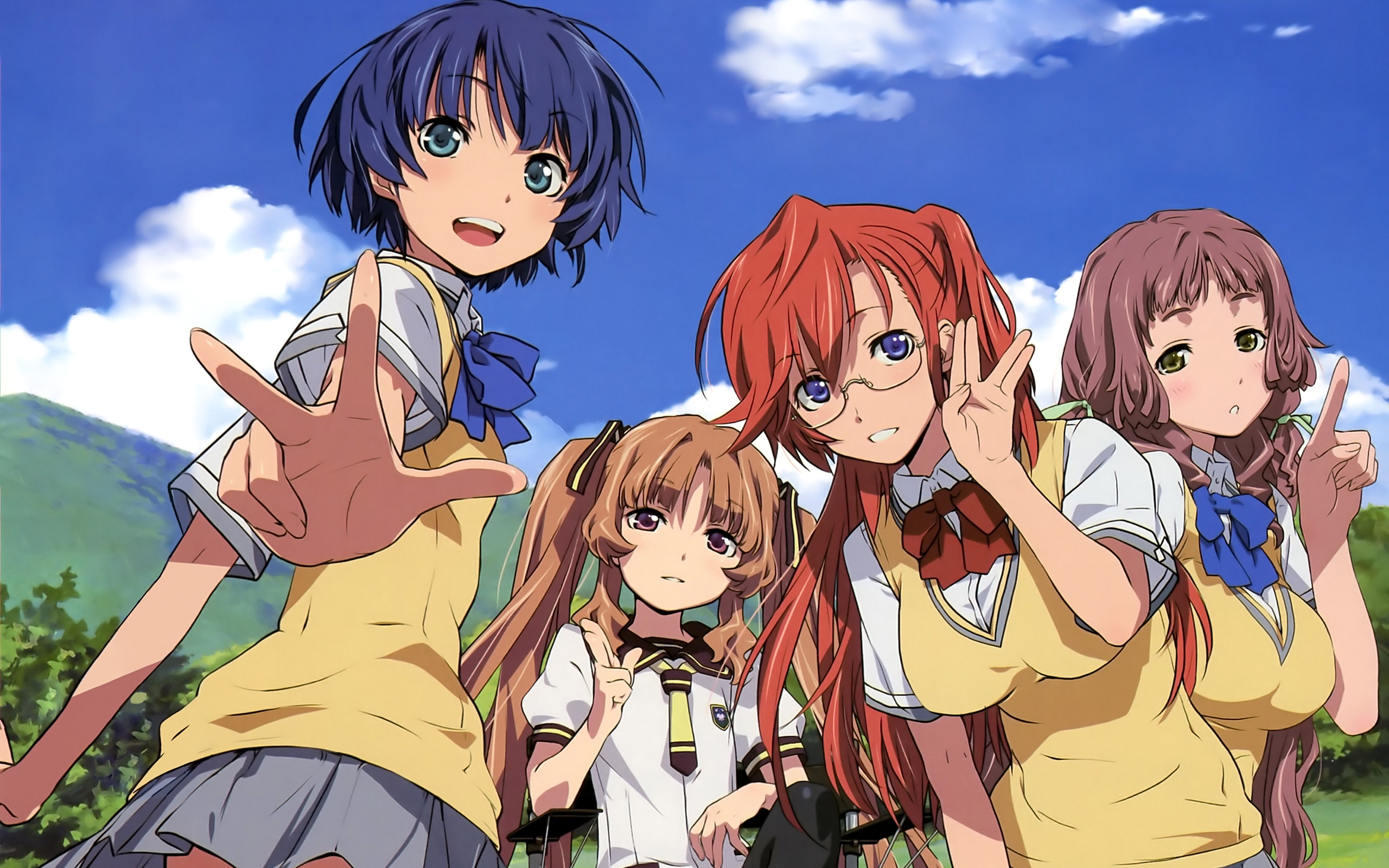 ‘Ano Natsu de Matteru’—also known as ‘Waiting in the Summer’—is a rather unusual anime. It basically just mixes the new and old conventions of romance anime while exploring a plot that revolves around summer break, filmmaking and also, some science fiction. Some of its haters claim that it forcefully takes troupes of other famous shows and just combines them together to portray what it does. But that is far from true as there is a lot more to it than just that. Also, many have been comparing this one with ‘AnoHana‘ and though the aesthetics of the two anime are quite similar, everything else is entirely different. So comparing the two is just downright stupid. One flaw about ‘Ano Natsu de Matteru’ that I cannot defend is its excessive cheesiness. But then again, that is something that purely comes down to one’s preferences. And despite all the corny dialogues and love octagons, the relationship between the two main characters feels quite genuine.

Being a short anime of just 12 episodes, it often suffers from pacing issues, especially towards the end. Also, it has one of those fanservice beach episodes that just comes out of nowhere and serves absolutely no purpose to the story. Because of this, ‘Ano Natsu de Matteru’ almost comes off as a typical harem but is saved by better episodes that follow. Overall, ‘Ano Natsu de Matteru’ is not a perfect show and has a lot of evident flaws that cannot be overlooked. Despite all of this, it does so well with its strengths and presents so many good moments that you’re forced to brush off its bad side and appreciate it for what it truly is.

‘Ano Natsu de Matteru’ Season 1 premiered on January 10, 2012 and went on till March 27, 2012 and during this span, it released a total of 12 episodes. The first season was then followed by “Special” episode which was released on August 29, 2014. Since its release, the show has been doing fairly well and also has a decent rating on most platforms. There were also several rumors about its confirmation back in 2014 but it turns out that these were not true.

As of now, there isn’t much we can say about its renewal as there has been no confirmation from the Studio’s end. Since it’s an anime original, the creators will not really have a problem with continuing the story even further as they don’t have to rely on any source material. But a season two still seems a little less likely because at the end of the day, ‘Anu Natsu de Matteru’ is just an average show with average sales. Even then, if there are any confirmations regarding ‘Ano Natsu de Matteru’ Season 2 release date, we will surely update it here in this section.

‘Anu Natsu de Matteru’ has been officially licensed under Sentai Filmworks and its English dub titled ‘Waiting in the Summer’ can be found on Crunchyroll.

Kaito Kirishima stands at the edge of a bridge one and tries to test his new camera. While he does this, a blue streak in the sky catches his attention and before he knows it, he is blown out of where he is standing. Just before he drifts into unconsciousness, a hand reaches out to grab him. The next day he wakes up on his own bed feeling all confused about what happened the previous day and how exactly did he end up on his bed. What’s even more strange is that he has no apparent injuries from the night before. But soon, he starts to forget about the incident as he gets busy with his school life.

At school, his friends get really excited about his new camera and decide to use it for making a film in the upcoming summer break. Kaito’s friend notices that he has a thing for the new upperclassmen named Ichika Takatsuki and that’s when he decides to invite her and her friend Remon Yamano for their film making project. Soon, the break turns into one of the most memorable and entertaining summers they have ever had. And as they spend more time together, apart from all the movie making, they discover that their bond is getting much stronger while a deep meaningful inner feeling keeps nagging them to confront everything that they hold inside.

Tetsurou Ishigaki is a close friend of Kanna and Kaito’s. Later, he really starts to like Kanna but after realizing that she has a thing for Kaito, he encourages a relationship between them. He later gets really close to Mio after he gets to know that she has a crush on him. He even confesses his feelings to Kanna later, even after knowing that she’ll say no, just to get it out of his mind. He has long light blue messy hair and blue eyes. He usually wears muscle t-shirts and button-down shirts along with rolled up pants. On the outside, he has an upbeat attitude but he tends to hide his feelings of jealousy with a smile. He later learns to deal with these feelings when he gets closer to Mio.

Kaito is the main protagonist of the series who is a first-year high school student and also an avid photographer who walks around with the 8mm handheld camera that he has inherited from his grandfather. Because of his passion for filmmaking, his friends often refer to him as “The Director”. He lives in a huge home along with his sister Nanami Kirishima and their place is usually more or less of base camp for all their friends. He has unkempt grey hair with brown eyes and he sports thick half-framed glasses. He starts off as a shy and reserved individual but as he starts spending more time with Ichika, he becomes more cheerful and open.

Mio Kitahara is a close friend of Kanna’s, who later starts liking Kaito. She is the most soft-spoken person in the group and is willing to help everyone. She helps Tetsuro deal with his feelings of jealousy when it comes to Kaito and Kanna’s relationship and while she does this, she also tries to deal with her own feelings for Kaito. Out of everyone else in the group, she is the only person who puts others before herself and holds no negative feelings for others. She has long thick brown hair and light green eyes. Her face always has a very innocent and warm look that pleases everyone.

Ichika Takatsuki is a foreign student who suddenly gets transferred to Kaito’s high school. She has long red hair, violet eyes and like most other characters of the anime, she also sports a pair of glasses. She is really kind and polite to everyone and also has a thing for weird food combinations. Despite being aware of Kaito’s feelings, she treats him in the best possible way and looks after him.

Kanna is a cheerful outgoing girl who is a close friend of Kaito and Tetsurou’s. She has a crush on Kaito and Kaito’s sister is very well aware of this. She always tries her best to promote a relationship between the two as she believes that they’re both made for each other. She is a really cute girl with short blue fluffy hair and light blue eyes. Though she wants Kaito all for herself, his happiness matters to him. She is also a little tomboyish and only wears girly stuff on special occasions. She also gets very defensive when people question the efforts she’s putting in to get Kaito’s attention and gets very emotional when Kaito chooses Ichika over her.