Another Life Season 2: Everything We Know

Created by Aaron Martin, ‘Another Life’ (2019) is a Netflix sci-fi drama series about a crucial first contact and space exploration mission being undertaken to save life on earth from an alien artifact that has just landed on its surface. Since its release in 2019, the series has been appreciated for the strong performances from the talented cast members. However, it has also been widely criticized for its shallow screenplay that unoriginally strings together plot-lines from various classic films and series of the genre.

Nevertheless, like wine, the series improves as it matures, and the cliffhanger ending of the finale of the first season left many viewers puzzled. If you too have been wishing for the arrival of ‘Another Life’ season 2, then the following details will tell you all you need to know!

‘Another Life’ season 1 was released on July 25, 2019, on Netflix. The inaugural season comprises 10 episodes with a running time of 37-61 minutes each.

The streaming platform renewed the series for a second 10-part season on October 29, 2019. Filming was originally supposed to take place between March 2, 2020, and June 9, 2020, in Vancouver, British Columbia, but was halted due to the current global pandemic. It resumed on August 28, 2020, and was expected to conclude on November 24, 2020, until another delay postponed that target.

Finally, ‘Battlestar Galactica’ star Katee Sackhoff, who is not only a lead actor but a producer on ‘Another Life’, confirmed on Instagram that shooting for the second season wrapped up in December 2020. While no official release date has been announced, it is highly likely that ‘Another Life’ season 2 could land on Netflix sometime in or after mid-2021. 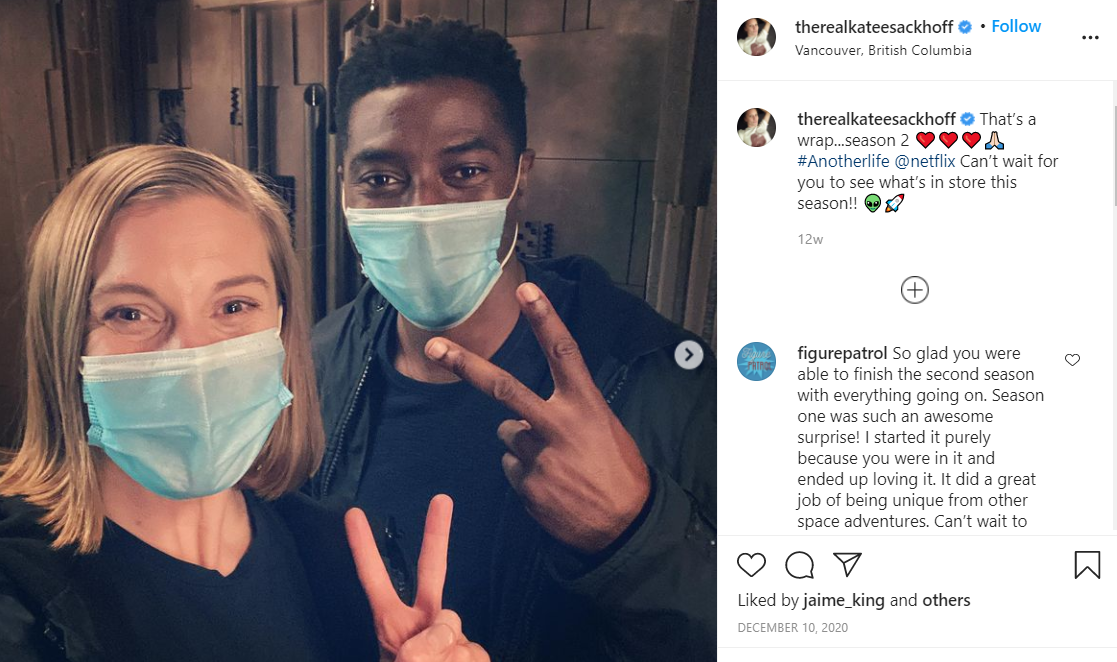 Moreover, fans would be delighted to learn that Sackhoff believes that the show could span at least 3 seasons. She told Collider, “So, we know where the show potentially will go for the first three seasons. As an actor, that was new for me. To really be a part of those conversations and to have an opinion was really cool.”

Another Life Season 2: Who can be in it?

Another Life Season 2 Plot: What can it be About?

The events of season 1 play out across two worlds: one in space where Niko leads the crew of the spaceship Salvare; the other on Earth, where Erik heads an expedition to communicate with the aliens, the Achaia, and cares for their daughter, Jana. Eventually, Niko learns that the Achaia is a menacing presence. However, the people on Earth, including Erik, are convinced to think of them as peaceful beings by Harper, whose mind is controlled by them.

Season 2 is expected to reveal whether the Achaia will harm or weaponize Jana and Erik, who have entered the Artifact in hopes of finding a cure for Jana’s leukemia. We will also find out when and how Niko and her crew get back to the Earth to save humankind from destruction at the hands of the deadly aliens.