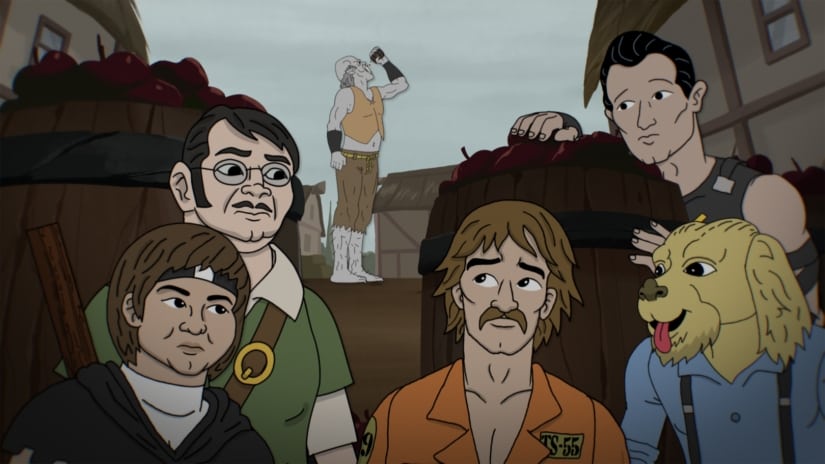 The way we view ‘superheroes’ as a distinct brand of vigilantes has been coloured by, at its farthest, the budding era of DC and Stan Lee’s golden age – but wacky superheroes is not exactly as modish a pish as the current trend for it will have you believe. Long before we had the sass of Bendis’ teenage Peter Parker, Cervante’s Don Quixote had charged a windmill back in the early 1600s.

Rolling forward to late 2010s: perhaps due in part to MCU’s success in bringing a great pinch of comedic elements into even a tense state of things, or to the success of Ryan Reynold’s Deadpool, offbeat and funny departures from traditional superhero mores has made its way well into the mainstream – look no further than the latest adaptation of Cap Marvel (Shazam, not Brie Larson) for reference.

Does Adult Swim’s attempt at recalling Apollo Gauntlet to an official remake also an attempt at riding this wave of parodying the superhero genre? The answer would be no. As much convenient as the timing was, Apollo Gauntlet was originally closer to Cervantes’ Quixote than it is to Obsidian’s South Park: The Fractured But Whole – i.e. it was more about building its own ingenious self-aware comedy than about mocking the modern superhero genre, and Adult Swim’s adaptation retains this spirit.

Apollo Gauntlet Cast: Who is in it?

Apollo Gauntlet lives up to the consistent features we have come to expect of an Adult Swim show: it is off-the-rails and bizarre (sometimes to the extremes). But more importantly, Adult Swim shows are all over the place in a ‘star power’ spectrum. Most of the pitches from the network does retain an indie vibe to it, though, and the cast of Apollo Gauntlet was arguably a no-brainer because of how well-acted the original web series was.

At the helm, Adult Swim brings back Myles Langlois, the creator and lead voice actor for the original show. He plays the eponymous protagonist, Paul Cassidy/Apollo Gauntlet, but Adult Swim does also introduce a number of big talents on board. Spongebob-star Tom Kenny voices the big bad, King Bellanus, while Ryan Kwanten, Mark Proksch, and Betsy Sodaro play Superknife, Monty, and Rubis respectively.

If a second series turns up, we do expect at least the main lead to be recast, including Kelsy Abbott as Daphne.

Apollo Gauntlet Plot: What is it about?

Apollo Gauntlet was originally a web series all the way back in 2012, the brainchild of Canadian animator and scriptwriter Myles Langlois. In a word, the show was a quip at He-man, obvious from how much the titular hero’s character design resembles He-man. The show was very zany and almost psychedelic in its barebone artwork – and for many, its low-budget product was a huge part of the charm.

Myles’ team-up with Adult Swim also recognizes this underproduced art style as part of the show’s spirit, resulting in a pastiche of the early 1980’s western animation predilections – not just inform, but also in technique. Apollo Gauntlet is what you get when you put He-man through a lense of Cervantes and modern crises. Its world is a quite unique futuristic development juxtaposed over medieval sensibility and aesthetics. Apollo Gauntlet is a heroic persona of Paul Cassidy, a Canadian police officer, and the heroic antics you expect of him is subsumed by his sentient pair of talking gauntlets – whether they being sentient is real or just Paul’s imagination.

The Adult Swim adaptation employs a more structured storytelling approach – giving scope for characters to get more depth over the original, the best example being the character of Dr Benign. Paul Cassidy played wonderfully by the creator of the show, is himself not very different from what you would expect of a wacky He-man parody. He spews movie references and awkwardly hilarious one-liners in his confrontation with his foes. He is righteous when the occasion demands. But he is also torn between the duality of being a superhero and the normalcy of being the friendly cool guy next street. It is his conversations with presumed self-aware gauntlets that bring the pivots for some of the show’s best comic moments, as it had in the original.

Apollo Gauntlet Season 2 Release Date: When will it premiere?

Apollo Gauntlet season 1 premiered on July 9, 2017. It was a very indie passion-project for its Canadian animator when it first cropped up in 2012 as a web series, but it has gained a solid fanbase over the years – if not escalated to cult status. Adult Swim’s adaptation does justice by the original and deserved the positive reception it got. However, as the creator Myles Langlois has stated on various occasions, the show is not particularly primed to drag on over seasons. We have not received news of a renewal either.

We can estimate an early 2020 release date if Apollo Gauntlet season 2 gets produced promptly, but we will have to wait for further input from Adult Swim to really know whether there will be one.

Although there has not been much traction about a second season, the fans are certainly hyped and half-expecting Adult Swim to drop a surprise teaser by 2019 fall. But on the bright side, you could always go and watch the season 2 of the original web series version, which is still up on youtube. While you wait for Adult Swim to make a new season, watch the trailer for the debut here.