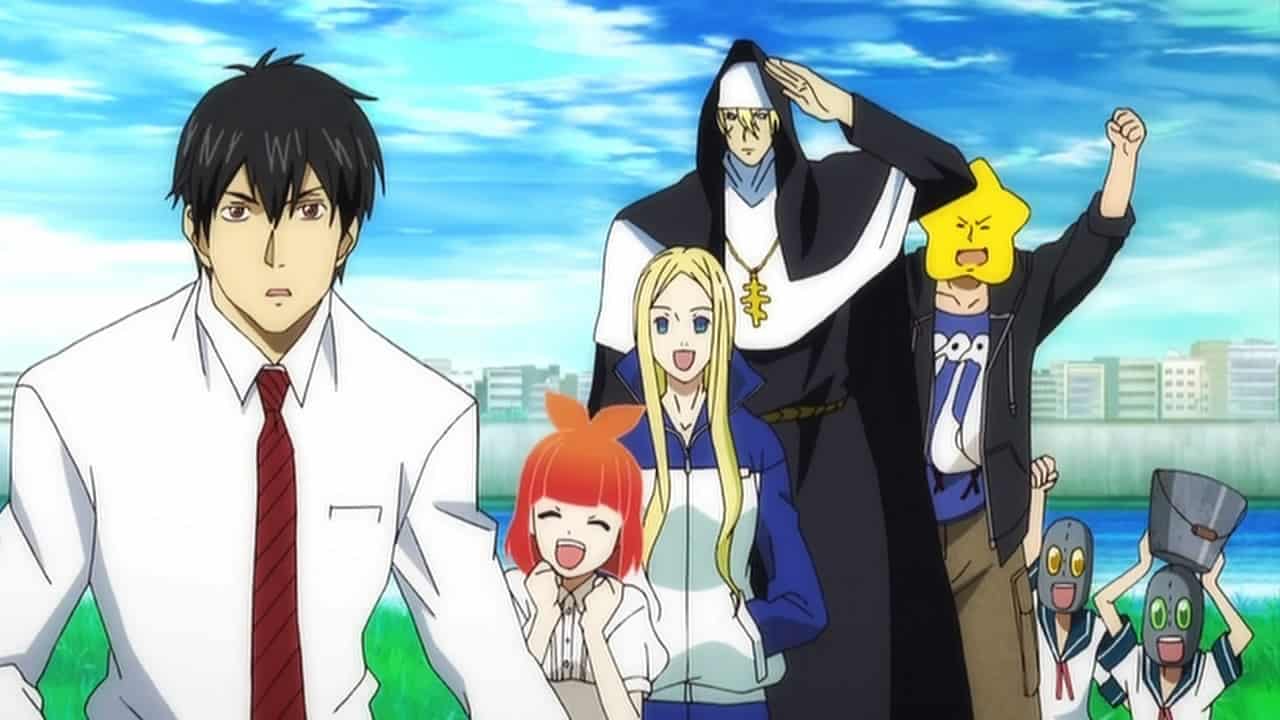 Even as adults, we all have certain beliefs that were passed on to us by our parents when we were kids. We were taught that we are supposed to conform to certain norms of society. If you have never really questioned these beliefs before, you surely will after you watch ‘Arakawa Under the Bridge’. The anime is more of a rom-com, which is obviously created for the Shoujo demographic but on the sidelines, it also brings in a story that shows how “right” and “wrong” can be two very subjective terms when a young man is introduced to a whole new world. The insanity of the characters in the show is the main source of comedy and some of these moments are just hilarious. But sadly, many of these characters are left undeveloped which is one of the biggest flaws of this show.

Shaft Studio, known for producing anime like ‘Bakemonogatari‘ and ‘Nisekoi‘, does a fairly good job with the animation quality and art style. Meanwhile, the sound, for the most part of it just goes unnoticed. All in all, ‘Awakara Under the Bridge’ is a fun show to watch if you’re simply looking for a comedy that revolves around many undeveloped eccentric characters. Even the romance side of it is not bad at all and will appeal to those who really enjoy typical romance anime. If you are able to enjoy the first few episodes of the show, then you will be able to get through with the entire series. But if you’re initially thrown off by its random art and slightly repetitive jokes, then it would be better to give up on it at the beginning itself as it won’t really get any better for you. For what it’s worth, ‘Arakawa Under the Bridge’ definitely deserves a try.

Arakawa Under the Bridge Season 3 Release Date: When will it premiere?

‘Arakawa Under the Bridge’ season 1 premiered on April 5, 2010 and with a total of 13 episodes, it ended on June 28, 2010. This was then followed by a season 2 which released on October 4, 2010 and went on till December 27,  2010. The second season is titled ‘Arakawa Under the Bridge x Bridge’ and has the same number of episodes as the first one. Now when it comes to the source material from which it has been adapted, it has way more content than what the anime covers in its two seasons. The manga has many different volumes with a lot more to its story and that’s probably the reason why many fans were expecting it to have another season.

The problem is that the anime is now almost a decade old and we still haven’t heard anything from the creators yet. Also, despite its popularity, ‘Arakawa Under the Bridge’ has quite an average overall rating on most popular platforms. So as of now, another season seems very unlikely but even then if get any official confirmations regarding ‘Arakawa Under the Bridge’ season 3 release date in the future, we will surely update it here in this section.

Arakawa Under the Bridge English Dub:

Like many other anime shows that have been licensed under NIS American, ‘Arakawa Under the Bridge’ does not have an official English Dub. You can still watch it with original Japanese audio and English Subtitles on Netflix and Amazon Prime.

Arakawa Under the Bridge Plot:

‘Arakawa Under the Bridge’ revolves around a young man named Kou Ichinomiya who is the son of a very wealthy businessman. He firmly believes that he should never owe any form of debt to anyone and even when he happens to be indebted, he tries to return it to the respective person as soon as possible. One fine day, he gets into a conflict with some mischievous teenagers on the Arakawa Bridge and somehow ends up falling in the river down below. Luckily, he is spotted by a girl nearby who saves him from downing, but now, he owes big time to this stranger who saved his life.

He gets really pissed off by this and insists that he must somehow pay her back for what she has done for him. Taking this opportunity for granted, the homeless girl who saved his life, asks him to be her boyfriend as the only thing that she wants in life is to fall in love. Kou is left with no choice but to date her and is forced to leave his old luxurious life to live with the girl in a cardboard box under the bridge. The life that now awaits Kou might just be better than what he expects it to be.

Arakawa Under the Bridge Characters:

Kou Ichinomiya is the main male protagonist of the series who is a 22-year-old university student. He is the head of several different companies and also set to be the heir of the Ichinomiya Empire built by his father. Since his childhood, his father has always taught him to never be indebted to anyone. His father even passes on a tie to him that has the same motto written on it. Having immense respect for his father, Kou makes sure that he lives by his words. Some teenagers steal his pants one day while he crosses the Arakawa Bridge and while getting it back, he somehow falls in the river below him. He is then saved by a poor girl named Nino who does not really expect anything in return. But he still asks her if he can provide her some money or a roof over her head. She says no to all of it and asks him to “experience love”. He is then forced to stay with her under the bridge without a real home.

Koi Ichinomiya is a fairly tall and good looking young man who has medium length black hair and sharp black eyes. He is usually seen in a crisp white shirt that is properly tucked inside black formal pants. Along with this, he sports black shoes and a red-colored tie. Like all the members of his family, every time Kou faces an extremely stressful situation, he tends to suffer from an asthma attack. While other college students of his age have a simple ordinary college life, he has already managed to buy himself a luxurious apartment and has earned close to 8 million yen at the age of 22.

Nino is a young homeless girl who claims that she is from the planet Venus. She has beautiful light blond hair and she is seen in a blue and white tracksuit all the time. When she sees Kou drowning in the river, she decides to help him with no selfish motives in mind. But when he insists that he must pay her back, she tells him that she wants him to “experience love with (her)”. She is also an incredible swimmer and she often dives deep to catch fish from the river. She is also a little forgetful and later, it becomes Kou’s job to remind her of all the important things she needs to do. Her home under the bridge is made out of cardboard and has a bed inside it that is made from velvet. Every time she feels nervous or frustrated, she tends to pull sweatshirt over face and climbs on a street lamp.

Read More in Anime Preview: Chobits | When They Cry