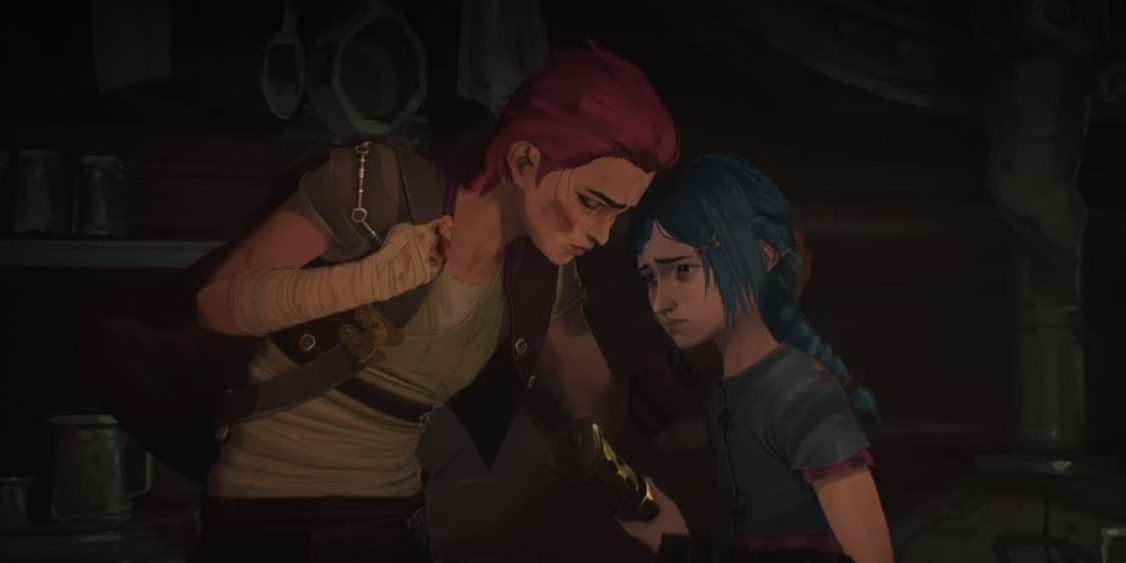 Developers Christian Linke and Alex Yee’s epic sci-fi animated series ‘Arcane’ is a treat for the senses. Loosely based on the characters featured in the video game series ‘League of Legends,’ the story of the Netflix original series transports the viewers to a futuristic world where the underground city of Zaun exists side by side with Piltover, the affluent metropolis above. The story unfolds through the eyes of sisters Vi and Powder.

The series was praised by critics and the audience due to its dynamic animation and lively voice acting. The heart-shattering third episode, titled ‘The Base Violence Necessary for Change,’ changes a lot of equations. Vander is presumably dead, and a disheartened Powder jumps into the lap of Silco. With the cliffhanger ending, you must be wondering about the future course of the story. We shall get to the spoilers of the fourth episode, but before that, let us recollect how and when you may catch the episode online.

‘Arcane’ season 1 episode 4 is set to premiere on November 13, 2021, at 9/8c on Netflix. Following the tripartite structure of the release (three episodes form an ‘act’), you may expect episodes 5 and 6 to premiere on the same day. The three upcoming episodes will construct ‘Act Two’ of three acts featured in the season. Plus, the first three episodes of the show released simultaneously on November 6, 2021.

You can catch ‘Arcane’ season 1 episode 4 on Netflix. The series is not available anywhere else for streaming. The new episodes premiere exclusively on Netflix, and you may need a subscription to the streaming service to catch the episode.

The fourth episode will presumably have a lot to cover. Right off the bat, the official teaser shows a time jump. Vi is held captive at an undisclosed location, while Powder grows up to be Jinx under the supervision of Silco. The early telltale signs of Powder’s mental instability are visible in the first three episodes, and in the third episode, Vi unknowingly christens her as Jinx.

Therefore, it is no wonder that the dreamy blue-haired girl grows up to be the notorious champion of the game. Powder (Jinx) will also face a masked enemy, and this can be Ekko. Following his abrupt disappearance from the third episode’s final minutes, we can speculate that Ekko will want to avenge Benzo’s death. However, even if the masked fighter turns out to be Ekko, the creators will have to show how Ekko reaches the point of fighting Powder.

At the end of the third episode, Marcus silences Vi with a sleeping agent. He can be the one responsible for the arrest of Vi. As the story will leap into an uncertain future, Jayce’s Hextech will most likely play a crucial role. Jayce will possibly create a hammer with the help of Hextech after his house of Talis. However, in the wrong hands, Hextech will cause visceral destruction. The underworld’s unrest will also reach a boiling point, taking the cities to the brink of war.