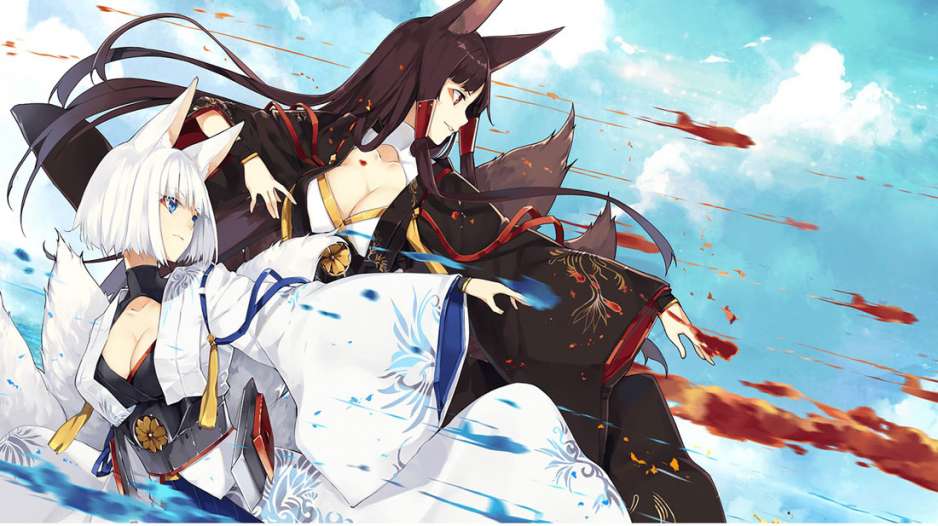 This could be a little bit of an exaggeration, but if executed properly, ‘Azur Lane’ could easily be the most memorable anime of this season. What made it a very powerful gaming franchise is its heavy use of Westernized military concepts and its familiar social RPG concepts. The whole idea of historical warfare ships being metaphorically re-envisioned as attractive anime girls might seem a little weird, but surprisingly, it works out really well. When it comes to the whole strategical approach of the game with respect to all the battles that featured in it, it is well-thought-out and something similar can be expected from the anime as well.

Since the ships featured in the game are basically anime girls with all kinds of naval equipment, there is also a school that upgrades them. So even in the anime, we can expect some good old high school tropes that will reflect more on the non-combat side of it. Now when it comes to the game, I personally believe that it’s a bit easier to pull off something as bizarre as ships humanized as anime girls, but for anime, executing this could be a bigger challenge.

For the most part of it, the game is exceptionally fun to play and offers some of the most interesting ideas that have ever been featured in modern RPGs. So naturally, even the expectations from the anime are quite high especially from those who have experienced the stellar art and gameplay of the source material. To know more about this upcoming gaming adaptation, move on to the next section.

Azur Lane Season 1 Release Date: When will it premiere?

‘Azur Lane’ was initially a side-scrolling shoot ’em up video game that was released for iOS and Android OS. Soon after its release in China and Japan, the game gained a lot of popularity and had more than 5 million users in Japan alone. It was also voted as the best game on Google play for that region in the year 2017. This is when anime director Motoki Tanaka, also known for his work in ‘Grisaia‘ and ‘Rewrite’, took the game’s success as a cue and decided to create an anime version of it.

With Jin Haganeya as its writer and Yasunori Nishiki as the music composer, Tensho’s Bibury Animation Studio took it upon itself to animate the gaming adaptation. It has been confirmed that Azur Lane Season 1 will premiere on October 3, 2019 and will have a total of 12 episodes.

You can watch the English dub and sub version of ‘Azur Lane’ season 1 on Funimation.

‘Azur Lane’ starts off with the appearance of a repulsive and freakishly strong enemy who is first sighted in the sea. But unfortunately, peaceful times were given away much before the appearance of this creature. So instead of uniting against the common enemy, all different forces turn hostile against one another wage civil wars. Meanwhile, the grotesque animal spreads havoc and easily gets away with it. ‘Azur Lane’ will follow the journey of several battleship girls who will have to learn to give up on their own personal conflicts in order to save themselves from a common enemy.

‘Azur Lane’ is going to be a naval warfare anime that will feature several different characters. But apart from all the attractive anime girls who will be featured in the show, several kinds of ships will also be a major part of its plot. As of now, we don’t know much about the details of the characters, so considering the setup of the game, we will be discussing all the ships that could be involved in it. Just like the game, these ships will probably be re-envisioned as the female characters.

Destroyers are the most powerful ships and also the best source of torpedo damage. The ships also move at unbelievable speeds and can be used for destroying the most powerful enemy forces with ease. SSR: Yuudachi and SR: Charles Ausburn are two of the strongest Destroyers in the game.

Light Cruisers are just well-balanced ships that come in handy when enemies become too tanky. Two of the strongest Light Cruisers in the series are SSR: Belfast and SR: Cleveland.

Though a little slower than Light Cruisers, these work really well against bulky ships and strong bosses. These can also cause heavy damage to enemies and have a lower rate of fire. Two of the best known Heavy Cruisers are SSR: Prinz Eugen and SR: Wichita.

Aircraft Carriers provide incredible air support and can be used for both, swarms of enemies and isolated targets. Also, it’s the role of air support to protect the ships from the attacks of enemy pilots by deleting all enemy air projectiles. Two of the best Aircraft Carriers featured in the series are SSR: Enterprise and SR: Saratoga.

Compared to the regular Aircraft Carriers, these are able to carry out strikes at a faster rate and but their frequency of attacks is relatively lower. Some well-known ships in this category are SR: Unicorn and R: Shouhou.

Battleships are the bulky frontiers of the fleet that have everything from speed to power to defense. These ships also have a very accurate aim but it takes a lot of resources to maintain these. SSR: Hood and SR: Queen Elizabeth are the two main Battleships in the series.

Repair ships are useless when it comes to attacking an enemy force but these play a crucial role in the recovery and healing of the rest of the fleet. Two of the most popular Repair ships are SSR: Akashi and SR: Vestal.