Back in the Game Season 1: Premiere Date, Cast, Recap, Update 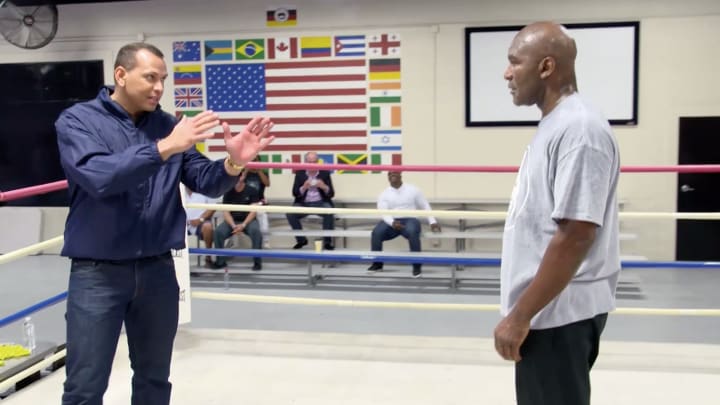 Professional athletes and entertainers make a lot of money. True that! Yes, they are some of the highest-paid professionals in the world. But here is the irony. Their careers are usually short-lived. Hence, if they don’t manage their finances well, they sometimes end up in a serious monetary disaster, especially after the cash stops coming in.

In ‘Back in the Game’, we witness how retired athletes and entertainers, who are going through a tough phase, take help from their mentor(s) and attempt to get back on their feet. Produced by Michael Strahan’s SMAC Productions and Amber Mazzola’s Machete Productions, ‘Back in the Game’ airs on CNBC.

Who’s the Host of Back in the Game?

‘Back in the Game’ features former MLB superstar and leading business magnate, Alex Rodriguez, as the host and mentor. The experienced ex-sportsman, who is no stranger to making comebacks in life, steps in to mentor, guide, and motivate fellow celebs Evander Holyfield, Ryan Lochte, Nicole Eggert, and Brian Dunkleman on how to manage their debts, rebuild reputations, and embark on a new professional path toward financial security.

What is Back in the Game About?

Each episode of ‘Back in the Game’ centers around one retired athlete, passing though a difficult financial phase. Mentor Alex Rodriguez steps in to offer a helping hand so as to flip their situation. However, it depends on the mentored individuals on how they make full use of Alex’s expertise.

The season begins with Alex partnering with entrepreneur, Marcus Lemonis. The duo joins hands in a mission to help former heavyweight champion Evander Holyfield to secure a better financial future. In the next episodes, we witness Alex guiding Olympic medalist Ryan Lochte, actress Nicole Eggert, and former ‘American Idol‘ host Brian Dunkleman, through their monetary crises. The featured individuals reveal how they had made huge mistakes, which ended up ruining their stability and status. Alex delves deep into their files and seeks the help of his talented team of experts to advise the stars to launch new “careers, repair reputations, build self-esteem and ultimately, get them back on path of financial stability. But after years of living large, will they be willing to listen to their new coach?”

‘Back in the Game’ might leave you wondering that what can you learn from these stars who used to earn in millions and then simply squandered away their wealth. However, there are a few financial lessons that we can actually learn from this show and apply to our real lives. In fact, the chances of us saving cash is more than a typical pro athlete. All it takes is the habit of not spending every penny that comes in.

For instance, athletes may make huge bucks but in the end, after retirement, they find themselves among the 80% of retired pro-athletes who are in deep financial trouble. So, what happens? Where does the money, that ranges in millions, go? In fact, the take home cash is pretty less than the total amount earned — with a majority of it going in taxes, and agent and management fees. So, yes, it does not matter how much you earn. Ending up broke is a habit and it does not always depend on how much is your paycheck. In short, “More spending equals little or no savings. A perfect recipe for financial disaster.”

And the good news is, Alex actually ends up giving real financial advice across the episodes. The show does not offer a quick solution to struggling, former professional athletes. It guides them toward achieving a financially secure life. As per Alex Rodriquez, “Our job is to teach them how to fish, not give them fish.”

To cut a long story short, if you wish to make smarter financial decisions, then you might want to check out the series. We would definitely hope that Alex brings in some more success stories in future seasons, where he narrates how athletes who could not become pros are motivated to launch their own empires. And we also expect that ‘Back in the Game’ shall help us in planning for a richer tomorrow. After all, retirement is inevitable. And we would all like to spend our golden years in the lap of security rather than being broke 24 hours!

Back in the Game Season 1 Release Date: When will it premiere?

‘Back in the Game’ season 1 premieres on CNBC on Wednesday, November 6, 2019, at 10pm ET. Its entire run for the first season consists of four episodes.

Back in the Game Trailer

You can watch the official trailer for season 1 of ‘Back in the Game’ right here.