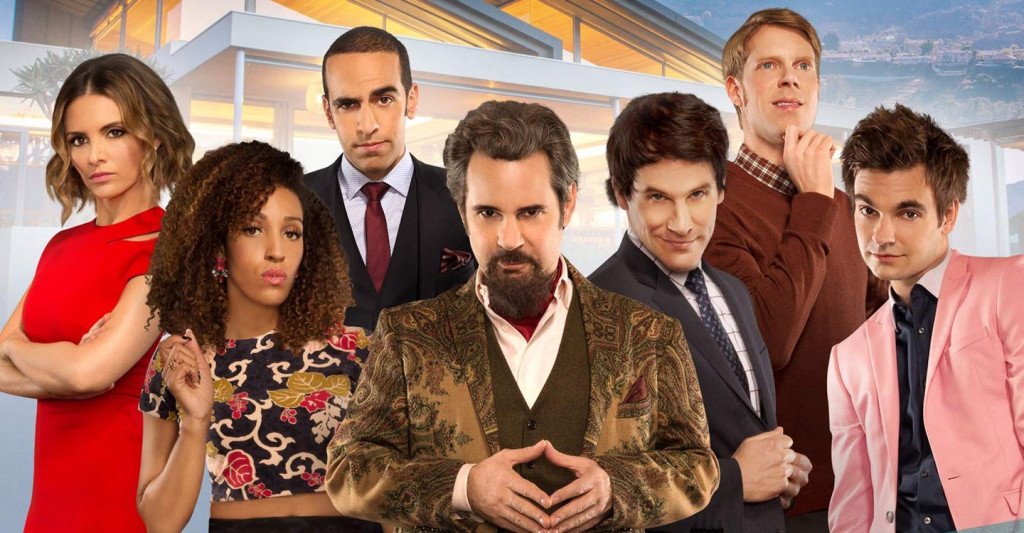 For all its worth and how much it affected how we perceive mass media, reality TV is certainly an easy punching bag for lampoon and satirization – so much so that it is sometimes hard to distinguish whether some shows are intended to be satire (take for example ‘I Want To Marry Harry’, a show that had unwary contestants rounded up to court a prince Harry lookalike). Bajillion Dollar Properties, however, makes short of its status as a parody. It is over-the-top, and at times bluntly put. Perhaps its crudity is also a part of its comedic approach, but the most important part is that it hits the hornet’s nest when it comes to mocking reality television. It first premiered on March 17, 2016, on Seeso and is available to stream on Amazon’s Prime Video.

Bajillion Dollar Properties Cast: Who is in it?

Considering the marketing that the show does, it would seem under-appreciated once one looks at the cast. Bajillion Dollar Properties is not exactly star-studded, but it has an incredibly strong cast. This is not to say that it lacks curb appeal for more casual sitcom watchers, however. The people you will notice right away masters of improv: Jason Matzoukas (Pimento from Brooklyn Nine-Nine) and Gillian Jacobs (Britta from Community) – but they are sadly only guest stars.

The main cast is nowhere nearly as legendary as the Community or B99 cast, but the acting is flawless, and it can be assumed that Bajillion Dollar will be a stepping stone to a better career with higher recognition for them. The nature of the show’s premise warrants that no one is really identified as a protagonist, and everyone gets roughly equal screen time. ‘Welcome to Howler’ starrer Dan Ahdoot plays Amir Yahgoob alongside Tim Baltz’s Glenn, while the more well-known duo, Ryan Gaul (Superstore, The Last OG) and Mandell Maughan (Me, Myself, and I) play Andrew and Victoria. The rest of the main cast includes Tawny Newsome, Drew Tarver, and Paul F. Tompkins. We will, in all likeliness, not be seeing the show’s popular guest stars with any certainty since their characters had been one-episode gigs – but the seven-actor main cast, along with most of the recurrent cast are all expected to return for the next season.

Bajillion Dollar Properties Plot: What is it about?

With the recovery of the real estate sector from the housing bubble crash in the late 2000s, the mouthpieces of it bounced back in a very different way: with the prominence of real estate moguls on the reality TV scene. Naturally, it was a match made in heaven – as HGTV’s milking of the formulaic house-hunting show format proves. Earwolf co-host Kulap Vilaysack’s target, however, is the infamous house-flipping genre where real estate moguls scout out stray buildings and turn them into profitable real estate. The easy way to accomplish this would have been to just mock their at times incredibly bland structure – but the show goes for a more complex approach with its premise. It is more of a 30 Rock framework, following an LA-based realtors firm, Platinum Realty.

The main cast, in a nutshell, is a bunch of eccentric realtors who must compete to be a partner of Platinum Reality by outselling their rivals with a greater number of properties. While the comedy is not exactly top-notch to a seasoned viewer, but the show certainly has its moments. Like 30 Rock, it relies a lot on improv. Unlike 30 Rock though, the board of writers is no Tina Fey, to be sure, but the show gets by just fine in terms of writing.

Bajillion Dollar Properties Season 5 Release Date: When will it premiere?

Bajillion Dollar Properties Season 4 premiered on August 5, 2019 and came to an end after eight episodes on August 8, 2019.

The show’s debut season had a positive reception – so much so that it received another season by the end of 2016. Although it was defunct for over two years since June 2017 (its third season), production for the fourth season started in 2019. The hitch in its airing was due to SeeSo, NBC’s comedy streaming service and its original network, shutting down in August 2017. The good news is that the show was finally picked up by Pluto TV, and is now up and running.

As far as the next season goes, we don’t have an official announcement yet. Though now that the show is officially on-air, it is a matter of time before another season arrives. If the show does get renewed, Bajillion Dollar Properties Season 5 can release sometime in October 2019. We will update this section as soon as we hear more.

The network hasn’t made any trailer available for just finished season 4, but you could always watch the trailer for the third season if you wanted a taste of the show – find it here.