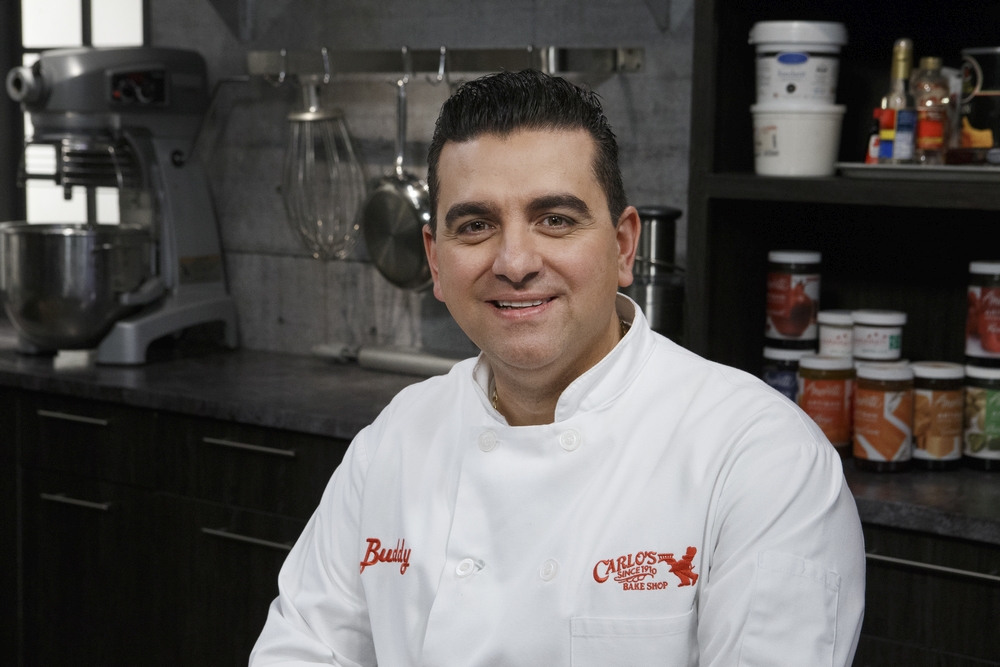 After delivering some of the most epic and popular shows, such as Bake it Like Buddy and Buddy Vs Duff for the food-loving audience, cake boss Buddy Valastro conceived yet another baking game show on Food Network called Bake You Rich. The show is produced by Cakehouse Media. The show’s first season premiered on April 14, 2019 on the Food Channel.

The reality TV show, hosted by Buddy, not only tests the cooking talent of its contestants, but also gauges their business skills. Four entrepreneurial pastry chefs compete with each other to win the competition and qualify, so as to be able to sell one of their favorite, customized creations to households all over the country via the website for Carlo’s Bakery.

Food shows are immensely popular. On some level it provides escapist entertainment to viewers who can vicariously enjoy the delicacies. Bake You Rich is slightly different in that it is as much a business show as it is a food game show.

Bake You Rich Cast: Who is in it?

Bake You Rich features one of the leading names in the baking industry, Buddy Valastro, as the host — who transformed his family-owned venture into an international empire. Now, he gives a chance to four professional baking chefs to become a household name in the country. Next, let’s meet the participants.

Nani Edry from Delray Beach, Florida, was previously employed in the tech industry, but now has embraced his passion for baking and converted it into his profession. He creates some of the most amazing doughnuts in his shop, Nani’s Dough. So, yes, his signature treats are his exotic doughnuts. Another contestant is Gerard Fioravanti from Huntington, New York. He owns Fiorello Dolce Patisserie and offers European-style patisserie as his specialty.  According to him, “Food critics have always said that we’re the best bakery on Long Island. Customers seem to agree.”

Cynthia Knox, who hails from Baltimore, is the third contestant. She is into simple baking and runs Cakes by Cynthia, whose signature dish is custom cakes. The final and fourth participant is Crystal Williams from Ridgewood, New York, who gains her inspiration, completely from her granny Norma. She owns and operates Norma’s Corner Shoppe and prepares comfort food from scratch.

Also, along with Valastro, the rotating panel of judges includes Chad Durkin, Erin McGinn, Vincent Tubito, and Valastro’s wife Lisa. They, in combination, make the decision about which dessert is best suited to generate the maximum sale on Carlo’s online marketplace.

Bake You Rich Plot: What is it about?

Introducing an interesting concept, this show focuses on professional bakers who are looking for a chance to get their signature product sold by Buddy. The format of this series comprises three challenging rounds, during which the contestants have to create innovative, delicious recipes. The rounds check both their baking and business skills and the panel of judges decides which treats will make it to the top. On each episode, one winning dish is available for sale at Carlo’s Bakery website, immediately after that particular episode concludes.

The first round tests the bakers on their ability to whip up their signature treats, which must also be aesthetically pleasing to the eye. Three dishes make it to the second round. Now, they craft another creative item which they think will be a hit in the bakery. Finally, in the third round, the last two participants  use the professional machinery at Carlo’s Bakery to mass produce their product.

As you can gauge, this competition is tough and the judges face a challenging situation while choosing the winner. The final decision considers the ability of the participants to face difficult obstacles like machine meltdowns, mass production portion control, and last-minute recipe changes. According to Food Network’s President, Courtney White, “‘Bake You Rich’ is unlike any other baking competition, showcasing all the elements that are required for a top-selling bakery item, beyond creating a delicious dessert. Buddy Valastro is the ultimate expert with decades of experience, and he brings his unique business savvy as the host and business partner for the lucky winners.”

Bake You Rich Season 2 Release Date: When will it premiere?

Bake You Rich Season 1 premiered on Food Network on Sunday, April 14, 2019. As far as the next season goes, we don’t have an official announcement yet. Though considering the uniqueness of the show, we would be surprised if it doesn’t get another season. Our best guess is that if the show does get renewed, Bake You Rich Season 2 can release sometime in April, 2020. We will update this section as soon as we hear more.

Food Network has not released any official trailer for the show. However, for the most recent updates, news, and clips, you can always visit their official site.