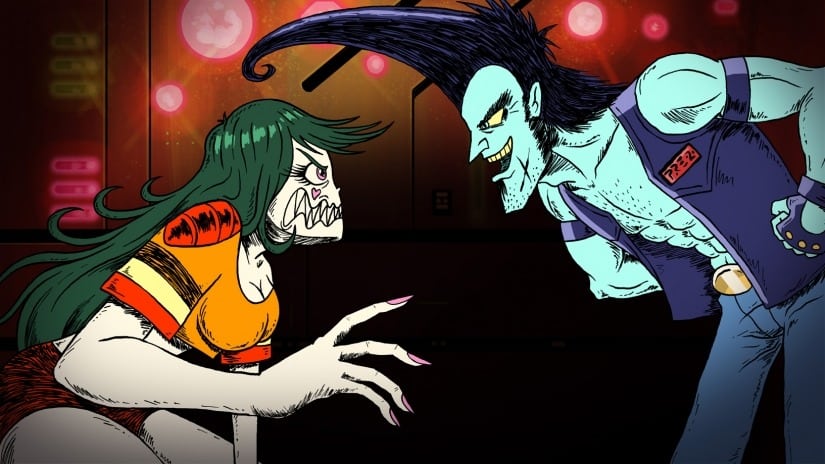 ‘Ballmastrz: 9009’ is an American adult animated comedy series that airs on the Adult Swim Network and first premiered on April 9, 2018. The series has been created and directed by Christy Karacas, best known for ‘Superjail!’.

Adult Swim is known to mix up their content to cater to adults who might like cartoons. Some of their most popular shows like ‘Rick and Morty‘, ‘Family Guy‘, and ‘The Jellies!‘ offer a brand of morbid and almost vulgar humor that is better suited for adults, while also tackling philosophical questions through their content. When it comes to ‘Ballmastrz: 9009’ you can throw all the philosophical content out of the window and exchange it for over-the-top craziness because that is what the show offers from the get-go.

The premise of the show is a basic redemptive arc of one of the greatest players of a lethal game. Set in a dystopic future, this player scandalously falls from grace and must now lead one of the worst teams in the game to a victory to redeem herself and prove her worth to a ruler, who is somewhat crazy.

After its launch, season 1 managed to garner favorable responses from viewers, prompting its renewal for a second season. Here’s all we know about ‘Ballmastrz: 9009’ season 3.

Ballmastrz: 9009 Season 3 Release Date: When will it premiere?

Ballmastrz: 9009 is a consistent performer for Adult Swim, attracting constant viewership numbers across its two seasons. Hence, we are positive that it will get another season. If renewed, Ballmastrz: 9009 season 3 should premiere sometime in February 2021.

The cast of ‘Ballmastrz: 9009’ includes Natasha Lyonne of ‘Orange is the New Black‘ and ‘Russian Doll‘ fame, as Gaz Digzy, a drunk, notorious party girl. Gaz starts off as a star player of the Boom Boom Boys, but with fame comes the thorns, and her drinking problem leads her to a downward spiral till she ends up with the worst team in the game. There too, her drinking hinders her, though she shows that she is very knowledgeable about how the game is played.

Jessica DiCicco voices Ace Ambling, the lead player of the team Leptons. DiCicco also features as Duleena- a bipolar girl of the team. When Gaz is forced to join the Leptons, Ace is in awe of her since Gaz has always been Ace’s idol, and this is something the former star later begins to appreciate.

Dana Snyder appears as Baby Ball, a mocking and crass member of the Leptons. Eric Bauza voices Flip Champion, a walking cut-off piece of a body having a sensor-deprived helmet with him. Flip is a true warrior.

Dave Willis voices Leto Otel, a very sluggish member of the Leptons, who always assumes the worst-case scenario in any situation. Christy Karacas voices Crayzar, the one who created the rules the new world has, along with the “The Game” to satisfy and please humanity. Karacas also voices Aboo Buvu, a game character who acts as a news reporter for ‘The Game’.

Apart from the above characters, two other characters are not voiced by anybody, but play a vital part in the series. Their names are Lulu and Bob. Lulu is a huge green-colored beast-like creature but is afraid of everything and Bob is a grey-colored alien who does not have any task to do, and his only forte is to receive the worst beating.

In the upcoming season, we are likely to see all the main characters return with Gaz warming up to her new team and deciding to become the captain of the Leptons. Maybe we will see some new faces as well, as the game becomes deadlier and more fun.

‘Ballmastrz: 9009’ follows Gaz Digzy, a superstar, party girl who is notorious, over the hill and no longer capable of doing things right after some destructive events that transpire. She used to be the captain of the Boom Boom Boys earlier, but her life quickly spiraled downwards when she destroyed it because of her boredom which affected her career big time.

She is moved down a lower level to the worst team called ‘The Leptons’, in ‘The Game’ due to her obscene language and drinking issues. Despite being drunk all the time, Gaz shocks everybody with all the knowledge she has about the game. She knows how to play in the best way possible and has amazing teamwork skills. ‘Ballmastrz: 9009’ features her journey to get to the top again by working hard to make this team of misfits win and give the losers a taste of victory.

As the title suggests, the show is set way in the future after much has been destroyed by the ‘Rad Wars’. Crayzar, who is now in charge, has brought peace, but to give an avenue to the bloodlust and thirst for violence, he has devised a sport called ‘The Game’ — conceptualized as a cross between ‘Mad Max‘ and Harry Potter’s Quidditch.

You have two teams who use the ball, a living creature, in order to score and win. However, during the course of the game, the opponents can be taken down or taken out in truly brutal styles. Of course, arrangements are made so that no one dies, but it is gory all the same. The crowd’s chants encompass the game’s spirit: “Use the ball to kill! Use the ball to score! Thanks to the game, there’s no more war!”.

Hopefully, in the upcoming season, we will see more of this violence, and bloodshed, as the character arcs unfurl and give us more insight into the motivations of the major players of ‘The Game’.