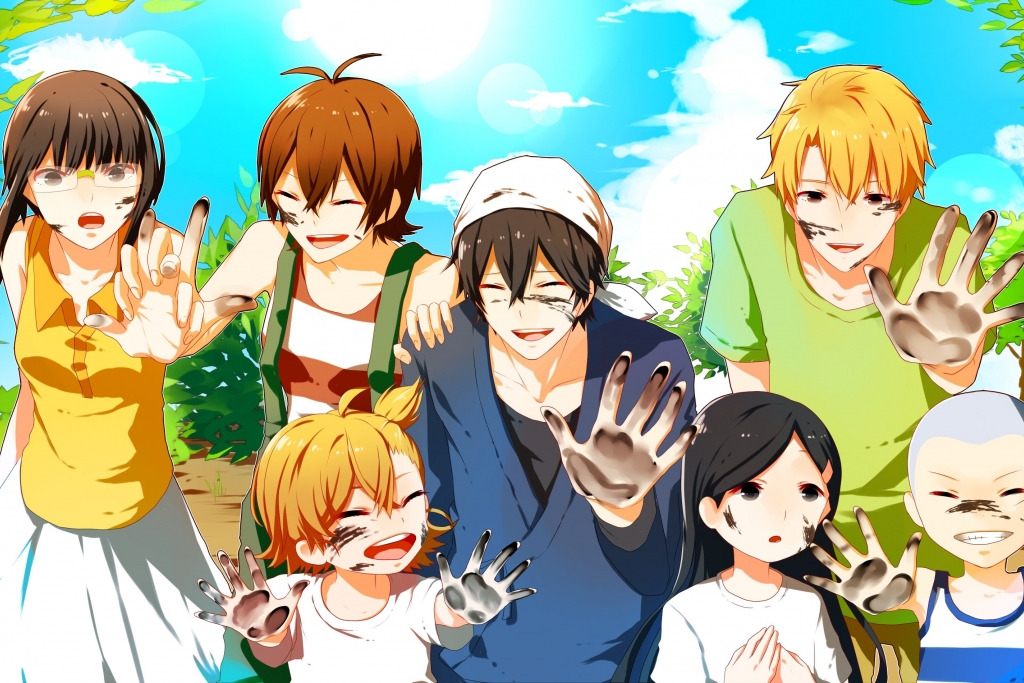 ‘Barakamon’ is a Japanese manga series written and illustrated by Satsuki Yoshino, which follows the adventures of Seishu Handa, a professional calligrapher. The series first began circulating on the February 2009 issue of ‘Gangan Online’, a popular magazine published by Square Enix. The first volume was published on the July 22, 2009 and a total of 18 tankōbon volumes have been published as of December 2018. The series is licensed by Yen Press in North America, who released the first volume on the October 28, 2014.

A spin-off manga series titled Handa-Kun’ was released in November, 2013, which serves as a prequel to the original manga. Some consider it to be a spiritual predecessor, since it’s set in a time period before that of the first season. It is also written and illustrated by Satsuki Yoshino and is similar to the original manga that was published by Square Enix but on their ‘Monthly Shonen Gangan’ magazine. A total of four tankōbon volumes have been released till date with the first one being released on the June 21, 2014.

The anime adaptation is produced by Kinema Citrus and began airing on the July 5, 2014. A total of 12 episodes were produced, with the latest one being aired on the September 27, 2014. The spin-off manga series also received an anime adaptation of its own, directed by Yoshitaka Koyama. The series is produced by Diomedéa with scripts being provided by Michiko Yokote, Mariko Kunisawa, and Miharu Hirami. The characters are designed by Mayuko Matsumoto and the music is composed by Kenji Kawai. Funimation holds the rights to the series and has since then broadcasted it on various channels in addition to releasing home video versions of the same.

Barakamon Season 2 Release Date: When will it premiere?

‘Barakamon’ season 1 premiered on July 6, 2014 and ended its run on September 28, 2014. As far as the next season goes, it’s highly unlikely that we will get a direct sequel to ‘Barakamon’, mainly due to the fact that the developers have shown interest in spin-off series rather than sequels. In addition, all of the source material has already been adapted into the anime format, so if Satsuki Yoshino doesn’t produce more material, then it’s highly unlikely that a new original season for ‘Barakamon’ will be released. At this point, ‘Barakamon’ season 2 release date of 2021 or 2022 seems like a distant dream. We will update this section as soon as we learn more.

Still, some consider the spin-off series to be somewhat of a predecessor (or a successor) to the original anime. However, this is a matter of debate and we recommend that you treat both the adaptations separately. Since they cover two different time-periods with the latter highlighting the events that came before the original, some might even suggest that you watch the spin-off first before watching the original but we recommend against it. Some of the characters are introduced in the spin-off with the expectation that one has seen the original; so it’s always better to watch that first.

The English dub of ‘Barakamon’ is available on Funimation and Amazon Prime. You can also stream it on Crunchyroll with its original Japanese audio and English subtitles.

The plot of Barakamon follows the story of Seishu Handa, a professional calligrapher and an extremely cheerful person who is sent away by his mother for being too harsh on a curator who criticized his work. Although he is quite calm and helpful towards others, Seishu couldn’t hold his anger when a curator called his work unoriginal and bland. He then explodes with anger and ends up punching the guy. However, his mother is furious with him and sends him away to a far off village that is located on an island and almost cut off from the world. Her idea is that her son will be able to better focus on his art given the peaceful nature of the location, instead of lashing out at others. Seishu respects his mother’s decision and then packs his bags and leaves.

Upon reaching the island, Seishu finds himself quite unfamiliar with village life, since he was raised in a big city like Tokyo. Now, he finds himself in a strange village near Kyushu where people talk in strange accents. In addition to that, he finds his house containing the bare minimum of amenities, which is a stark contrast to his flashy modern lifestyle. As he proceeds to get the feel of the place and try to grip his surroundings, he is visited by a young girl called Naru, who decides to make it her point to pester him and make his life miserable. Perplexed and fatigued, he finally asks a few neighbors to help him move all of his belongings to the house; these are the first signs of interaction between the two parties.

Despite Naru trying her best to pester and irritate him, Seishu finds her to be quite friendly in general and the two develop a special bond. Naru proceeds to introduce him to some of her middle school friends, namely Miwa and Tamako, hoping that he at least would have some company around. However, as they leave for school, Seishu starts working while pondering over the incidents that have taken place over the last few days. Not realizing how much effort he is putting into his work, he nearly fatigues himself to death and is eventually discovered by Hiroshi who was making his way over to him to provide him with lunch that his mother made.

Upon finding Seishu in that situation, Hiroshi proceeds to check out some of his work and gets inspired in the process. Seishu finds peace and solace in being able to connect with the children and then gets back to his work. However, he is discovered unconscious and fatigued the day after by Naru, who quickly admits him to the local hospital. Most of the people in the village have taken a liking to Seishu by now and many are seen visiting him at the hospital while he was recovering. While spending his time at the hospital, he comes in contact with another sick elderly patient with whom he strikes a deep conversation. He then asks others about the identity of this patient. They tell him that there were no other patients in the hospital other than him since he was the only one under care. He finds this extremely mysterious but decides not to think about it as he makes his way back to his home.

The anime goes on to portray the development of the characters as they begin to interact and trust each other. It also shows the importance of friendship and the role it plays in perilous times, while highlighting the sanctity of a true and hardworking mind. It shows how one is able to overcome their fears and insecurities just by putting in a bit more effort, and how much that extra stretch matters in real life. It is the quintessential example of friendship triumphing over rage, anger and ultimately hate, and the belief that one has the potential to get rid of each one of them.

Seishu Handa: The main protagonist of the story and a professional calligrapher, Seishu is sent far away from his city life in Tokyo due to him losing his cool over a simple issue. A curator happens to visit his professional exhibition and calls his art mediocre and bland at best. Unable to take his criticism, he punches him in the face. His mother gets furious with him and decides to send him away to a village town near Kyushu. Here, he is forced to make do with the basic amenities that are present at his primitive residence while putting up with his neighbors. He does manage to connect with them and the anime goes on to show his interactions with them.

Naru Kotoishi: Naru is the 7-year-old child who happens to be the neighbor of Seishu when he moves to his new life in the village town. She irritates him to the best of her abilities but eventually develops a very strong bond with him. She is an extremely energetic and curious child who sometimes lands herself in trouble due to these qualities. However, her brightness makes up for this and it manages to get her out of trouble most of the times.