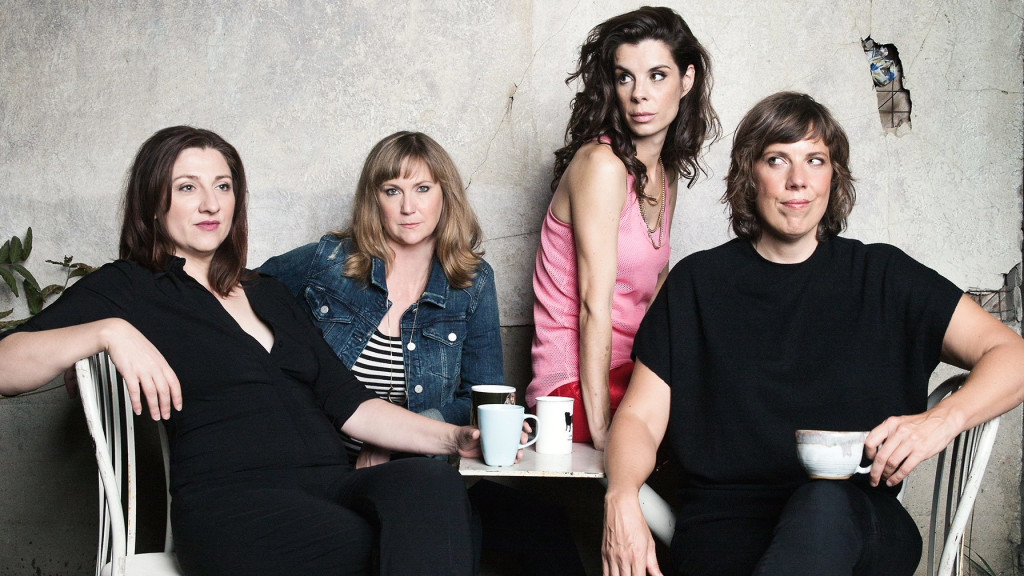 ‘Baroness Von Sketch Show’ is a sketch comedy which has a decidedly female perspective. It is written by a staff that is primarily female and is performed by an all-female primary cast (with both female and male supporting players). They tackle a variety of subjects, most of it dealing with current cultural topics of everyday life, but from a female point of view. Unlike most sketch comedy shows of today, the sketches in this show are in a rapid-fire mode, insofar that they are relatively short – none lasting more than approximately five minutes, with most being in the one to two minute range – and are filmed largely on location, rather than on a sound stage or in a studio in front a live audience.

The show has been created by Carolyn Taylor, Meredith Macneill, Aurora Browne, and Jennifer Whalen. The directors are Aleysa Young, Yael Staav, Jordan Canning, and Jeremy Lalonde. It airs on CBC in Canada, and on IFC in the USA, and first premiered on June 14, 2016. IFC has described the show, saying, “Fast-paced and irreverent, the female-driven sketch comedy series celebrates the absurd and mines the embarrassing, offering a fresh, witty take on relatable moments such as crying at work, waiting in airport security lines, dealing with gossip-obsessed co-workers, co-parenting and more.”

Baroness Von Sketch Show Cast: Who is in it?

The main cast members of the show are its creators, Carolyn Taylor, Meredith Macneill, Aurora Browne, and Jennifer Whalen, who star in various roles in different sketches. All the other supporting actors are not regulars and the show features different actors in almost every sketch. It is an interesting take on various aspects of life with a touch of comedy to it.

In season 4, we definitely can attest that the creators will be back playing various sketches, and they are likely to be joined by a host of new faces. However, we have to wait and find out what they have in store for us.

What is Baroness Von Sketch Show About?

The ‘Baroness Von Sketch Show’ tackles various subjects, most of them dealing with current cultural topics of everyday life, but from a woman’s perspective. Some of the most hilarious and eye-popping sketches were aired as part of Season 3. The sketches included getting your bangs wrong, sports awards, sporting lashes, using dry shampoo, etc among other weird topics.

The show mainly revolves around Carolyn Taylor, Meredith MacNeill, Aurora Browne and Jennifer Whalen who impart a comedic spin to the evident narcissism in our culture. Things as simple as ordering a coffee to complex things such as open relationships and discussions on politics form the plot of the show.

‘Baroness Von Sketch Show’ has been growing popular as a result of its opinionated all-female cast and because it focuses on the many simple and complex things that form a part of our lives. In fact, this show might be a little too advanced for viewers unless you have a finely attuned sense of humor. The writers can make fun of LinkedIn applications and female reading groups, but underneath it, is a nuance. For example, they slightly tease the ideas of radical feminism but you know that they have read their Judith Butler because the skewering is deliberate. Nonetheless, the choppy dialogue makes it fun even if you cannot follow all of what is going on here.

Talking about season 4, an IFC executive said, “Three years ago, we fell in love with the brilliant, inspired and ‘slightly off’ point of view that embodies ‘Baroness von Sketch Show’, and we have never looked at red wine, healthy salads, workplace politics and dry shampoo the same way since. Truly, it is the only sketch show to be created, written and directed by women and star four female leads. Their insane brand of comedy, while appealing to absolutely everyone, has a particularly resonant tone right now. We are thrilled Carolyn, Meredith, Aurora, and Jennifer will be returning to IFC for a fourth season in 2019″.

If you are tired of how drab ‘Saturday Night Live‘ is becoming, or how some of the jokes tend to meander and lose their impact, then this is the series that you should be tuning into and devouring voraciously.

‘Baroness Von Sketch Show’ Season 3 premiered on CBC on September 18, 2018. It’s been confirmed that the series will come back for another season, and in fact, the news came before the third season had premiered. “We are so proud to be home to Baroness von Sketch Show,” said Sally Catto, general manager, programming, CBC. “It’s intelligent, insightful and ridiculously funny and I look forward to seeing what the brilliant Baronesses have in store for Season 4.”

The fourth season premiered on CBC on September 17, 2019.

‘Baroness Von Sketch Show’ Season 4 will release on October 30, 2019 on IFC for the US Audience. What we also know is that the show has been renewed for a fifth season. It is rare that a show is renewed for two seasons in advance. It obviously reveals the confidence that the network has on Meredith Macneill and her team.

Here’s a clip from ‘Baroness Von Sketch Show’ to get you excited for the next season.