When Does Battle of the Fittest Couples Start on Paramount? 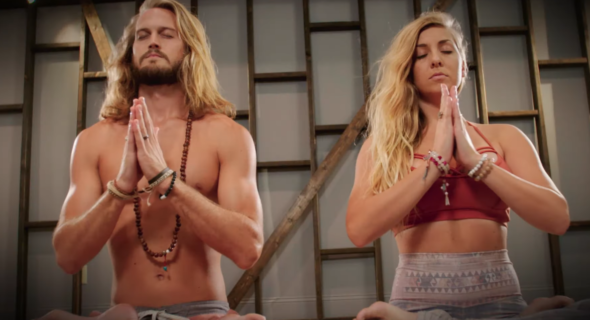 ‘Battle of the Fittest Couples’, as the name suggests, is a competition series that pits ripped ‘swolemates’ against other couples. The intense challenges thrown at the contestants not only test their physical and mental prowess but also examine their teamwork.

The reality tv show airs on Viacom Media owned Paramount Network and is produced by 51 Minds Production. Christian Sarabia, Nicole Elliott, Keith Geller, and Steve Kaufman are credited as the executive producers for the series. It is yet another addition to the platform’s roster of unscripted series which also includes ‘Wife Swap‘, ‘Ink Master‘, ‘Ink Master: Grudge Match‘, ‘Bar Rescue‘, ‘Marriage Rescue’, and ‘Lip Sync Battle’.

Battle of the Fittest Couples Cast

‘Battle of the Fittest Couples’ is hosted by the real-life couple, JoJo Fletcher and Jordan Rodgers. You might already know Fletcher from ‘The Bachelorette‘ where she was the lead star in the 12th season. Currently, she is a real estate developer as well as a television personality. According to Fletcher when asked about her role on Fittest Couples, “We are so excited to be hosting, Battle of the Fittest Couples! We love working out as a couple, through doing so, we have learned so much about each other, and it has strengthened our relationship.” Her husband Rodgers, a former NFL quarterback, added: “Not only is this a physical competition, but it’s about the partnership and our goal is to have every couple leave this competition stronger both emotionally and physically.”

Apart from the hosts, the show features 12 couples who are into intense fitness and rigorous workout regimes. They are ‘Heaven and Michael’ (The Muscle) from Charlotte, NC; Christina and Andy (The God Squad) from Fort Lauderdale, FL; Talya and Blake (The Georgia Peaches) from Dalton, GA; Christina and Jaret (The Track Stars) from Mechanicsburg, PA; Jessika and Robbie (The Private Trainers) from Maui, HI; Shay and Kyle (The Crossfitters) from Sacramento, CA; Nicole and Tony (The Young Guns) from Casselberry, FL; Erin and Jordan (The Schemers) from Columbus, OH; Christie and Josh (Tall and Small) from Tampa, FL; Ryann and Tyler (The Fitness Models) from Los Angeles, CA; Ashley and Mathew (The Yogis) from Pahoa, HI; and Kathy and Luther (The Celebrity Trainers) from Windermere, FL.

What is Battle of the Fittest Couples About?

In this competition series, 12 of the most athletic, fittest, and competitive couples face multiple rounds of tough, challenging, and grueling tasks that are especially curated to test both their physical and mental strength. Each week’s episode features several rounds of tasks, with the winning couple getting an option to choose another couple who would accompany them to the “Rage Cage. The losing couple is automatically eliminated and is sent back home.  In the Rage Cage round, the rivals engage in the ultimate face-off brawl, after which one team stays and the other pair is asked to leave the show.

Through every episode, physical limits are pushed, alliances are made, and relationships are tested. In the finale, the one couple who passes all the tests is declared as the winner and is crowned the ‘Fittest Couple’. The pair also gets the chance to pocket a grand cash prize of $100,000.

‘Battle of the Fittest Couples’ is designed as the ultimate relationship test. After all, as the saying goes, “The couple that sweats together, stays together’. The featured pairs across the series should not only complement each other’s strengths but must use exercise as a tool to make their relationships even stronger. Each person is different and each has his/her own specialties and preferences. But the couple who knows how to work in complete harmony is the one that can make it to the finale. The pair that demonstrates the perfect amalgamation of mutual support, endurance, athletism, trust, and honest communication makes it to the end and is declared as the nation’s ‘Fittest Couple’.

Battle of the Fittest Couples Season 1 Release Date: When will it premiere?

‘Battle of the Fittest Couples’ season 1 premieres on October 15, 2019, at 11:00 p.m. ET/PT on Paramount Network. In case, you are a fitness freak or like to take care of your body, you wouldn’t want to miss this show.

Battle of the Fittest Couples Trailer:

You can watch the official trailer for ‘Battle of the Fittest Couples’ season 1 below. You can also head to their official website if you wish to check out clips and images from the show.