When Will Battlebots Season 5 Release on Discovery? 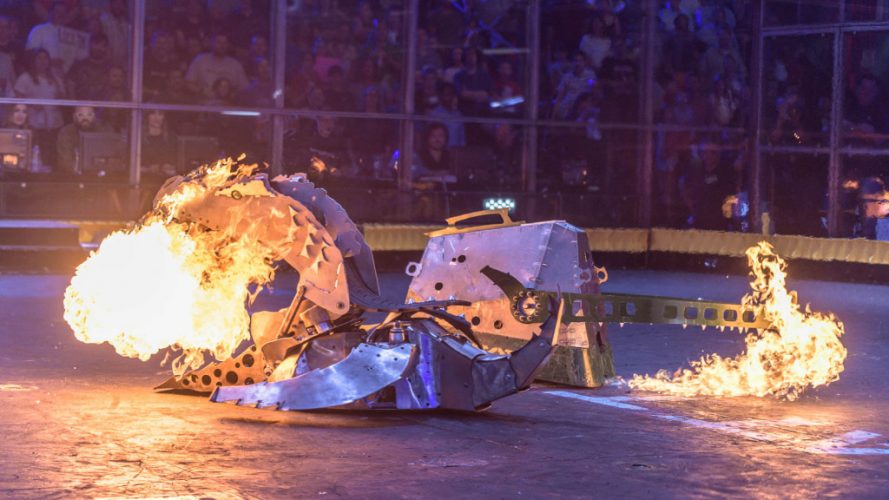 Watching robot combats is extremely satisfying and there is something insanely cool about it. We love watching mega brawls and in robot matches, since there is no actual loss of human life, the fights can be brutal and are reminiscent of the fighting pits in older days when gladiators would sally forth and fight unto death for entertainment. Anyhow, even now, in movies like ‘Pacific Rim‘ and ‘Transformers‘, our love for robot battles become apparent, and ‘Battlebots’ delivers just that. This robot competition series is pure and unadulterated entertainment that has managed to draw a solid fan following over its run.

The series initially aired on Comedy Central when it first premiered on August 23, 2000. ‘Battlebots’, even though it became a hit on Comedy Central, did not run for more than two years (although becoming a prolific show, it was already on its fifth season). After more than a decade of absence, ABC adopted and rebooted the show in 2015 – only to drop it in 2017, and now it has done the rounds to play itself into the hands of Discovery and Science Channel, who acquired the license and syndication in 2018. This edgy idea has been created by Greg Munson and Edward P. Roski (Trey).

‘Battlebots’, after spanning nine remarkable seasons, is now all geared up to release its 10th outing. Here’s when ‘Battlebots’ season 10 will release on Discovery.

Battlebots Season 10 Release Date: When Will it Premiere?

In February 2020, Discovery announced that the show was renewed for another season. The channel revealed further details in its press release, which said: “The epic, robot-fighting series BattleBots returns bigger than ever before – with an unprecedented 50 hours of programming on Discovery. Competitors from around the world will face off to prove who is the ultimate robot-building genius.”

Throughout the years, ‘Battlebots’, has swapped numerous times between different networks, executive producers, and directors – and the same applies for the narrators (or casters, as it were) and especially the hosts. Once upon a time, ‘Battlebots’ used to have a throng of celebrities selling it – the original Comedy Central run had Bill Nye, the science guy as its technical expert and famous figures like Heidi Mark as hosts.

However, the rebooted version has not shown much star power in that department – which is not to say that it does not have its fair share of a distinguished and famous cast. Season 9 of the show features NFL caster Chris Rose and former UFC fighter, Kenny Florian, as the hosts. Faruq Tauheed is the arena announcer while Jenny Taft is the pit reporter. Bite Force was the winner for season 9.

Season 10 sees the return of Chris Rose, Kenny Florian, and Faruq Tauheed, joined by the Bot Whisperer, Peter Abrahamson. 60 teams will battle it out for the championship. The robots featured in the episodes include custom-made weaponry such as metal-scorching flamethrowers, hydraulic flippers, and spinning blades (with speeds over 200 mph.) There are also robots that can walk on legs and feature novel designs with extremely durable constructions. Bite Force also makes a comeback with other fan-favorites like Tombstone, Witch Doctor, Death Roll, Lock-Jaw, and SawBlaze.

Alongside the robots, we see the builders behind them. Each robot is homemade and created from a variety of materials. The participating teams range from families to university students.

What Can Battlebots Season 10 be About?

The show, ‘Battlebots’, features no-frills minuscule armored robots that are created and remote-controlled by the contestants and pits these bots into the bulletproof fighting arena for a one-on-one deathmatch. The protocol of robot combat has them distributed by weight categories. These include lightweight – 60 pounds (27 kilograms), middleweight – 120 pounds (54 kilograms), heavyweight – 220 pounds (100 kilograms), and superheavyweight – 340 pounds (154 kilograms). Like ordinary fight rules, robots of the same weight category go up against one another.

The matches themselves last for 3 minutes each and both the robots try their best to destroy the opponent by any means at hand. Humans are in no way allowed to enter the stage, except for two conditions, either the robots have to be on fire, or both robots have to be tangled or simultaneously stop working. If one robot gets tangled and stops working somehow, it is declared as a knockout. If, after 3 minutes, neither robot is out, then the judges allocate points and declare the winner.

While the robot brawl is a major attraction of the show, those interested in science and technology might also want to tune in to see how the show goes about displaying bots with cutting edge technology.

Season 10 has been dubbed as “the largest international field” in the show’s 20-year history by Discovery. 60 teams will partake to win The Giant Nut. Each battle will have two remote-controlled robots competing in a three-minute round. As explained by Chris Cowan, executive producer, Whalerock Industries, in Discovery’s press release: “For our fans, there are two times of the year: Robot Fighting Season, and waiting for Robot Fighting Season. We couldn’t be prouder that our partner Discovery has dramatically increased our programming block to satisfy our legions of dedicated fans. The quest to crown this year’s most dominant combat robot is on!”

Check out the sneak peek for season 10 below: