Below Deck S7 E17: Everything We Know 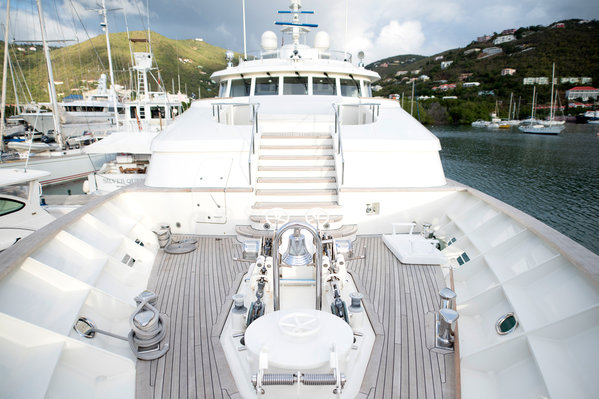 The high-seas reality series, ‘Below Deck’ has reached its peak when it comes to drama among its constantly bickering crew members. Currently, in its seventh season, while cruising the seas of Thailand on the Valor, this week’s episode depicts a scenario when the guys-vs-girls syndrome has stretched to an all-time high. Now if you are one among those many ‘Below Deck addicts’ who are just done with the last episode, we bet you are all excited to know the wheres and whens of episode 17. Well, why the second thoughts? Read on.

Below Deck Season 7 Episode 17 Release Date: When Will It Premiere?

The preview describes the episode as “Captain Lee calls an all-staff meeting to address the previous night’s debauchery and gives the crew an ultimatum. Brian refuses to apologize for his behavior at the night market and tells Courtney he is “fed up,” causing their relationship to be in turmoil once again. Kate’s patience is tested when the primary for Charter 9, Jemele Hill, a former sports journalist for ESPN, wants the charter ran her way.”

The description further reads: “Kevin and Kate butt heads during preparations for their final beach picnic, and when Kate takes matters into her own hands, she seeks out revenge on Kevin by any means necessary. Kevin takes great pride in making a penis cake for the primary’s bachelorette party. Kate seizes an opportunity to strike revenge on an old foe.”

You can also catch a sneak peek of the upcoming episode here.

Where to Watch Below Deck Season 7 Episode 17 Online?

Other live-streaming options include Fubo TV and YouTube TV. You can live-stream the series on your digital devices, such as a computer, phone, Roku, Fire TV, Apple TV or another streaming device with one of the aforementioned services.

Episodes are additionally available for purchase on Amazon Prime Video. You can also catch the seasons on Hulu (Bravo) or PlayStation Vue.

In ‘The Scorpion Queen’, Tanner asks Kate if they can have another hook-up in her bunk. It is also revealed that Brian and Courtney have not had sex. On the other hand, Simone has her own frustrations about Kate and Tanner’s romance. She had earlier been involved with Tanner and confides to Ashton that she regrets her decision. Meanwhile, Courtney attempts to reconcile with Brian.

Rhylee and Tanner prepare for their jobs with Rhylee wanting to tackle the exterior first. Tanner rebuffs her suggestion. Kevin and Kate get into an argument over the choice of dinnerware at the guests’ table while Simone breaks a glass, only to be taunted by Kate.

The following morning, the crew is all hassled because of the insane amounts of eggs ordered by the guests for their breakfast. But ultimately, they depart satisfied. The team gathers for lunch but Rhylee, who is the last to take her plate, is left alone to sit on her cabin floor and have her food.

During the tip meeting, Rhylee is the one to reach first as she wants a seat. Captain Lee gives her $1500 as a tip and after appreciating her, informs the crew that a hectic day lies in wait for them tomorrow. With the team on their smoke breaks, Rhylee and Ashton again indulge in some petty banter.

The last charter guests for the season arrive — Jemele Hill and her girlfriends who land onboard for a bachelorette party. Kevin asks Tanner about Kate while the girls, leaving Simone, attempt scorpion at Rhylee’s suggestion. After returning back to the yacht, Ashton starts bullying Rhylee again and she finally breaks down, calling him a misogynist pig. This leads Courtney to chide Brian who, in turn, lashes out at her.

Before bedtime, the guys get busy drinking while the ladies sulk and are in tears. This compels captain Lee to come down and order everyone back to their beds.