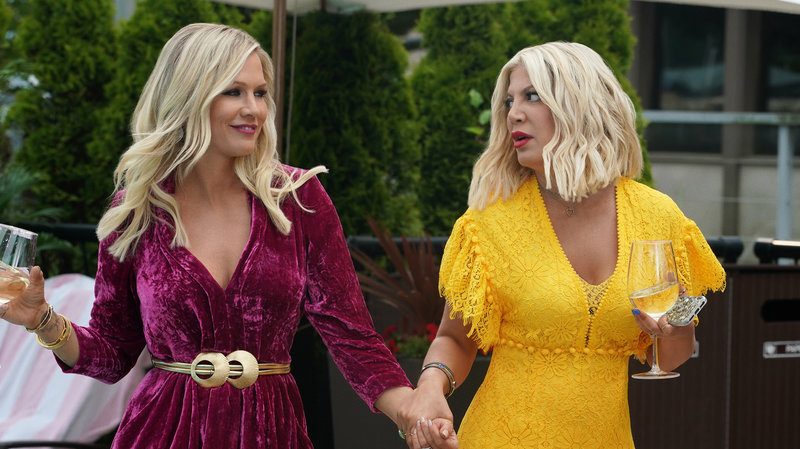 For the fans of the phenomenal ’90s drama, ‘Beverly Hills’, the announcement of ‘BH90210’ came as a pleasant surprise. The OGs are back, after all! The comedy-drama television series, officially branded as the sixth installment of the popular 90210 franchise, is developed by Mike Chessler, Chris Alberghini, Tori Spelling, and Jennie Garth.

‘BH90210’ season 1 premiered on Fox on Wednesday, August 7, 2019 and came to an end after six episodes on September 11, 2019. The unique concept of the show does offer loads of promises. This “untraditional take on a reboot with some of the original cast” may not be what we expect from a revival, but it does bring in a whiff of the 90s nostalgia. So, for diehard fans of the franchise, the show turned out to be a golden opportunity to bring back memories from a series that had defined their childhood!

As far as next season goes, there is bad news for the fans. Fox has announced that the show will not come back for season 2.  So for all practical purposes ‘BH90210’ season 2 is canceled.

The lead cast of ‘BH90210’ comprises most of the main actors from the original title. However, here, they play fictionalized versions of themselves — inspired by actual incidents from their real lives. We meet Gabrielle Carteris as herself (Andrea Zuckerman in the original series), Shannen Doherty as herself (Brenda Walsh from the parent title), and Jennie Garth as herself (who portrayed Kelly Taylor in the original show). Joining them are Brian Austin Green, Jason Priestley, Tori Spelling, and Ian Ziering, all playing themselves.

Since the debut of ‘Beverly Hills: 90210‘ in 1990, we have witnessed multiple reboots and spin-offs that have kept the spirit of the show alive. But most of the titles are focused on building up on and recirculating the same content. The approach for ‘BH90210’ is, however, a tad different. It is not entirely about the gang coming back together and getting on with the series. The story, in fact, follows the lead roster of cast members in the tweaked versions of their actual selves — inspired by their real lives and relationships. Yes, the zip code may be the same, but the premise adopts a fresh concept.

After the original series ended, Shannen, Jason, Jennie, Ian, Gabrielle, Brian, and Tori had each separated and gone their own ways. On ‘BV90210’, they get together for a reunion — with the aim to get a reboot up and running. The cast decides to reconnect and start afresh from where they left off. But revived old flames, friends, and frenemies soon feature in the picture to cause more havoc and drama.

The series begins with the cast coming together for a 30th-anniversary reunion in Las Vegas. Tori Spelling pitches in the idea of a ‘90210’ reboot because her reality show is over and she is in urgent need of cash. On the other hand, others from the gang are also dealing with their own problems, challenges, and crises. Each character’s story has a hint of real-life ingredients. For instance, Gabrielle Carteris is actually the elected president of the Screen Actors Guild. In the show, she is depicted to run the Actors Guild of America. Again, Brian Austin Green who plays himself, in reality, is married to Megan Fox. But on the series, he is given a slightly different intro. Green is in wedlock with an R&B superstar named Shay (portrayed by Power‘s La La Anthony). So, you get it right? The plot gathers its inspiration from actual events — but in the form of their exaggerated counterparts.