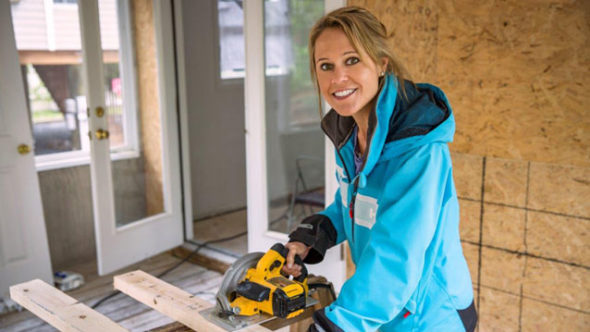 ‘Big Beach Builds’ is a reality television series directed by Mike Stafford. The show first premiered on March 20, 2017, on DIY Network. The show features Marnie Oursler, an American home-builder, who renovates old beach houses and converts them into something modern and beautiful.

People love to live by the oceans. It is away from the maddening chaos of the city and gives a soothing peace, like nowhere else. In fact, life becomes calmer when you are surrounded by the serenity of sandy beaches and blue water. These are the few reasons why people love to rent beach houses for vacations. But, if you have to permanently live by the water in a beach house, your life automatically becomes rather different from that of the others.

A lot of people want a change of lifestyle and the luxury a beach house provides. This is what ‘Big Beach Builds’ guarantees you – beautiful and modern beach houses, in your budget, and as per your demands.

Over the last two seasons, ‘Big Beach Builds’ has become well-liked by fans, who are now wondering about whether they will get to see Season 3. We delve into that after sharing the show’s details.

Who is Marnie Oursler?

Marnie Oursler is the host of the show and belongs to a family of builders. She bought her first beach house right after her graduation. She spent her entire savings to buy the house and realized she had nothing left for its renovation.

Low on cash, Marnie decided to use her own skills, that she had garnered over the years from her family, and renovate the house herself. She later sold the house at an impressive price with a lot of profit. With the earned money, she built another house for herself and sold it a few years later to build another.

This pattern made her realize that her talent to build and renovate beach houses could help a lot of people. In the series, she renovates dated house with her modern techniques.

Big Beach Builds Plot: What is it about?

The season starts with Marnie renovating a beautiful cottage, a few blocks away from the beach, which needs immediate attention. The cottage needs to be elevated at least 20 feet in the air and Marnie starts the drill to rectify the unsafe structure.

In the following episodes, Marnie renovates a 60-year-old house, rectifies the structural flaws of a house, converts a regular yard into a flood-proof one, and creates extra spaces in some houses for growing families. She also renovates old kitchens of many beach houses into something modern and spacious.

The season mainly focuses on Marnie giving a new touch of modernity to the otherwise outdated designs of the beach houses. At the same time, she makes sure that the renovations do not hamper the original rustic feel of the place, which in fact, is the real charm of the house.

Big Beach Builds Season 3 Release Date: When will it premiere?

‘Big Beach Builds’ Season 2 premiered on April 9, 2018, on DIY Network. The season was spread across 8 episodes and the last episode released on May 21, 2018. There has been no announcement of its renewal as of yet.

Given the fact that the concept of renovating beach houses is not so common on television screens, and the general feedback of viewers of the show is positive, we assume that the show getting canceled is highly unlikely. The series might be taking some time, and probably ‘Big Beach Builds’ Season 3 will release sometime in April 2020.

We expect Marnie to return to the show with more beautiful beach houses and loving families. The audience can also expect more innovative renovations and more difficult house conditions in Season 3.

We all love beautiful houses with beautiful views. They are not just great aesthetically but also impact our moods in a positive way. The show is for people who appreciate good real estate. We suggest you stream the show as it can prove to be your perfect binge-watch.

You can catch a clip of Marnie designing her own beach house below, which will give you a fair idea of the show.