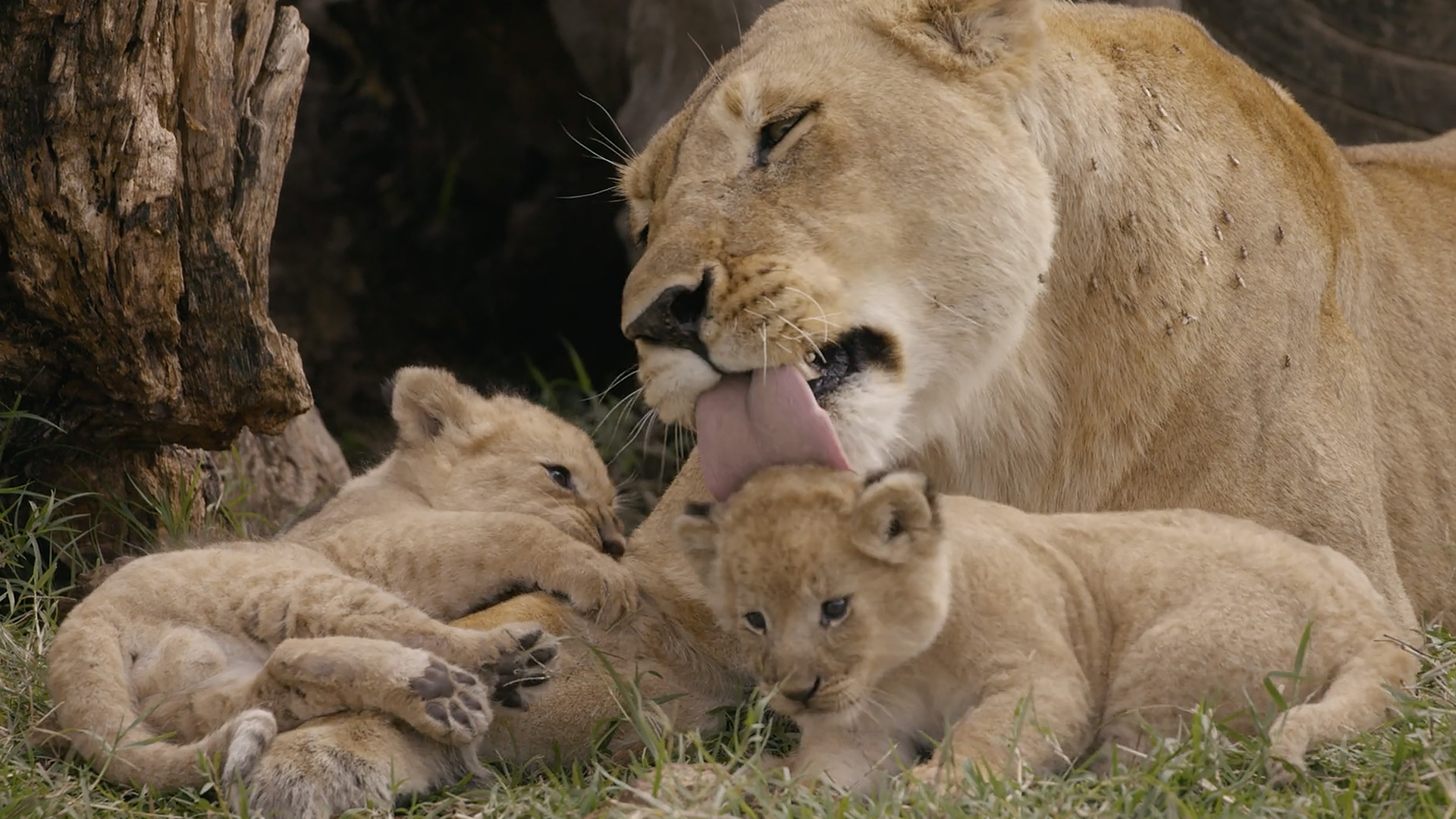 ‘Big Cat Tales’ is a documentary series that airs on Animal Planet and follows the current lives of lions, leopards and cheetahs at the Kenyan Wildlife conservation area of Masai Mara National Reserve. Hour-long episodes take the audience on a personal journey that is exciting, exhilarating, compelling and emotional, where the big cats are the central characters. The passionate connection the Scotts have with the animals is almost infectious and helps to open up a rarely seen world that most people never get to see in person.

The show teams up Jackson Looseyia with Angela and Jonathan Scott, renowned conservationists. Zoologist Jonathan Scott moved to Kenya in the 1970s. With his wife, Angela, he presented Big Cat Diary, the first such venture in a lifelong shared passion for big cat conservation through books, TV and photography. The couple are committed to raising awareness and conserving wildlife, especially big cat protection. When asked about the most valuable lesson they have learned from the cats, they said, “We are inspired by spending so much time with nature. It helps to remind us of the gift of life, that death is a natural part of life; something none of us can avoid. Watching an old lion in the twilight of its years, still determined to cling to life, despite its age and the inevitable injuries; this makes us value and respects our own lives.”

Angela and Jonathan Scott live in Kenya, at the Masai Mara National Reserve, and continue their lifelong work of documenting and protecting the resident creatures, while also raising awareness about endangered species. In one interview, Jonathan stated: “I have always loved the countryside and nature. As a child, I watched the wildlife TV series On Safari with Armand and Michaela Denis. I was mesmerized by Africa, and the thought of living among wild creatures was my dream. My favourite day of the year was when we visited my Auntie Florence in London. She would take us to the zoo in Regents Park, with the leopard my favourite big cat even then.”

Big Cat Tales Plot: What is it about?

‘Big Cat Tales’ follows the big cats, against the spectacular, untouched backdrop of the stunning scenery of the animal reserve. The central characters, over the five weeks of its airing, are various groups of big cats. There was the cheetah coalition, the well-known Marsh Pride of lions, and leopards. Jonathan says, “Big Cat Tales taps into the lives of the lions, leopards and cheetahs that Angie and I – and our co-presenter Jackson ole Looseyia – have been following for many years in Kenya’s fabled Masai Mara National Reserve. Because we know these big cats and can recognize them as individuals – not just by how they look but in terms of their individual characters – we are able to provide a very personal wildlife experience for our audience.”

About memorable moments in the series, the conservationist says that there are many: “The sequence with Bahati the leopard female, that shows her feeding on a male impala in a croton thicket accompanied by her two young cubs is a lovely sequence. It really gives you an insight into the secret lives of these extraordinary creatures. For Angie, it was her times spent with the Marsh Pride of lions – the same lions we have followed since 1977. The sequence when Angie is surrounded by the whole pride resting up in the shade of her vehicle is very special.”

There are five episodes, each of which focuses on individual stories of specific animals as they live out their daily lives in Masai Mara. The episode is about Malaika the cheetah, and Bahati the leopard, both with young cubs to fend for, and new members of the Marsh lion pride. Episode two gets deeper into the Marsh Pride’s internal dynamics and Malaika’s encounter with a wildebeest. Episode three is about the lionesses and also follows Malaika as she hunts buffaloes and impalas and checks out the new cubs being born into the Marsh Pride. Episode four is set a few months later and sees the Marsh Pride missing, Bahati battling a huge crocodile, and the arrival of some cheetahs. In the finale, we meet Fig the leopard and watch the cheetah coalition on a coordinated hunt.

Big Cat Tales Season 2 Release Date: When will it premiere?

‘Big Cat Tales’ Season 1 premiered on October 29, 2018. The show almost makes the audience want to go see these amazing cats in person. The production values overall are excellent. The cinematography is laudable and the couple’s passion as explorers shines clearly through. In fact, the camera work is the main draw for people who are interested in visually stunning programming. The scripting is skillful, giving the viewers just enough commentary to know what is going on and to learn something they might not have known about the spectacular beasts it documents, but in no way detracting anything from the overall environment or taking the attention away from the animals at all.

As far as the next season goes, we don’t have an official announcement yet. Though considering the uniqueness of the show, we would be surprised if it doesn’t get another season. Our best guess is that if the show does get renewed, ‘Big Cat Tales’ Season 2 can release sometime in October 2019. We will update this section as soon as we hear more.

Since no official announcement has been made, we do not have a trailer for ‘Big Cat Tales’ Season 2. So for now, you can enjoy a small clip from Season 1 below. Stay tuned for more updates.