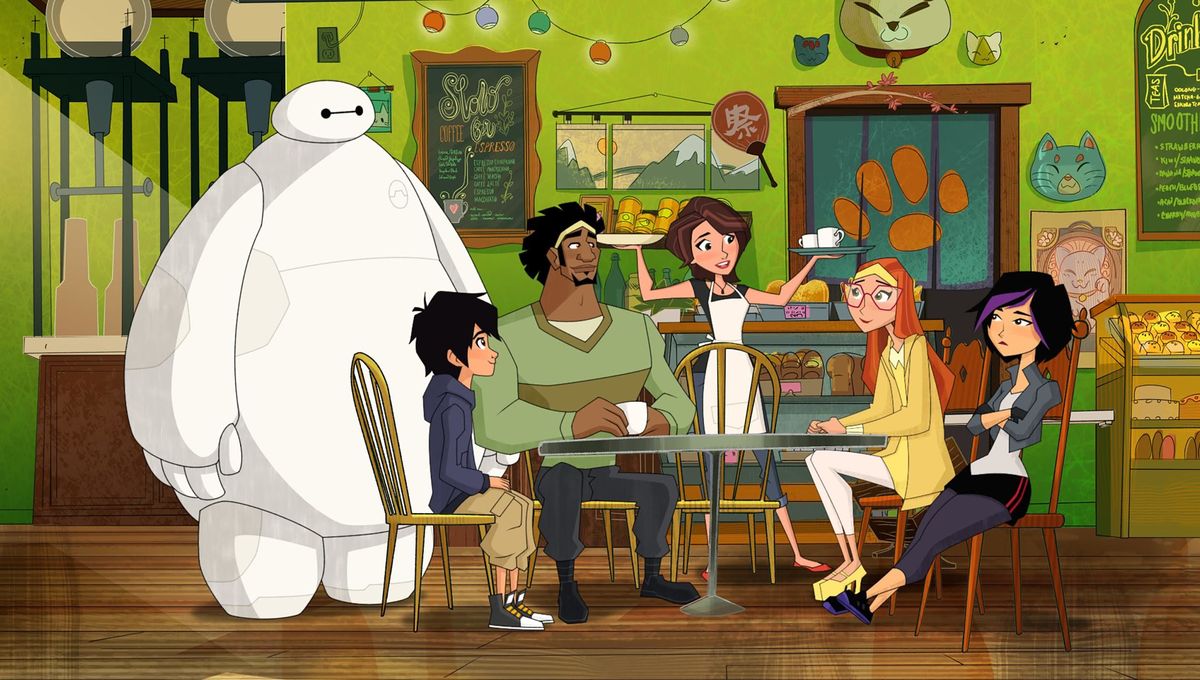 ‘Big Hero 6: The Series’ is an American superhero comedy show that airs on the Disney Channel. It first premiered on November 20, 2017. The show has been produced by Disney Television Animation and has been developed by Mark McCorkle and Bob Schooley, the creators of ‘Kim Possible’. Schooley and McCorkle also serve as executive producers along with Nick Filippi.

The show is based on the 2014 Disney movie, ‘Big Hero 6’, which won the Oscar for the best-animated feature. The film itself is based on the comics of the same name, which is published by Marvel Comics. The events of the series pick up after the events shown in the film and have traditional hand-drawn animation. The series was initially planned on being released on Disney XD before being moved to the Disney Channel. It is centered around Hiro who must prove his scientific knowledge academically while trying to be a hero at the same time.

While the series has definitely garnered fans, critics have not been as open with praising it, as they were with the movie. The humor in the series does stand out as heartfelt, but it somehow falls a bit short when it comes to characterization. Anyway, despite the criticism, the show has been renewed for another season. Here’s everything we know about it.

The cast of ‘Big Hero 6: The Series’ is led by Ryan Potter as Hiro Hamada, the protagonist, who is a 14-year-old prodigy in robotics. Hamada’s elder brother Tadashi Hamada was killed in an explosion that took place at the San Fransokyo Institute of Technology (SFIT). Hiro serves as the unofficial leader of the Big Hero 6 group.

Scott Adsit plays Baymax, an inflatable robot that Tadashi had built, but which Hiro developed. Hiro reprogrammed Baymax from being a medical assistant to knowing martial arts and having armor, not to mention a jetpack and wings.

Jamie Chung appears as Go Go Tomago, a student at SFIT who is tough and athletic. Go Go’s weapon of choice are two large discs, and some smaller discs when he is in action.

Brooks Wheelan plays Fred, a slacker in the team, who uses a lizard-like costume while fighting. Fred’s butler Heathcliff, played by David Shaughnessy, assists the team in their training efforts.

Maya Rudolph appears as Hiro’s aunt and guardian, someone who has a tendency to cook strange and new dishes and has no clue about Hiro’s double life since Hiro is convinced he would never be allowed to leave the house if she found out about his crimefighting skills.

Big Hero 6: The Series Plot: What is it about?

‘Big Hero 6: The Series’ picks up where the movie left off. Hiro and his team of friends arm themselves to fight scientifically advanced villains who have unleashed havoc upon the city. However, the series slightly deviates from the movie’s content, since Hiro’s aunt is still blissfully unaware of his secret identity, and the public, too, seems clueless about who they really are. We are also introduced to a new character who is not present in the movie, that is, Professor Granville played by Jennifer Lewis. She acts as a mentor to Hiro.

Season 2 starts with Hiro’s jealousy of Karmi’s internship at Sycorax which leads him to intern at Krei Tech. As Hiro continues to fight mysterious villains and thrawting bank robberies with the help of Baymax, Honey, Fred and GoGo, he realizes he has bigger challenges to face like Nega-Globby taking control of Globby’s body to cause chaos around the city and turning Globby from an adored hero to a wanted criminal overnight.

In Season 3, we might see Big Hero 6 take on the new villain Hardlight in a real-life video game duel.

Big Hero 6 Season 3 Release Date: When will it premiere?

‘Big Hero 6’ Season 3 premiered on May 6, 2019. As far as the next season goes, we have good news for the fans. Disney has already renewed the show for another season and if everything goes as per plan, you can expect ‘Big Hero 6’ Season 3 to release sometime in May, 2020. We will update this section as soon as we hear more.

Should You Watch Big Hero 6: The Series?

What stands out about the series is what made the movie special in the first place as well. The focus is mostly on the group dynamics, and viewers will find it entertaining to watch as the kids argue back and forth whether they should remain united to protect the city from dangers. With plenty of humor and conflict, the show moves on, and although the animation might seem a little rough compared to the film, it eventually grows on you and works rather well for the show.

The general vibe you get is that a comic book story has leaped off the page and onto your screen. However, one area where the show falls a little short is characterization. Hiro’s nuanced relationship with his brother Tadashi is not really explored well, and he is just shown occasionally missing his brother, without going into the implications of this loss. Moreover, Hiro’s scientific pursuits are only shown fleetingly, and for someone to be a prodigy, it definitely makes his character feel incomplete if we do not get to see his genius on display. However, this is saved by the presence of the other members of the team. Much like the members of Big Hero 6 are most effective when teamed up, the execution of the show also works best when all the characters share screen space, in their capacity of assisting Hiro. As the characters interact both in and out of costume, we see how their personalities define their roles on the team, and this is definitely material that the show could build on in the upcoming seasons. The villains on the show are also well crafted, keeping the target audience in mind, while also making them efficient enough to act as a foil to our superhero team.

While you wait for ‘Big Hero 6: The Series’ Season 3 check out the trailer for Season 1 below.