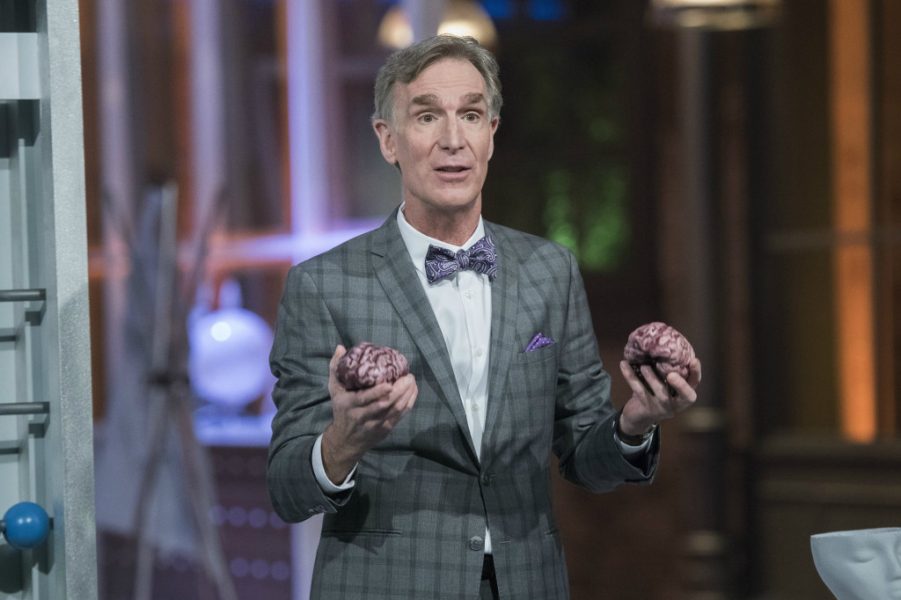 ‘Bill Nye Saves The World’ is an American television talk show hosted by Bill Nye himself. The series airs on Netflix and first premiered on April 21, 2017. Nick Murray and Liz Plonka direct the show. Nye is famous for his show ‘Bill Nye the Science Guy’ and is popularly known by this name. Nye has also made a name for himself by subsequently appearing on popular media as a science educator. He started his career as a mechanical engineer for Boeing’s. He is now an actor, comedian, host, scientist and even a writer.

Coming to the show itself, its byline goes “Emmy-winning host Bill Nye brings experts and famous guests to his lab for a talk show exploring scientific issues that touch our lives”. The series is firmly focused on science and its relation to politics, society, and pop culture. Several topics are explored over the course of the season, which includes climate change, studying video games from a scientific point of view, and alternative medicine.

The show also refutes myths and claims that are anti-scientific. Naturally, Nye’s stardom is enough to attract a large fan base, and when coupled with the topical and timely relevance of what is discussed, and Netflix’s wide outreach, it is unsurprising that the show has such a large fan base. However, critics have given it mixed reviews, with some praising Nye’s way of handling the content, while others have said that some parts of the show seemed a bit strange and out-of-place to them.

Bill Nye Saves The World Cast: Who is in it?

Bill Nye Saves The World’ is of course hosted by Bill Nye. Alongside him, to help him present the show, he has Katie Kloss who is a fashion model and was at one time a Victoria’s Secret Angel, Derek Muller who is a Youtuber and even an educator, Nazeem Hussain a comedian, Emily Calandrelli, the tv host and producer and even Joanna Hausmann who is a writer and a comedian. All of them help him present his show and send in reports during the show.

In the upcoming season, it is likely that the main cast will return, though we may see some new faces to help Nye make his presentations even better. However, one thing is certain. If there is a new season, Bill Nye is definitely coming back to talk some more science into us.

Bill Nye Saves The World Plot: What is it about?

The basic idea of the show, ‘Bill Nye Saves The World’, is to talk about science and the issues around it. He invites an array of experts and popular guests to his lab to talk about the scientific issues that are affecting our lives and the world. It even goes more into depth by talking about topics like the relationship between science and politics, culture and society. Bill Nye wants to send all his viewers a message and educate them about certain things that he deems are important from a scientific point of view. He wants to make people more aware of their surroundings and how to tackle certain issues. His mission is to combat scientific illiteracy in today’s world with everyone who doesn’t seem to value reason.

In each episode, there is new discussion, and each episode features a live panel discussion and even reports from a wide range of correspondents. Over the past few seasons, one can tell that there have been a whole lot of diverse topics that he has talked about and covered. Some of them include, “Earth is a hot mess”, “More food, less hype”, “The Marijuana Episode”, “How to travel through time” and many such topics like these.

Nye’s skepticism is something that is legendary to anyone who has followed the man’s appearances in public. This skepticism drives the show to a certain point wherein Nye questions the status quo of things and his methodology is to fall back on science for the answer. Although he is stylish while talking about science, and completely in his stride, he makes the presumption that the audience is on his side. The result can be a little alienating for the viewers, overall.

Nonetheless, one cannot deny that in an age of post-truth, when the grand narrative or the objectivity of science itself is being questioned, be it through anti-vaccination protests, flat-earthers, or climate change deniers, the series could not be too timely, and we need a skeptic like Nye to decenter the other abstract grand narratives like religion and faith, so that the conversation can come around to the factual nature of science.

Hopefully, in the upcoming season, we will see Nye continue in a similar manner, and we expect him to take on many more topics and explore their relations to society as we know it today. After all, there is a lot more science to be talked about and we would rather hear it from Bill Nye the science guy than from anyone else.

Bill Nye Saves The World Season 4 Release Date: When will it premiere?

‘Bill Nye Saves The World’ Season 3 premiered on May 11, 2018. There has been no news as of yet about another season. Netflix has not announced anything officially yet. However, the series did meet with some pretty mixed reviews and has had to live down criticisms of being a little too corny at times, or of not having gone into the matters discussed, at depth.

Nye is an immensely popular persona, though, and it would benefit Netflix to have a show hosted by him because the viewership would not fall. Thus, it is likely that the show will get renewed. If that does happen, our best guess is that ‘Bill Nye Saves The World’ Season 4 might release sometime in the fall of 2019. We will update this section as soon as we learn more.

While we wait for an update on ‘Bill Nye Saves The World’ Season 4, check out the season 3 trailer to refresh your memories. If you haven’t seen the show yet head over to Netflix to catch all the episodes of the previous seasons.