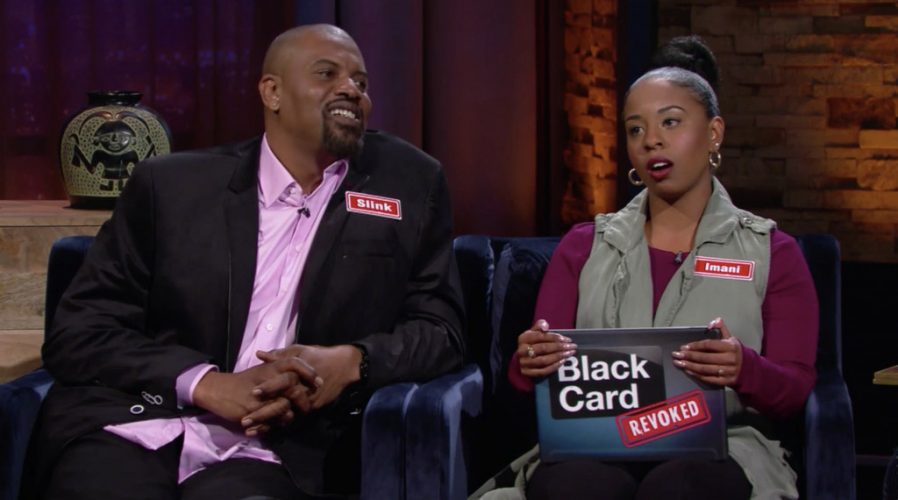 Black Card Revoked is an American game show of the United States. The show first premiered on January 18th, 2018. Hans Van Riet is the director of the show. It is almost impossible not to burst out laughing whether you are watching the game on the TV, playing the game at home with your friends or just looking at others playing this game. Ify Nwadiwe, Jasper Redd, Angela Yarbrough are the producer of the series. David A. Hurwitz is the executive producer of the show while David Weintraub, Gelila Asres and Molly O’Rourke are the co-executive producers of the show. Bill’s Market & Television Productions and Alternative Productions are the production company handling the show.

Black Entertainment Television (BET) is the distributor of the show. Every episode of the show runs for 30 minutes. The show is adapted by a party game which goes by the same name. This game was initially introduced by “Cards for All People” in 2015. The game creators are Jay Bobo and Latesha Williams who serve as the executive producers of the game show. These people also created Cards against Humanity which quickly became popular at home parties and on social media.

Black Card Revoked Season 2 Cast: Who is in it?

The cast of the show includes Tony Rock who is an actor and comedian. He serves as the presenter, host, and anchor of the show. Celebrity partners are Finesse Mitchell, Karlous Miller, and Brandon T. Jackson. Other guests featured in the show are Justin Hires, Gerald ‘Slink’ Johnson, Loni Love, Billy Sorrells, Laz Alonso, Alonzo Bodden, Big Boy, London Brown and more.

Black Card Revoked Season 2 Plot: What is it about?

Black Card Revoked includes contestants teaming up with comedians and the celebrities for a chance to fight for $10,000 by proving their awareness of cultural commonalities, milestones, black history and more. The game show involves debate and discussions based on every individual’s answers. Everybody has this perception of what a fundamentally black thing looks like. This game proves them wrong.

BET networks have come up with this game show that is based on a party game which tests the understanding of various subjects such as politics, historical facts, entertainment, and pop culture. All of the debate is done from a black perspective.  Each episode features three teams; every team includes one celebrity guest and a contestant partner for the game. The game show works just like the favourite party game by the same name. A piece of your Black Card gets revoked for every incorrect answer you give. For instance, if you have not encountered “Friday” or “The Color Purple,” you are going to be in trouble. The knowledge of the black culture is used to determine if the Black Card of the contestant will be revoked or kept. All the teams have an opportunity to win up to $10,000 playing the game.

Black Card Revoked Season 2 Release Date: When will it premiere?

There is no such update on the renewal of the show for a second season by BET. The last episode of the previous season was aired on 12 April 2018. We will have a wait a little longer to find out if it will return with another season. Meanwhile, stay tuned!

An air date for Black Card Revoked Season 2 is yet to be announced by BET. The first look of season 1 of the series by BET network can be viewed below. Watch it and get ready for your next party game.