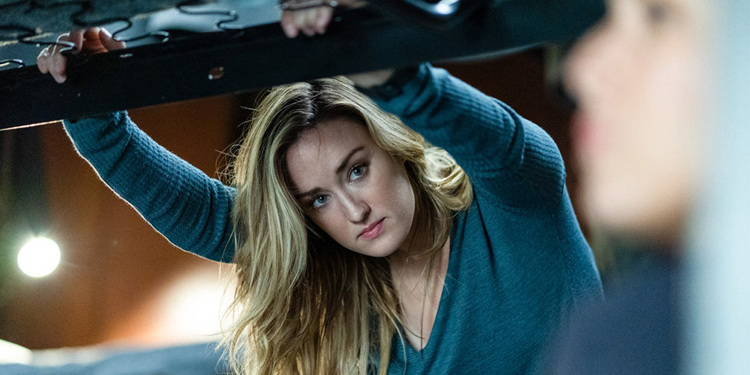 The fifth season of ‘Blindspot’ is in no mood to let fans compose themselves after the loss of Edgar Reade at the beginning of the season. In the latest episode, titled ‘Ghost Train,’ Rich discovers the origin of Jane’s Cerberus tattoo and shares the news with his friends only to get disappointed by their lack of interest in the thing that got them working together. Patterson is the one that talks some sense into the agents and tracks the tattoo to a place where a fellow officer, Keaton, is in exile. Zapata rushes to Italy to warn Keaton of Madeline’s vicious motives but exposes her location to the Interpol along the way, who pass the information to Madeline. Once she meets Keaton, he reveals that he has been working with Allie and Boston to help the agents but the two have disappeared recently.

Zapata notices Keaton’s limp and after taking a glance at Keaton’s laptop camera, Zapata realizes something is fishy as Keaton always covers his camera with an electrical wire. The next moment, Madeline rushes in with her men and captures Zapata, killing Keaton in the process. Rich and Patterson do their best to inform Jane and Weller but in vain. As time is running out, they rig the place with a bomb to delete all the data from the servers. Unfortunately, the trigger malfunctions and as they are destroying the servers manually, Madeline’s men ambush their hideout. Rich gets captured and Patterson gets stuck in the server room. The bomb detonates, killing her in front of Rich’s eyes. In case you want to know what can happen in ‘Blindspot’ season 5 episode 9, we have got your back!

After watching the intense action-packed eighth episode, fans are left with just one question – “What in the blue heaven were the makers thinking?” In all honesty, I was caught off-guard too but a part of me still believes Patterson is alive and has just faked her death. Remember when Rich asks her whether she has another plan and she says, “I always have a Plan B?” Well, that can be the case here. She might have exercised her secret plan and somehow managed to shield herself from the destruction. But if she is dead, the team is going to suffer a massive blow.

As Madeline drags the team back to the FBI headquarters, she might blackmail them into confessing the crimes Madeline committed, including the impending execution of the chemical weapon that would wipe the memories of the citizens and make them mere drones to be controlled by Madeline. Only Matthew can help the team before it’s too late, but that is only possible if he manages to gather the courage to fight against his oppressor, Madeline. We can also expect a few old friends of the agents, to come out of the shadows and try to save the agents from Madeline’s clutches.