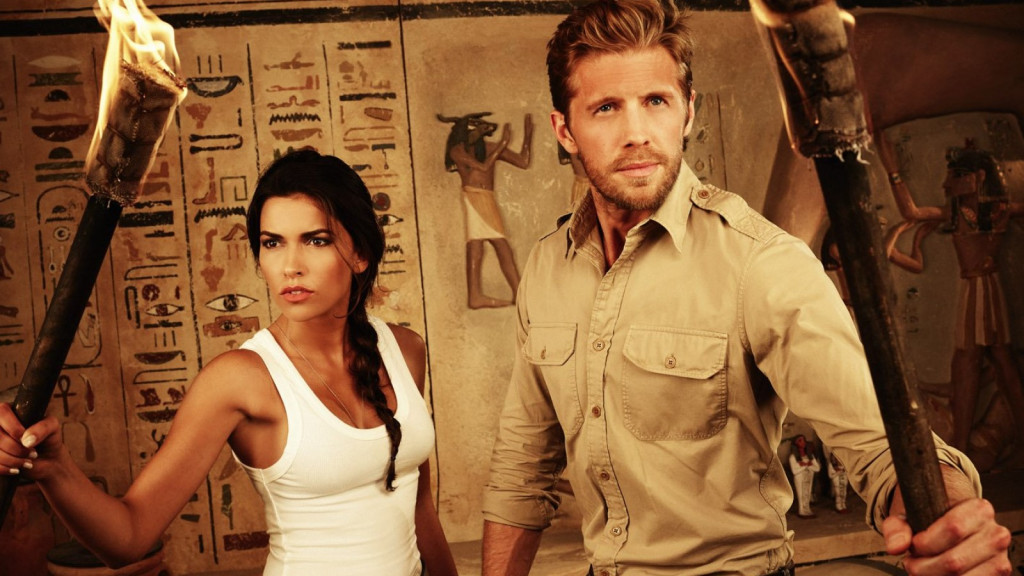 Let’s present you with a scenario. Hints of ‘Indiana Jones‘ with a touch of ‘National Treasure‘ … what do you get? Think hard. CBS, taking a break from its long list of procedural dramas, added a contemporary action-packed thriller to its catalog. Yes, ‘Blood & Treasure’, which sticks closely to the themes of the two classic movies mentioned above, is created and written by Matthew Federman and Stephen Scaia. Developed as another entrant to the channel’s repertoire of scripted shows for summer, this series follows an antiquities expert and a sly art thief who comprise the two members of an unlikely team to apprehend a notorious terrorist. In this globe-trotting adventure, we witness a delectable mix of action, drama, violence, and humor.

‘Blood & Treasure’ first premiered on May 21, 2019, on CBS. Federman and Scaia are also the executive producers for the show, along with Taylor Elmore, Ben Silverman, Marc Webb, and Mark Vlasic.

Blood & Treasure Cast: Who is in it?

Sofia Pernas and Matt Barr lead the cast as Lexi Vaziri and Danny McNamara respectively. Pernas is a Moroccan-Spanish actress whom you might already recognize from her appearances in ‘The Young and the Restless’, ‘Jane the Virgin’, and ‘The Brave’. She also appears in another CBS drama – NCIS. American actor Barr is best-known for his roles in ‘Hatfields & McCoys’, ‘Commander in Chief’, ‘One Tree Hill’, ‘Harper’s Island’, and ‘Hellcats’.

Joining the duo in other prominent roles are Katia Winter as Gwen, Michael James Shaw as Shaw, James Callis as Hardwick, Alicia Coppola as Dr. Ana Castilla, and Mohammed Marouazi as Reza Vaziri. Anna Silk appears in a recurring role as Roarke.

Blood & Treasure Plot: What is it about?

Danny McNamara is brilliant antiquities expert who was formerly employed with the FBI. Accompanying him is Lexi Vaziri, an equally genius and cunning art thief. Polar opposites and from completely different backdrops, this unlikely duo forms an odd team to track down the ruthless terrorist, Karim Farouk. His modus operandi involves stealing rare treasures and using the cash to fund his attacks. The mission begins when Danny’s mentor is abducted by Farouk. The two partners now travel across borders in their hunt for justice. However, in their adventure, they also find themselves involved in the midst of a “2,000-year-old battle for the cradle of civilization”.

The show is a typical adventure-packed, crime-thriller drama. But the creators have done an awesome job of throwing some hilariously tense moments in the mix. One of those funny moments happen when Danny and Lexi meet in a cop car. From the confrontation, it’s evident that this is a reunion and they both have some unfinished business to take care of. Lexi immediately asks Danny in an accusing tone, “Are you stalking me?”. Danny’s nonchalant reply involves a description where he explains that he had tracked her passport to France. And then a credit card hit on one of her aliases pointed him there. Finally, he admits that he had been indeed following her movements closely in the hopes that their paths might cross.

The brief encounter concludes with Danny saying, “OK yeah… that did sound like I was stalking you but someone’s in trouble and I need your help.” It’s clear that Danny needs Lexi’s help urgently so that he can rescue his mentor. However, there are complications in the mix. If they have to be successful in their goal, they need to recover the tomb of Cleopatra first. Nobody has ever been successful in this mission as far as history goes. But can they pull off this stint and make it out alive? Well, watch the series to find out. This raunchier and sexier version of ‘National Treasure’, which is some sort of a modern adaptation of ‘Indiana Jones’ is sure to generate some heat — fit for a still hotter summer!

Blood & Treasure Season 2 Release Date: When will it premiere?

‘Blood & Treasure’ season 1 premiered on May 21, 2019 on CBS. Considering the ambitious scale of the show,  it proved to be quite an engaging watch for viewers. It is also a welcome respite for die-hard fans of ‘Indiana Jones’ who are still waiting for a new sequel. Moreover, the chemistry between Lexi and Danny is interesting, not to mention promising.

Next, as far as a season 2 is concerned, we have good news for the fans. On June 26, 2019, CBS announced that the show has been renewed for another season. “Blood & Treasure is a fun, escapist adventure with comedic elements filmed in multiple locales around the world that has been a great performer and a wonderful addition to our summer schedule,” said Amy Reisenbach, Executive Vice President, Current Programs, CBS Entertainment. “We’ve heard the story pitch for season two and look forward to seeing all-new exploits from Russia to Southeast Asia next year.”

Even though no release date was revealed, our best guess is that ‘Blood & Treasure’ season 2 should come out sometime in May 2020. Stay tuned for the latest on the show.

Here’s official trailer for season 1 of ‘Blood & Treasure’. Head over to CBS’s official website to watch video clips from the show.