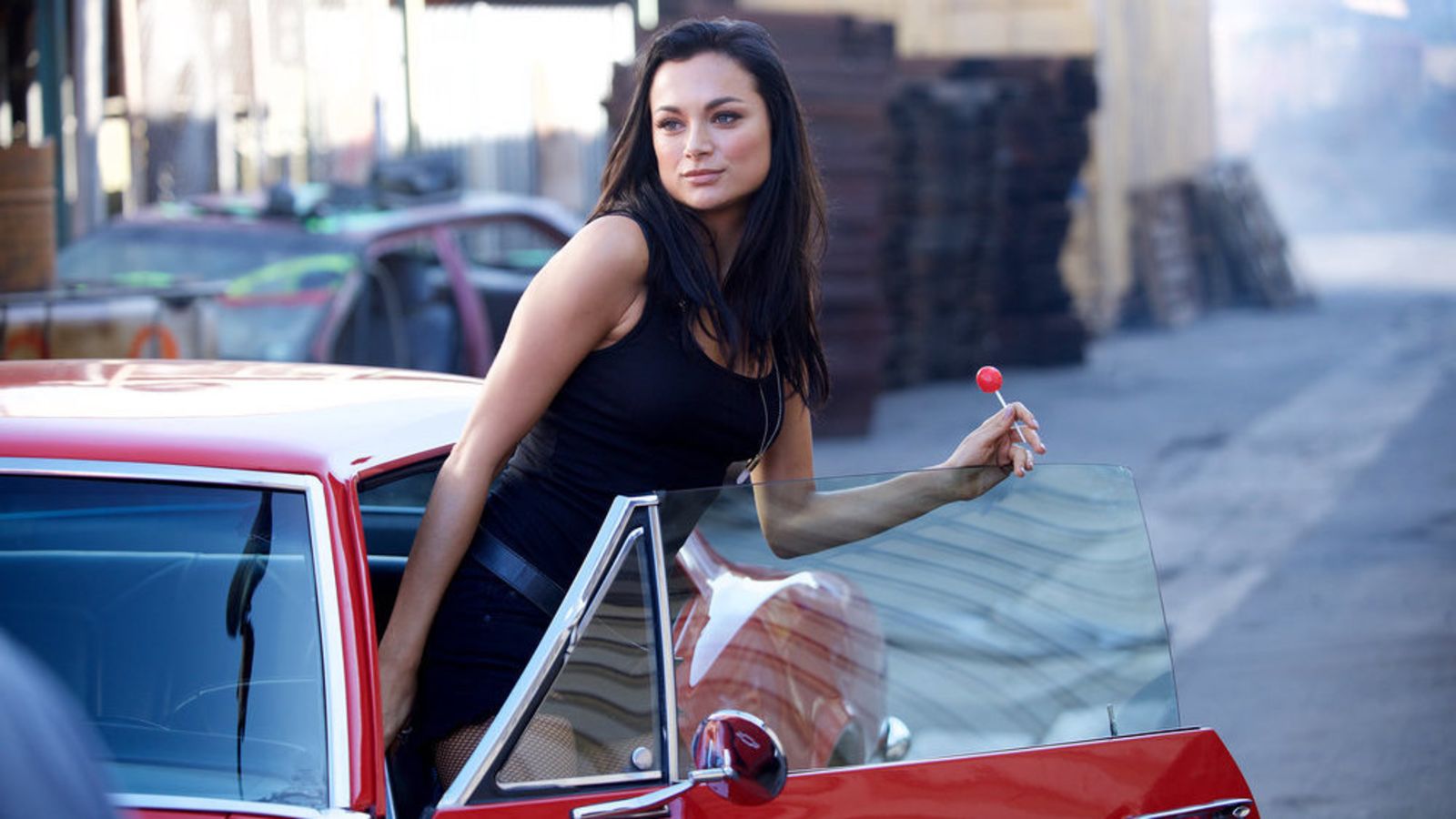 ‘Blood Drive’ is an American science fiction action series that airs on Syfy. It first premiered on June 14, 2017 . The series is also known as ‘Midnight Grindhouse Presents Blood Drive’ and as is evident from the title, it harks back to the grindhouse genre which is basically exploitation, which has been present in films, and usually features a lot of sex, blood, and violence, although it might be reductive to just focus on these aspects while talking about the rich and subversive history of the grindhouse genre. Anyhow, coming back to the series, it has been created by James Roland.

The story of the series is set in Los Angeles in a dystopian future in 1999 where the United States is divided into two parts after the Great fracking Quakes. Due to that, a narrow gorge named as the scar gets formed near the Mississippi River. A huge company named Heart Enterprises uses the discoveries found from the bottom of the Scar to their advantage. The series follows a police officer named Arthur Bailey (Alan Ritchson) who is also known as Barbie. In Los Angeles, he is forced to work with Grace D’Argento (Christina Ochoa). She is a vicious femme fatale who has a plan of her own. They take part in a deadly car race which runs on human blood. Julian Slink (Colin Cunningham) is a secret master behind the ceremonies which Grace and Arthur are not aware of.

Content like this is very common in grindhouse projects and relatively recent additions to the genre, like ‘Drive Angry’, or more popularly, Robert Rodriguez’s ‘Machete‘ and ‘Planet Terror’, and Quentin Tarantino’s underappreciated ‘Death Proof‘, all go to show that audiences love to indulge in what is shown projects such as these. ‘Blood Drive’ is no exception and has not only managed to draw a strong fan base but has also been received favorably by critics.

Blood Drive Cast: Who is in it?

The main cast of ‘Blood Drive’ includes Alan Ritchson as Arthur Bailey, a cop, Thomas Dominique as Christopher Carpenter, Christina Ochoa as Grace D’Argento, a femme fatale with a hidden agenda, Marama Corlett as Aki and Colin Cunningham as Julian Slink, the master of ceremonies, and someone who has links to both Arthur’s and Grace’s past.

The recurring cast of the series is Andrew Hall as the Gentleman, Sean Cameron Michael as Old Man Heart, Darren Kent as the Scholar, Carel Nel as Rasher, Brandon Auret as Rib Bone and Aidan Whytock as Garrett Kemble. There are several other characters who serve to show the dystopian nature of society and how people will do anything to survive.

Blood Drive Plot: What is it about?

The plot of the show ‘Blood Drive’, is set in the future in Los Angeles where the climate and temperatures keep changing, and the water is as costly as oil. Arthur wants to survive this chaos, so he decides to team up with femme fatale Grace against his will. He participates in a deathmatch where any participant who arrives last at the checkpoint will have his or her head exploded. Even cars don’t function on petrol or diesel because they run on human blood.

Chris’s partner Bailey who had also participated in the death race goes missing. Chris starts investigating the case and finds clues to his disappearance. He tries to figure out what happened to him. Later on, he stumbles onto a disturbing discovery from which he learns that this is one of the most alarming cases of his life. During the race, Grace and Arthur try to stay out of trouble at their first pit stop. They also travel to a mental asylum to look out for Grace’s missing sister. While traveling to the Save Lands, they get a clue to Karma’s location.

Arthurs tries to draw a line between good and evil by helping a sheriff to save his small town. Grace tries out her kung fu techniques against a mysterious restaurateur. Arthur gets wounded on a vision quest and falls into Cronenburgh. It is an oasis which is so impressive that is very difficult to believe in. As the Slink throws a Mayhem Party, Grace with her new partner tries to fight for Arthur. At the end of the season, Grace, Arthur and Slink end the Heart enterprises, but they don’t know that their greatest fears are waiting for them.

There is something to be said for the series remaining true to the cinematic tropes of the genre with washed out colors, lens flares, aggressive light saturation, and zooms and jump cuts. However, it is not a traditional celebration of grindhouse films and takes a tone of its own, a tone that is almost funny. That being said, a lot of the series hinges on Ochoa’s performance and she does not disappoint in this regard. When our world is on the brink of so much geopolitical turmoil, sometimes we need good old fashioned grindhouse dystopia not just as a means of escape, but also as a foreshadowing of what society might devolve to.

Blood Drive Season 2 Release Date: When will it premiere?

‘Blood Drive’ Season 1 premiered on June 14, 2017. On September 6, 2017, the showrunner announced that Syfy had decided to cancel the series. He said, “Unfortunately, your suspicions are correct. Syfy has canceled Blood Drive after one season. If this news makes you angry or sad, you’re not alone. I found out not too long ago, but have been trying to think of a way to tell you guys since I felt it was up to me to let the fans know.” However, he urged fans not to lose hope, saying that perhaps it could be picked up again, and praised the network for being steely enough to air a grindhouse television show in today’s day and age when we have a ton of advisories and censorship checks in place. If the show does get picked up by some other network, we will update you about ‘Blood Drive’ Season 2 release date.

Check out the trailer for Season 1 to refresh your memories of the show.