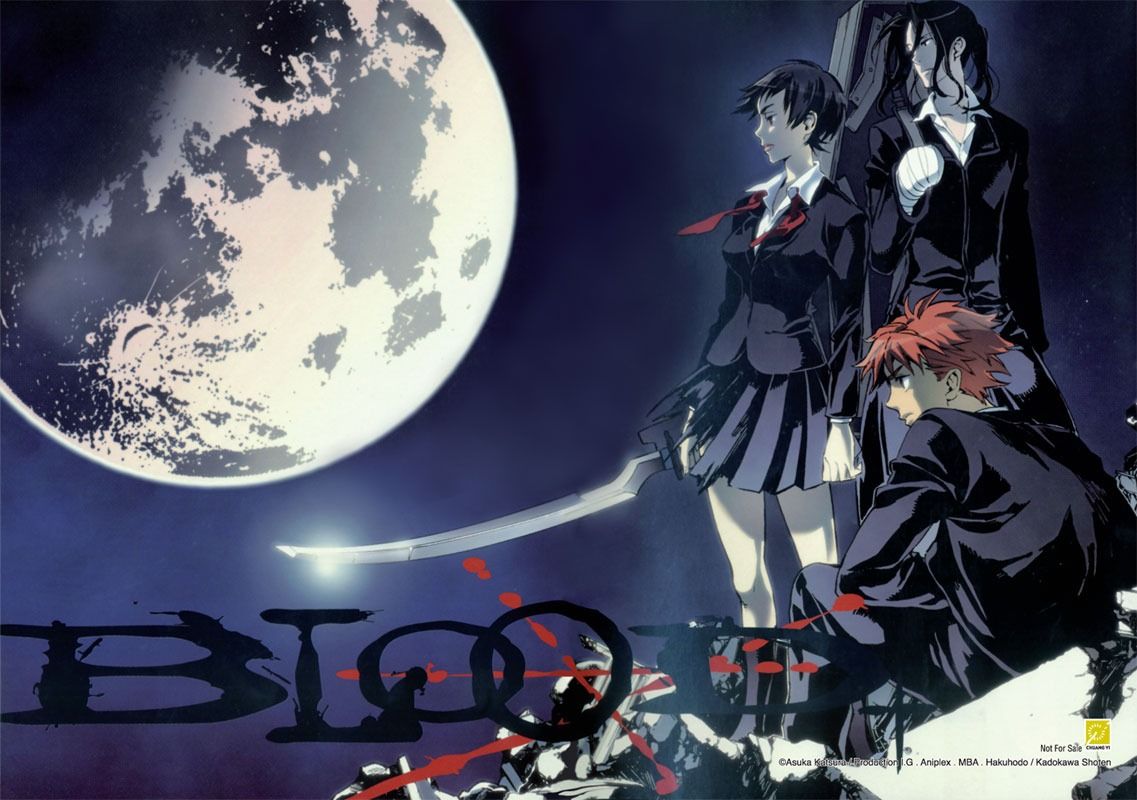 If I had to sum up the entire ‘Blood Plus’ series with one sentence, I would say that it’s simply a show about a cute girl who battles monsters. From this description, it may sound like a very unoriginal and predictable anime but there is so much more to it than that. ‘Blood Plus’ has a very strong storyline that mostly has a dark setting involving battles after battles. Each of the battles has a reason behind it and the plot is complex enough to make you wonder what will happen next.

Coming from Production IG Studio that is known for shows like ‘Psycho-Pass‘, ‘ Guilty Crown‘ and ‘Kuroko no Basket‘, the animation quality of ‘Blood Plus’ is a feast for the eyes as it portrays characters with incredible detailing and stunning backgrounds that involve cityscapes and sceneries.

The background music scores are quite moody and have this dark gloom that fits the vibe of the show. When it comes to the characters, they are really well-developed and all of them go through a very gradual transformation throughout the 50-episode run-time. By the end of the series, all main characters have a lot of depth to their personalities and even their relationships have been portrayed in the best possible way. The characters in ‘Blood Plus’ do have Vampire-like tendencies but it never really emphasizes too much on the vampire traits of the characters. Instead, it creates more of a balance that makes it appealing to even those who are not into Vampire anime shows. Overall, ‘Blood Plus’ has a slightly longer runtime than most anime but it is still very enjoyable for the most part of it. It is definitely a must-watch for anyone who enjoys the blend of action, drama and mystery all at the same time.

Blood Plus Season 2 Release Date: When will it premiere?

‘Blood Plus’ season 1 premiered on October 8, 2005 and with a total of 50 episodes, it ended on September 23, 2006. Apart from this season, there have been a few alternate versions of the anime as well. Since the release of season one, there haven’t really been too many rumors about it which is rather strange for a popular anime like this one. Now, it has been over 10 years since its initial release and it pretty clear that the hype around it has entirely faded away. Being an anime original, the creators of the show can still revive it anytime they want since they don’t have the constraints of a source material holding them back. But considering the fact that it is so old, we’ll probably never see more of it.

Also, ‘Blood Plus’ comes from the very well-known Production IG Studio which already has quite a lot of projects lined up for at least the coming few years. It seems very less likely that they would think of going back to an anime that received nothing more than average response from most viewers. So as of now, it seems like season 2 of ‘Blood Plus’ will never really happen. Even then, if there is any confirmed news regarding ‘Blood Plus’ season 2 release date in the future, we will update it here in this section.

‘Blood Plus’ season one is licensed under Sony Pictures Entertainment and its English Dub is available on Amazon Prime.

‘Blood Plus’ revolves around an ordinary girl named Saya Otonashi who lives a fairly monotonous life with her adoptive family in Okinawa. The only thing that is slightly unusual about her like is that she has absolutely no memories of her life beyond the previous year. Her severe amnesia disables her from remembering who she truly is and where she comes from.

But one fine day, her terrorizing past comes back to her when she is attacked by a vicious creature that feasts on human blood. The creature almost manages to get her when a strange man named Haji comes to her rescue and temporarily manages to rid of the bloodthirsty monster. Haji then forces her to drink his blood which suddenly gives her the power to slay the creature by using her own blood as a catalyst.

Soon, Saya is introduced to a whole new world where an organization named Red Shield has been established to kill other beasts of the same sort. While Haji and Says try to make the world a better place by fending off these monsters with other members of Red Shield, Saya must also somehow unravel the mysteries of her past.

Haji is the chevalier who first rescues Saya. He is close to 140 years old but he still looks like he’s somewhere in his 20s. His origins are completely unknown but it is said that he many from an Eastern European nation. He is tall and has a fair skin with long jet black hair. His usual eye color is blue but when his powers are unleashed, they tend to turn crimson. Initially, when he isn’t too close to Saya, he comes off as someone who is rude and selfish. But later he shows his positive side when he gets close to her and even becomes her chevalier.

Throughout the series, Hagi shows a very calm and stoic personality. He never really expresses himself too well and even when he does, he only says a few monotonous sentences that don’t even describe half of what he truly feels. His main priority in life is to just make sure that Saya is safe and he does not hold himself back when it comes to telling her what’s right or wrong.

Kai is one of the main protagonists of the series who is Saya’s elder brother. He is a good looking teenage boy with tanned skin and short brown hair. He was once a very popular kid at school who was known for his amazing basketball skills. But after Saya’s arrival, he quits playing sports and starts getting into a lot of fights. At the beginning of the series, he is quite an impulsive guy who lashes out on anyone who pressurizes him. But after his father’s death, he becomes the head of the family and tries to get himself together to properly take care of his family. Even after this, he goes through a lot of transformations throughout the series and he is one character who turns out to be completely different from what he started out to be.

Saya Otonashi is the main female protagonist of the series who is saved by Sagi and later even falls in love with him. She has black hair and her hairstyle keeps changing throughout the series. She is quite short and he cheeks always have a rosy appearance to them. When she transforms into her Chiropteran Mode, she is able to retain most of her human features and the only thing that changes about her are her eyes. She is overall a bright cheerful girl who enjoys making new friends. But initially, she also acts like a spoilt immature teenager who is a little self-centered. But after she loses her memories and spends her life in Okinawa as an ordinary teen, she becomes this innocent reserved teen who seems to be very naive about the world around her.