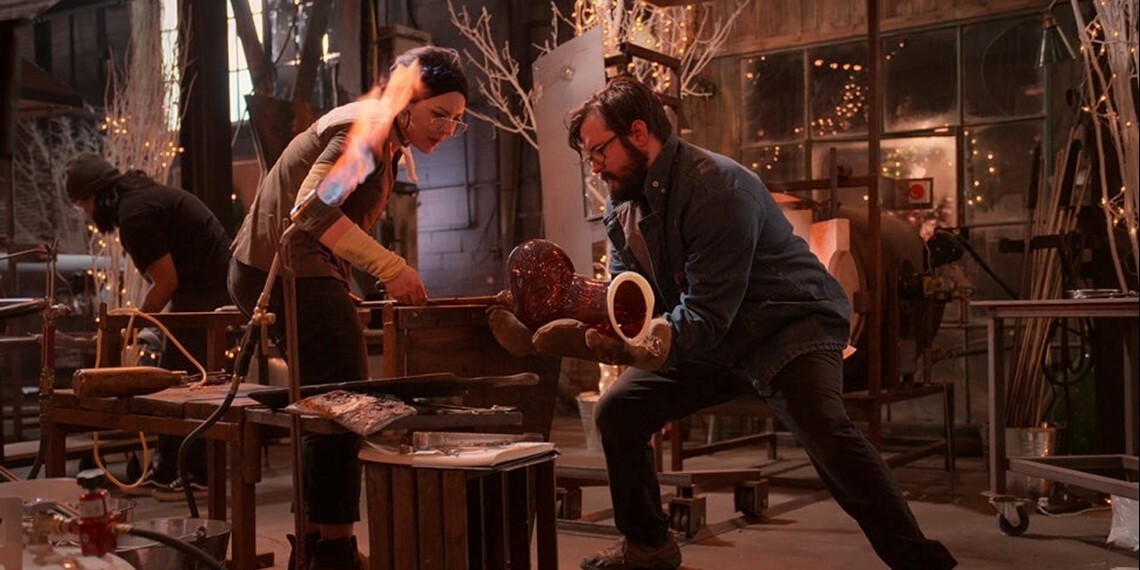 ‘Blown Away: Christmas’ on Netflix is the holiday edition of the glassblowing competition show, ‘Blown Away.’ The new series brings back five popular contestants from the first two seasons of the flagship show, as they create beautiful designs in the holiday-themed challenges. In the Christmas special series, they compete for a prize pot of $20,000, of which the winner will get to share half of it with a charity of their choice.

The series is a part of the ‘Blown Away’ franchise, which has received a spectacular response from audiences worldwide. Although it is a competition show, critics and viewers were drawn to the camaraderie among the contestants. Moreover, the franchise also celebrates a unique skill, which we do not see much of onscreen. So, if you have already binge-watched the freshman run of ‘Blown Away: Christmas,’ you must be eager for more. On that note, let us discuss the prospects of the show’s second round!

‘Blown Away: Christmas’ season 1 released in its entirety on November 19, 2021, on Netflix. The first season has four episodes that run for 28-29 minutes each.

With regard to the second installment, here is all that we know. Netflix has yet to make a formal statement regarding the show’s future. But it looks like there is no rush, given that the show revolves around Christmastime, which leaves a big window to complete production of a new season if renewed. Moreover, Netflix usually spends a few months assessing how a show performs and only gives it the green light for another installment if the streaming giant deems it profitable.

For the show’s first season, the production team had to work around the challenges and restrictions imposed as a result of the pandemic. So apparently, the cast and crew could not begin filming until early 2021. Even then, they had to work on a very tight schedule. Therefore, if the show is picked up for a new round by early 2022, we can expect another installment well in time for Christmas in 2022. With that said, fans can expect ‘Blown Away: Christmas’ season 2 to release sometime in Q4 2022.

The first season is presented by interior designer and television personality Bobby Berk. He is also the Founder and CEO of his LA-based design firm. A resident design expert on Netflix’s ‘Queer Eye,’ Berk featured as a guest judge in the second season of ‘Blown Away.’ For season 1 of the Christmas-themed series, Berk was accompanied by resident evaluator and glass master Katherine Gray, who also appears in the original show. In addition to appearing on reality shows, she teaches at California State University, San Bernardino. Therefore, if the series returns with another installment, we can expect both of them to resume their respective duties.

The debut season had an all-star cast of sorts as five fan-favorite contestants from seasons 1 and 2 of ‘Blown Away’ competed in the holiday special show. They are Cat Burns, Alexander Rosenberg, Edgar Valentine, Andi Kovel, and Nao Yamamoto. However, it is unlikely we will see them again if the show returns with a sophomore season.

There is a possibility of seeing a different set of contestants – perhaps some familiar faces from the parent show and others who might be new to the franchise. However, we can expect the potential season 2 to be bigger and better as the pandemic-imposed restrictions may no longer be an issue. Apparently, that is what resulted in the abbreviated first season that only featured five contestants instead of ten (as seen in ‘Blown Away’).

Read More: Where is Blown Away: Christmas Filmed?