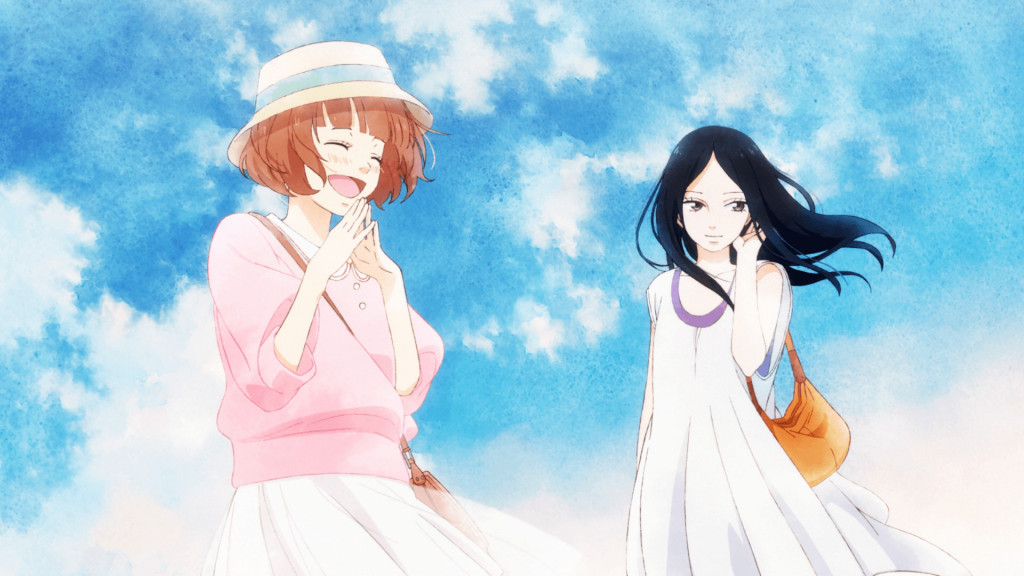 ‘Blue Spring Ride’, or as it is more popularly known in Japan, ‘Ao Haru Ride’, is a Japanese shōjo manga series written and illustrated by manga artwork specialist, Io Sakisaka. Sakisaka is best known for her contribution in the Japanese anime film, ‘HAL’ and the more recent manga series, ‘Omoi, Omoware, Furi, Furare’. The manga was first published in the February, 2011 issue of ‘Bessatsu Margaret’, a popular magazine by Shueisha and continued till February, 2015, producing a total of 12 tankōbon volumes.

Various publishing fronts have acquired rights to the manga in various languages and as a result, it has been translated to a number of languages including Chinese, French, German and Italian. However, an English version is presently in development as announced by Viz Media in their ‘Anime Boston 2018’ panel. It is called ‘Au Haru Ride’ and can be expected to be released sometime at the end of 2019. The original Japanese manga managed to sell about 5.84 million copies as of May 9, 2014.

The anime television series is produced by Production I.G and directed by Ai Yoshimura. It is quite well received by fans and also generated a lot of hype on release. The first episode premiered at midnight on July 7, 2014 on Tokyo MX. Praise was targeted towards character design and the soundtrack. The anime is presently licensed by Sentai Filmworks in North America. Also, a live action film is directed by Takahiro Miki, a notable filmmaker in Japan. It was released on the December 13, 2014 and stars Tsubasa Honda as Futaba Yoshioka, Izumi Fujimoto as Yūri Makita and famed Japanese actor and model, Ryō Yoshizawa as Aya Kominato. Masahiro Higashide plays the role of Kou Mabuchi and Japanese actress Yua Shinkawa portrays Shūko Murao. The film was highly successful and managed to generate a total of US$16 million (which translates to roughly ¥1.90 billion) at the Japanese box office.

Blue Spring Ride Season 2 Release Date: When Will it Premiere?

‘Blue Spring Ride’ season 1 released on July 8, 2014 and ended its 12-episode run on September 23, 2014. A second season of ‘Blue Spring Ride’ is highly unlikely since there have been no developments of the same over the course of 6 years. However, one might believe that the show will be brought back, given the fact that the anime ended quite abruptly and fans were dissatisfied with the ending, especially because it fails to cover the entire story of the manga. But 6 years have passed and we are yet to hear a single word about development. Our best guess is that ‘Blue Spring Ride’ season 2 release date could fall sometime in 2021 or 2022. We will update this section as soon as we hear more.

Though the original manga has been translated to a number of languages, we are still waiting for an English version and the same is the story with the anime. There have been no official English dubs for the show but the Japanese version with English subtitles can be presently streamed on Crunchyroll.

The entire plot of ‘Blue Spring Ride’ revolves around the antics of Futaba Yoshioka, a 17-year-old high school student suffering from an inferiority complex. Despite being a popular girl in school and the object of desire for many guys around her, she fails to connect with the girls around her constantly. She tries to fit in with the crowd by taking part in activities that other normal girls take part in, but to no avail. In a desperate attempt to fit in, she begins to undermine and demean the guys around her, thinking that it will lead to more attention from her female classmates. There is a history of her peers being jealous of all the attention that she gets from the guys and she feels that such rash behavior will change their mindsets.

However, even such an endeavor falls flat on Futaba’s face, at which point she gives up the act and proceeds to accept the reality. During this time, two events take place that completely change her life and her perceptions. The first event takes place when Futaba suddenly reunites with her old friend and lover, Kou Tanaka. Kou had shared the same feelings for her and the couple was devastated when Kou had to move away due to problems in his family. His mother decided that it will be better for Kou to study at Nagasaki, at which point he was forced to abandon the relationship completely.

Now, after meeting Kou for the first time in years, she is very excited to reconnect with him. For once, she feels that she will be able to experience love again as she did back in high school but upon actually meeting and talking with Kou, her dreams are shattered yet again. She discovers that Kou has become a completely new person with a very different take on life that has altered his personality. He now goes by his mother’s surname ‘Mabuchi’, instead of his ancestral name, ‘Tanaka’ but these are not the only changes. The seemingly friendly and outgoing person whom she fell in love with back in high school has transformed into a cold heartless stoic, one with a complete and utter disregard for other’s feelings or emotions.

The second event takes place when Futaba, who’s yet again led astray by her emotions and expectations, turns to her middle school friends for support. This is where we are introduced to the character of Yuri Makita, her classmate back in the day, and also a fellow outcast. Unlike Futaba, Yuri is quite confident of her ‘cute’ outlook and is completely oblivious to the fact that her peers don’t engage with her. She stays in a world of her own, but after meeting Futaba, she begins to hang out with her.

The two of them soon start sharing secrets and ultimately connects with each other over the fact that they could not connect with others and were left ostracized by their classmates. Even though Futaba doubts Yuri’s friendship at first (later fueled by the fact that Yuri develops a crush on Kou), Futaba still hangs out with her since they have no one else. It is at this moment that Futaba comes to know that Kou has been assigned to their class despite him being supposed to be in a special advanced class. Futaba and Kou begin spending a lot of time together since they are studying in the same class and are also chosen as class representatives. Yuri also starts spending time with them as she holds the position of event representative. They are joined by another outcast Shuko Murao and her admirer Aya Kominato and the five of them proceed to take part in various activities together.

Futaba Yoshioka: A 17-year-old teenager and the main protagonist of the story, Futaba is suffering from identity crisis and social anxiety. She is led to believe that her popularity among boys is the reason behind her being ostracized by her classmates and she proceeds to demean and look down upon boys who had a crush on her in an attempt to be popular. She is still not able to connect with her classmates, and that is when she meets her old friend Yuri and her long lost lover, Kou. She develops a special bond with Yuri and the two of them eventually become best friends.

Kou Mabuchi: Kou Mabuchi, or Kou Tanaka as he was previously known back in middle school, is the male protagonist of the story. He used be romantically involved with Futaba in middle school until he was forced to abandon the relationship after relocating to Nagasaki due to problems in his family. After returning, he joins the same school as Futaba and the two resume their friendship, albeit with a rough start. Life in Nagasaki has completely changed him, as Futaba painstakingly finds out and he has become an extremely rude and emotionless person. He has also changed his ancestral name ‘Tanaka’ to his mother’s surname ‘Mabuchi’, leading one to wonder whether the two events are interconnected. He is the object of desire for many of his female classmates, including Yuri who also happens to be Futaba’s friend.

Yūri Makita: Another social outcast but surprisingly strong and outgoing about her stature, Yuri Makita develops a bond with Futaba over the fact that they are both shunned by their classmates. However, being the strong and confident character that she is, she doesn’t mind her ‘cutesy’ look or the fact that she is not well received by her peers. Completely oblivious to the outer world, she and Futaba begin to live their lives together like two sides of the same page. She develops a crush on Kou and is jealous of the fact that Kou and Futaba are extremely close to each other but lets it pass for the sake of their friendship.