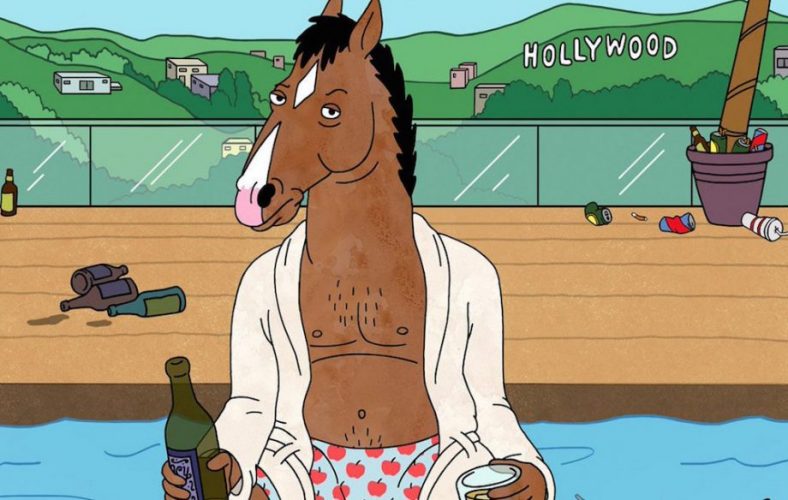 The FINAL episode of ‘Bojack Horseman’ begins with Bojack and Diane standing next to each other. An electrocardiogram line spikes and dips on the screen above them till it takes over the entire screen. The line stabilizes and becomes straight. The scene changes to a doctor putting a bed sheet over Bojack’s body, confirming his death.

However, a newspaper report soon reveals that Bojack is not dead!!! However, he is tried at court and gets sentenced to fourteen months in prison. Mr. Peanutbutter picks Bojack up when he gets released from prison. Both of them are going to a wedding. Princess Carolyn is getting married to Judah.

Mr. Peanutbutter takes Bojack to a press event that he has to attend since it is on the way to the wedding. The event is for the re-installation of the letter D in the “Hollywoo” sign. However, the letter turns out to be a ‘B’ and the sign now spells “Hollywoob.” Todd takes Bojack to the beach to watch the fireworks and because the former sees Bojack feeling uneasy at the wedding. Bojack returns after the wedding has gotten over. Princess Carolyn tells him that this is not the real wedding. The party is just for the industry so that Princess Carolyn can use it as a networking opportunity.

Diane is smoking on the roof. Bojack joins her for a conversation. Diane brings up the last voicemail that Bojack sent. She is upset that he wasn’t sober. She is upset as she felt responsible for having left Bojack to fend for himself when she moved to Chicago. Diane accuses Bojack of making her feel like she was responsible for his well-being.

Moreover, Diane tells Bojack that she decided not to move with Guy to Houston due to Bojack’s voicemail. She broke up with Guy after trying a long-distance relationship. Diane apologizes and thanks Bojack after implying that she intends to not be in his life any more. Bojack tells Diane about an incident at prison. Then, the two of them just sit on the roof and share awkward silence. This is where the episode, the season and the series ends…

What works for the finale is the fact that it is a fitting resolution to the titular protagonist’s journey. Meaningful conversations make up a large chunk of the series. Change is vehemently visible. In fact, it can be easily asserted that ‘Bojack Horseman’ is the best show to capture change after ‘Breaking Bad.’ Quality television or storytelling in any medium is always about change. No change=no progress/advancement in plot= lousy writing.

What’s more? The finale also features nods to the show’s legacy. And the series has definitely cemented its place in popular culture. It is here to stay, and nobody, not even Bojack can fuck that up. For instance, the Hollywoo sign reference takes viewers right back to the first season of the show. It is not just the show’s characters that have come a long way. All of us who have seen ‘Bojack Horseman’ has.

A few fans might have expected more action or inventiveness from the conclusion. However, as mentioned earlier, that would have not served the characters’ journey as effectively.

The change in Diane and Bojack’s relationship is definitely a landmark moment for both the characters. Moreover, it feels like a solid, believable turn of events. Why should Diane sacrifice her own wants and always worry about Bojack? Bojack NEEDS to be pushed into fending for himself so that he can stop leaning on/blaming people throughout his life.

In conclusion, I have to add: I am glad the show is over. The fact that viewers do not long for more is not an indication of poor quality but of the terrific command of the writers on the show’s narrative. The end is the end. The characters have successfully completed their journey and there is nothing more left to see. So, its curtains. Standing ovations are allowed but shrieks of “once more” aren’t.