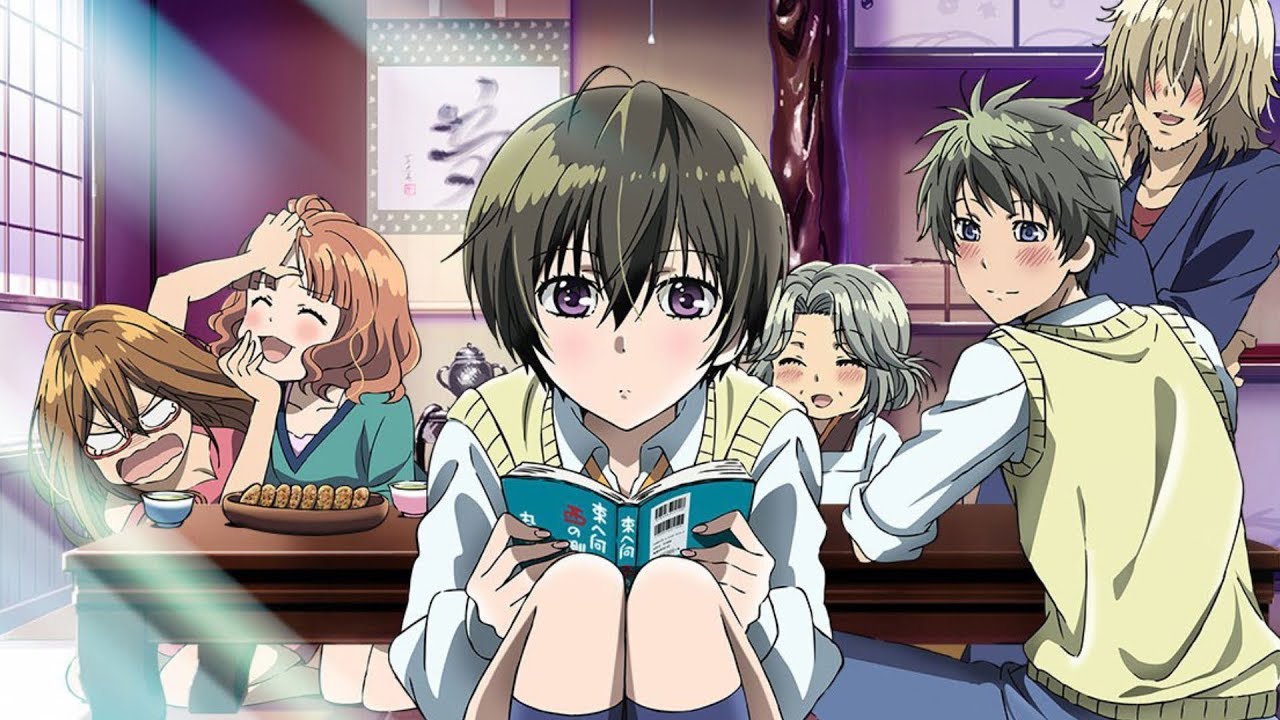 ‘The Kawai Complex Guide to Manors and Hostel Behavior’ is a show that likes to have a lot of fun with itself. It makes the use of word plays and gags to create some hilarious comic situations and uses the eccentric personalities of characters to often poke fun. While the story of the anime is pretty generic and straightforward, it’s these goofy characters who add a lot more color to it. The problem with it is that even after hinting a possible romance from the beginning itself, it never really explores that aspect of the story and just leaves it as it is. You’re constantly forced to ask yourself the “will they or will they not” question, but in the end, your patience as a viewer is not exactly rewarded. Individually, even the characters are not all that great, in fact, the main character is quite annoying a lot of times. But it’s the relationships of these characters that shine really bright and make the anime quite enjoyable.

The artwork is very unique and shiny which will appeal to most of the viewers. Even texts are often incorporated for emphasizing on certain ideas and also to enhance the whole viewing experience. The characters have a lot of detailing to them and their intense expressions are designed in such a way that they add more charm to the humor. When it comes to the background, it usually involves the dorm room and is quite simple. The opening theme is quite catchy and suits the upbeat nature of the show and the background scores are noticeable but not impactful in any way. Overall, with its diverse characters and a very simple story, ‘The Kawai Complex Guide to Manors and Hostel Behavior’ is something that can be enjoyed by pretty much everyone. Just make sure that you don’t expect it to be much of a romance story and instead try looking at it as a coming of age tale.

‘Bokura wa Minna Kawaisou’ season 1 premiered on April 4, 2014 and with a total of 12 episodes, it ended on June 20, 2014. It hasn’t been too long since the anime first premiered so we cannot just dismiss the possibilities of its renewal by simply considering the number of years that have gone by since its initial release.

Also, the anime covers the story of the manga all the way to the end. It does skip a few chapters here and there but the conclusion of both is quite similar which leaves us with no source material at all. So if you’re a big fan of ‘The Kawai Complex Guide to Manors and Hostel Behavior’, the only way you can get your hands on more of its content is by reading the manga. The anime also has a pretty average rating on most platforms so it would be rather surprising if it ever gets renewed. Though the chances are extremely low, the anime may only get a season 2 if the mangaka decides to write more volumes of the source material. If that ever happens, we will surely update you about Bokura wa Minna Kawaisou season 2 release date.

An official English Dub of ‘The Kawai Complex Guide to Manors and Hostel Behavior’ is not yet available. But you can still stream the anime on Crunchyroll with its original Japanese audio and English subtitles.

‘The Kawai Complex Guide to Manors and Hostel Behavior’ revolves around a high school student named Kazunari Usa who is forced to live all by himself after his parents start working in a different area. Eager to live a whole new independent life now, he hopes that he’ll be able to live peacefully without dealing with any kind of strange people. But little does he know that the students who stay at his boarding house don’t even come close to being ordinary.

The boarding house Kawaii Complex is the home for all kinds of eccentric young characters. This includes his own roommate, Shirosaki, is a big-time pervert; a frustrated office lady named Mayumi who hates all couples because of her own bad luck with men; and many others who are all unique in their own freaky way. As soon as the reality of the place hits him, he decides to leave. But everything changes when he runs into one of his seniors, Ritsu Kawai and instantly finds starts to fall in love with her.

When his parents decide to move to a new place for work, Kazunari tells them that he is willing to stay anywhere as long as he gets to be alone. This is when his journey at the Kawai Hostel begins where initially, he has a tough time getting along with all the eccentric people present there; especially his perverted roommate. But when he meets a beautiful senior named Ritsu Kawai, he changes his mind and decides to stay just to get to know her better. He starts working part-time at the Kawaji House but really hates what he does there. But again, he decides to stay there after Ritsu takes a liking for his Cafe Uniform.

When it comes to his appearance, he has messy brown hair and big blue eyes. He is quite tall for his age and is usually seen in his school uniform. He is quite friendly to most people around him and is also very tolerant of the annoying personalities of those who stay at the hostel with him. From time to time, he also shows great leadership skills at his Cafe job. He is also a little clumsy and easily makes a lot of mistakes. When he was in middle school, he would often attract a lot of weirdos and this led to him being nicknamed as the “freak show ringmaster”. This is one big reason why he wanted a normal life away from his parents.

Ritsu Kawai is another resident at the Kawai Complex who moves there after her mother goes abroad for work. She is a second-year student at the same high school as Kazunari and her grandfather is actually the brother of the manager of the hostel. Often, when the manager is out of the house, he asks Ritsu to look after the dorm. She keeps several weapons in different parts of the place and does not hold herself back when it comes to using these on boys who try to get into the girls area.

In appearance, she is a beautiful girl with short brown hair and deep violet eyes. She is anti-social and instead of interacting with those around her, she prefers to stay alone and read books. She even claims that she would rather have no friends at all than have friends who are not even interested in her. Every time someone at the dorm offends her in any way, she threatens them by saying that she will double the rent that they’re paying. But otherwise, she really cares for the members of the dorm and even stands up for those who are being mistreated there.